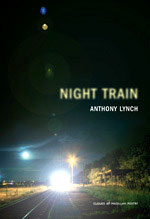 Lynch’s first book of poetry, Night Train, contains poetry written with a fine eye for detail and a storyteller’s uneasy observations. Poetry often gives us the interior journey of the poet’s mind as well as the intimations of all they hold dear. His work is subtle, compassionate, eerie and hangs its last lines into the ether, as if we can follow or not, interpret or accept. His voice is one that swerves and climbs, while we view his world as if from the window of a train, often with our breath against the glass, sometimes with the frame down.

There are three sections to this book – Topography, Interiors, Splitting space – and there is a puzzle-nature in determining the intent of some poems which requires multiple readings.

With the word ‘Topography’, we think landscapes, maps and geographies. The poems in this section engage with the natural world, specifically the landscapes of Lynch’s home-place.

The presentation of the ‘real’ is concrete, visceral. There is a richness of image but it is sparsely used. In ‘Topography’,

Lynch has a way of using words that strengthens them as they are presented in a novel, often slanted way: a fox is ‘brushtailing into dusk’ and an animal wail is ‘scoring’ the night. This skill brings an energetic newness to words.

Corio Bay, Geelong, Point Lonsdale, Queenscliff all light up in his line of vision. He knows them well. On the ferry from Queenscliff to Sorrento:

In the title poem, ‘Night train’, we are given the slideshow as it will unfold through the book. The ‘clone of self’, foggy anachronisms of the past, the country represented by the You Yangs, ‘industrial gothic’, the city of Geelong, and the personal: ‘The hospital you were born in. / The school where you were clapped / and buggered, the church / where you begged forgiveness. / Your whole life’.

In this poem and in the anthropomorphic ‘Jaguar’, possibly the most visceral poem in the collection, there is an energy charge through the interconnection of memory and idea:

And again in ‘Light’, a gentle loving exploration of day opening, we can see the grip the poet has on small things. The poem is moving in its simplicity and sense of truth:

And finally into that domestic world: ‘A plane comes and tells us / of the bigness of things.’

Dr Robyn Rowland AO has published nine books, six of poetry, most recently Seasons of doubt & burning. New & Selected Poems (2010) representing 40 years of poetry. Her poetry has appeared in Being Human, ed. Neil Astley, (Bloodaxe Books, UK, 2011). Silence & its tongues (2006) was shortlisted for the 2007 ACT Judith Wright Poetry Prize. Rowland is winner of poetry prizes, including the Writing Spirit Poetry Award, Ireland 2010. She is an Honorary Fellow, School of Culture and Communication, University of Melbourne, Australia and a member of the National Advisory Council for Australia Poetry Ltd. Rowland curated and presented the Poetry & Conversation Series for the Geelong Library Corporation, 2010-2012. She is currently working on a bi-lingual book with Dr Mehmet Ali Çelikel in Turkey.

View all posts by Robyn Rowland on Cordite →