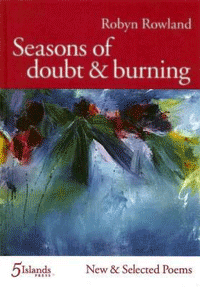 Robyn Rowland’s poetry career spans thirty years, with her first book, Filigree in blood, appearing in 1982. Reading this volume of new and selected poems is a journey in memory, an almost autobiography. I first heard Rowland read in 1982 at the Sydney Women Writers Festival and I was very taken by her ability to phrase poems in just the right way so that a listener can follow and take in her meaning. Indeed, for some of her poems in this collection, it was as if I had Rowland’s voice in my head – no easy task for a writer to achieve that. It means that the rhythm or pace or vocabulary is just right.

Seasons of doubt & burning begins with new poems, among them a number of powerfully wrought pieces. These poems travel between the known and the new; the known in the recollections of places lived in, the new in reflections on places newly visited like Japan and Turkey in the long poem ‘Cherry Blossom Dreaming’. This poem manages to convey long histories of empire and poetic tradition in a form that picks up on the long lines of Rumi’s ghazal form while the second part of the poem takes a surprising turn in a meditation on Japanese kamikaze pilots. What is extraordinary is the way Rowland gets inside the head of a man on his way to death.

I am still reeling from the poem ‘Snap frozen’ which has forceful punch to it. There is a moment while reading when you realise what is happening to a girl on the beach, what has happened to too many girls on too many beaches. It is the ordinariness of the memory which fuels the poem, and yet it is the way those memories get shifted in the discourse about what is art that captures the reader.

There is a refrain:

But if nothing had happened, nothing in a young girl’s mind, then why could she not return to that ordinary beach?

Seasons of doubt & burning is peopled by an array of individuals who come in and out of focus at different periods of the poet’s life: the mother, the father, the children, the partners and friends. All are real people. They live on the page and Rowland’s ability for characterisation is second to none. These people are there during times of loss and pain, times of joy and confusion.

Individual lines hit the brain and stay there:

Or the contrast between:

Each of these lines convey a depth of emotion without selling out to cliché. The imagery carries the line and takes the reader to a place where one’s own emotions can also be accessed, re-experienced, reflected on. This, surely, is part of the work of poetry.

The poems, while packing emotional punch, do not wallow; instead the intellect is also pressed into service. There are the untold stories of Jimmy and Ethel Governor, Australian outlaws and other histories of colonisation still being played out a century later. The unrequited love poems from Perverse Serenity pick their way through the contrasting landscapes of Ireland and Australia. The rhythm of these poems – ‘Young men’, for example – carry the reader along as if participating in a song. So it’s not surprising that some of Rowland’s poems have been set to music. The music exists inside them.

Health, pain, and reflections on death round out the collection. The sequence of ‘Dead Mother Poems’ touches vulnerabilities in all of us. The complexity of relationship, the conflict between love as possession and love as letting go rumbles into most of our lives at some point. That the poet is able to walk through the memories – not unflinchingly but rather flinching in all places where it hurts – is testament to her ability to keep going, surviving pain, surviving love.

One poem in the New section that surprised me is entitled ‘from Literary Creatures’. It is a poem in which the minutiae of three sea creatures are examined. These are not creatures readily imagined as the subject of literature but each turns out to have surprising qualities. First is the ‘solitude of cuttlefish’ who turn out to be incredibly smart. Some are destined for a kind of marine danse macabre. The Xiphosura – or horseshoe crab – is next, not in solitude but in colony. The poor female of the Xiphosura tribe must drag the males up the beach to ensure the next generation.

By contrast, the female seahorse has it easy. She hands the gestation over to the male and escapes in the sea’s wash. I kept returning to this poem with its marvellous images and quirky reproductive systems. What entices me is that Rowland has managed to create characters from these strange otherworldly lives.

There are many moments when landscapes are imagined in such a way that you’re rendered unable to see the world in the same way again:

The moon, a subject so frequented by poets, lives anew in this poem. I recognise that harem grille of cloud. And when I see it again, I’ll be thinking of this collection, this moon, this poet.

This entry was posted in BOOK REVIEWS and tagged Robyn Rowland, Susan Hawthorne. Bookmark the permalink.

Dr Susan Hawthorne is a poet and a publisher. She co-founded Spinifex Press in 1991 and is the author of six collections of poetry the latest of which is Cow (forthcoming 2011). To check out Spinifex titles go to Spinifex Press and for eBooks click through to eBooks. She has supervised PhDs in writing and publishing for many years at Victoria University and is Adjunct Professor in the Writing Program at JCU. Her previous book, Earth's Breath was shortlisted for the 2010 Judith Wright Poetry Prize.

View all posts by Susan Hawthorne on Cordite →