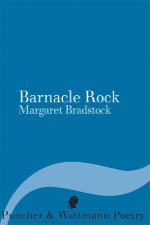 Barnacle Rock is time-travelling through poetry. Its significance lies in Margaret Bradstock’s successful inscribing of a journey, from the search for a land of plenty by various explorers, to the position we find ourselves in now: a climate in crisis, a civilisation in error and a country which has displaced its indigenous people, replacing their knowledge with a rusted ‘progress’. Dense, a rich read, it alerts the mind into awareness.

The book is in five sections beginning and ending in the ocean, where, ironically, ‘life’s a beach’. The first recalls those seemingly endless voyages to a place that was half-imagined, ‘the missing continent’, the ‘home of idolators and abundant gold’. We travel with those fearless explorers – Portuguese, Dutch, French and British – who sailed long distances to find the desired land of riches. I think it is interesting to also read this as symbolic of a journey in search of what we as individuals desire – that when found, is easily corrupted, misconstrued, misunderstood – rarely what we expect. The book is a metaphor for the soul’s search, perhaps.

These seafarers saw so many natural wonders – sunfish, new lands of scarps and bush forests –yet Bradstock tells us that ‘the mountains of Illawarra reminded / Banks of the back of a lean cow’, even his ‘transmutant gaze’ saw only ‘anorexic country’ with its bare bones (‘Trompe-l’oeil’). And de Surville:

The final poem in this section sees Mawson struggling to reach safety while in:

Beside these struggles for survival there are the tougher battles of ‘the other’: the indigenous –passed over and silent; and the convict, so brutalised, so ‘tired of this life of prison time that passes for real time … you prayed to be hanged’ (‘A Memoir (thumbnails) of Convict Davies, 1824’). What remains from these searches are remnants: Leichardt’s ‘fragments of moleskin trousers’, huts, wrecks, the Mahogany ship, things buried in sand, diaries and perhaps ‘the great harp of the wind’, that ‘might measure the soul of a man’ – while we are left questioning what was found.

Because the first section focuses on history, it has by necessity to fit in information that keeps the reader inside the poem. Bradstock achieves this while not sacrificing poetic craft. Imagery is effective where it occurs, and the free-verse rhythm almost an undulating ocean.

Where the indigenous population was silent, the second section is enlivened with its voices and perspectives, with a sense of its belonging. Yet this is ushered in with a powerful poem on not belonging. ‘The Promised Land’ is one of the strongest poems in the book for its imagery and multilayered meaning: ‘You said you’d “found your spot”’, Bradstock’s speaker notes, yet:

The question that drives the poem is: ‘what else were they hoping for … not this panorama of human entrapment … of incompletion, failure, loss / while always pursuing some greater shining vision’.

Poems on the continent’s interior are short, clear and uncluttered. Where the European explorers found emptiness, here it is peopled with old story, meaning-filled landmarks, dreaming. There is a sense of the heart of something beyond the smallness of humanity, a landscape for those in search of soul-country. ‘Desert saint’ or not:

If I were to choose the strongest poem in this excellent collection it would still be the title poem, Barnacle Rock, last in section II. It could even have come first in the book as a stand-alone section, the ‘mirage of sail’ leading us into the old explorers and their ships; the barnacle representing the creation of modern Australia, the accretion of layering clinging to the Great Rock. Beautifully written, subtly moving, it encapsulates the journey, signposts the stopping points and rings out the message that ripples though the book, beginning:

And it finishes where:

The third section is suburban life with its energy and an underlying uneasiness that something is becoming stilled by it, rusting away. ‘The White Palace’ encapsulates this lack of permanence: ‘I threw out the journal entries / when I packed up my life / and moved on’, yet we know from section I that diary entries are what give us perspective on history.

We move up country, out of country to close-lying neighbours, with powerful poems on Asia and the striking poem ‘Long Phuoc revisited’ – a reminder that modern Australia, too, has played its part in invasive destruction. Definite lines again make multiple meaning:

This section finishes with two deeply moving poems for the poet’s father, ‘Ask not’ and ‘The River’ – in which we are so present in his ‘nights on the Monaro / stars burning like dry ice’, and on the river – the river of many names that eventually carries us all:

Lighter and with some humour, section IV gives us Bondi, Clovelly, Port Macquarie, Sydney Cove, pond life, sea life – all the golden beauty that Australian coast can give, and its hidden threats, from small sea-lice to big sharks – ‘it’s the food chain / and you don’t want to be a part of it’ (‘Shark Alert’)

As we finish that section, ‘Conversations from the bottom of the Harbour’ turns us towards the politics of the final section of the book. Beginning with ‘The catechism of loss’, there are seven intense poems of anger, defiance, regret, and loss. Their messages carefully crafted, they are punchy vignettes of what we’ve brought to the present: Fukushima nuclear disaster in Japan, leaking contaminated water from the Ranger uranium mine, the North pacific Garbage Patch:

Pages: 1 2
This entry was posted in BOOK REVIEWS and tagged Margaret Bradstock, Robyn Rowland. Bookmark the permalink.
Dr Robyn Rowland AO has published nine books, six of poetry, most recently Seasons of doubt & burning. New & Selected Poems (2010) representing 40 years of poetry. Her poetry has appeared in Being Human, ed. Neil Astley, (Bloodaxe Books, UK, 2011). Silence & its tongues (2006) was shortlisted for the 2007 ACT Judith Wright Poetry Prize. Rowland is winner of poetry prizes, including the Writing Spirit Poetry Award, Ireland 2010. She is an Honorary Fellow, School of Culture and Communication, University of Melbourne, Australia and a member of the National Advisory Council for Australia Poetry Ltd. Rowland curated and presented the Poetry & Conversation Series for the Geelong Library Corporation, 2010-2012. She is currently working on a bi-lingual book with Dr Mehmet Ali Çelikel in Turkey.