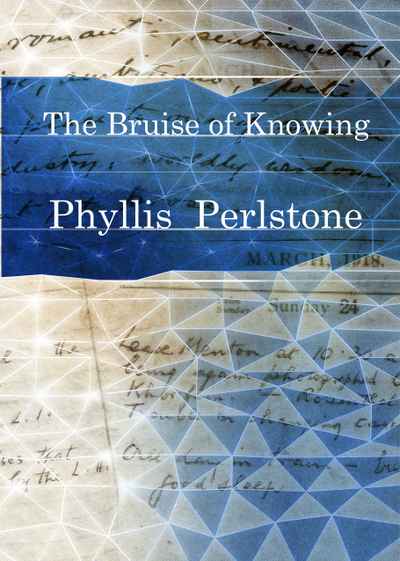 The Bruise of Knowing by Phyllis Perlstone
Puncher & Wattmann, 2019


The Bruise of Knowing is Phyllis Perlstone’s third collection of poetry from Puncher & Wattmann, and arguably her best to date. It tells the story of Sir John Monash, highlighting themes of ambition, power and warfare. A talented engineer and commander, Monash’s progress was conflicted by religious bigotry, the rise of feminism, and a growing awareness within himself of the devastation wrought by war. But this is not just history, although the Australia and Britain of Monash’s lifetime are vividly recreated. Perlstone selects revealing episodes of strength and weakness in her protagonist, interpreted through poetic devices that allow the reader to experience undercurrents well beyond the series of events. At the same time, this anecdote is counterpointed with several parenthetic poems drawing the writer-researcher into the framework and underlining current concerns with the encroachment of the built environment on the natural.

Part 1, shifting back and forth in time, deals mainly with the nineteenth century. The collection begins with the poem ‘Two Incidents as Engineer …’ in 1901. In this poem, the language is deliberately hard-edged and precise in its description:

The impact is heightened by concrete, enjambed lineation and broken syntax, brief lines directing emphasis to where the poet wants us to pause and absorb. In this poem, also, the reader is given early notice of Monash’s ‘greatest regret’ for the needless ‘loss of life’:

By contrast, in poems such as ‘In the new Barangaroo Reserve’, we are offered Perlstone’s perspective on the resultant feats of engineering:

She follows this with ‘Barangaroo’, where her evocation of the natural world is uplifting:

Monash married Victoria Moss in 1891. Three months later, diagnosed with suspected tuberculosis, she was convalescing with her sister in Beechworth, Monash travelling back and forth by train from Melbourne. As Perlstone notes, ‘The Law and its outlaws / mixed in Beechworth’, none the least the infamous Ned Kelly. She describes the settling of power that happened here:

A disputed mythology has grown up, linking Monash to Ned Kelly, as in Peter FitzSimon’s 2014 biography of the bushranger. Perlstone has eschewed including any such incident but uses the iconography with metaphoric force. She introduces an attested meeting between Kelly and Monash’s father (in Jerilderie) and suggests Monash’s later interest in the Kelly Gang. In an ekphrastic poem ‘The Slip’, based on a well-known painting by Nolan, the horse’s fall from a ‘precipitous’ height is perhaps reminiscent of Monash’s own trajectory.

In this first section of the book, Perlstone begins to show the uneasy relationship existing between Monash and his wife Victoria (or Vic). This, she mostly develops through interpretation of photographs and artworks, with an impressive sensitivity to bodily language and gesture, as in the poem ‘1898’:

The rift appears more strongly in ‘An Early Photo of Monash and Vic’:

The continuing disintegration of their relationship is interwoven with related themes including the growing rise of feminism and husband’s and wife’s opposing responses to it:

Once again, the poet’s voice interposes, interpreting and responding to emotional overtones, as in the visually evocative ‘Damp Window in the Rain’:

Pages: 1 2
This entry was posted in BOOK REVIEWS and tagged Margaret Bradstock, Phyllis Perlstone. Bookmark the permalink.
Margaret Bradstock has eight published collections of poetry, including The Pomelo Tree (winner of the Wesley Michel Wright Prize) and Barnacle Rock (winner of the Woollahra Festival Award, 2014). Editor of Antipodes (2011) and Caring for Country (2017), Margaret won the Banjo Paterson Poetry Award in 2014, 2015 and 2017. Her latest collection, from Puncher & Wattmann, is Brief Garden (2019).