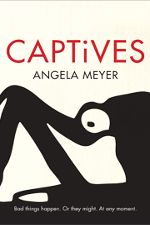 Fittingly tiny by way of physical size, Captives is a beautifully produced collection of micro-fiction by the Melbourne author and critic Angela Meyer (known also as the blog writer, Literary Minded). While in a poetry-dedicated journal such as Cordite Poetry Review, it may seem odd to be reviewing a book that makes no explicit claims to being poetry – or, more specifically, the difficult-to-define mode of prose poetry – Meyer’s micro-fictions do seem to invite comparisons with contemporary prose poetry. In this sense, Captives inhabits a curious place in contemporary Australian literature, in which the likes of the finely produced anthologies by publisher Spineless Wonders assemble prose poetry and micro-fiction together routinely – often without signalling a difference between forms. Couched more decidedly as ‘flash fiction’ – ‘fiction on speed’, as per the publisher’s website – Seizure publishes prose between 50 and 500 words weekly in their online ‘Flashers’ series. Overseas, writers such as the 2013 winner of the Man Booker International Prize, Lydia Davis, have also garnered renewed attention for very short prose. Davis’s stories span from short to extremely short: from a few pages to narratives distilled in a single sentence.

In his introduction to Great American Prose Poems: From Poe to the Present, David Lehman defines a prose poem as poetry that ‘works in sentences rather than lines’. Lehman writes: ‘(j)ust as free verse did away with meter and rhyme, the prose poem does away with the line as the unit of composition. It uses the means of prose toward the end of poetry’1. Davis, likewise, refers to poetry vs. prose in terms of ‘the suspension at the end of each line, as opposed to the pause at the end of the sentence’2.

It isn’t the intention of this review to focus on the nomenclature of forms, nor to tease out their nuances or offer any definitive distinctions. Certainly though, Meyer’s fiction demonstrates a number of poetic qualities. Her language is precise and potent. These very short stories also express a keen interest in and eye for narrative. There is action, tension and suspense. Conflict and, in most cases, irresolution, as in the story ‘Thirteen tiles’, which provides a powerfully claustrophobic and suitably compact reading experience. As the book’s cover blurb reads: ‘Bad things happen. Or they might. At any moment.’

The collection opens with ‘The day before the wedding’, in which a woman runs ‘out onto the marsh, her long dress wet and heavy between her legs’. The story, less than a palm-sized page, is sensory, startling. In spare prose, suggestively dark and unsettling, we read:

Stop! she called as shots rang and ducks fell. Stop! to the men and the dogs in the blue dawn.

She saw her love through a hood of dew and halted, her lungs dragging wet air. He had the gun trained on her.

Bang! Another duck pivoted sideways and spun towards the ground. That was her cousin’s doing.

The woman, the man, the cousin, and the ducks: all are held in a moment of urgency and uncertainty. The story closes within two more paragraphs (the sum of three sentences), and the absence of an altogether explicit explanation works powerfully, here as elsewhere in Captives.

In ‘We’ve always been close’, a sister’s guilt surfaces during a dam swim – the dam ‘full from the recent storm’. The narrator, regarding her sister, tells: ‘Now she kept family memories alive that I let slip, like the peanut butter and sauce sandwiches our grandfather used to make us. Like the names of our dolls.’ There is a concurrent sense of wistfulness and distancing. The scene’s mood and clues – references to honesty and disloyalty – gain uncomfortable context via mentions of the sister’s boyfriend, and the story doesn’t need to expound. As throughout this collection, subtext is vital.

The space beyond the stories is essential, and the words themselves appear with an illusory ease and simplicity. There is startling verisimilitude in the likes of ‘Nineteen’, which begins:

Lisa pegged the goon sack to the Hills Hoist and let it fly. It was just on dusk and the smell of charred onions hung in the air. Her friends, or maybe they were just her housemate’s friends, held sweaty stubbies or plastic cups. Her stomach groaned (she’d avoided the bread) and the goon of fortune came to a stop at her forehead. There were woops and cheers as she pulled the bladder to her lips and sucked.

As the opening passage indicates, bodies, mouths, and hunger are central to this story. Events are crystalline and murky by turns, surfacing and fading between smoke machine mist and night air; the awkwardness of a nightclub dalliance and service station fluorescents. Of the former, we read:

and then “Billie Jean” came on so they danced until his hands went everywhere. His mouth was too big for hers. She knew this dance could go further but sex wasn’t at the front of her mind, meat was. A meat pie, specifically.

The ache of appetite is paired with other, less tangible pains. There is insecurity and jealousy, evoked by way of contemplation of the calories in a Smirnoff pre-mix. Meyer writes: ‘[t]hen Lisa thought about the thought and felt the smallness of her world like a bruising pressure on her skin’.

The material smallness of this book and its fictions is deceptive. These tiny stories have a pressing, bruising quality of their own, and attest to the possibilities of language – whatever the form – as a space of potentiality able to capture and create the world anew.