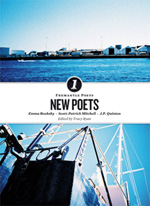 There is an apt awkwardness and uncertainty in all three poets – Emma Rooksby, Scott-Patrick Mitchell, J.P. Quinton – here: in the expression of sentiment (‘Preparations’, Rooksby), in the use of syntax (Mitchell) and archaisms like ‘verily’ (Quinton). All three are skilled poets, but they are new, and there is a sense that they are still trying things out. As editor Tracy Ryan writes, the three are ‘extremely diverse in tone and approach’ and this diversity is pronounced in a way that would be tempered were there more poets in the book. Ryan’s selected poets represent three modes, rather than merely variety itself. This is not a sampler, however, but three books in one, and perhaps not designed to be read sequentially.

Emma Rooksby’s poems are concerned with observation and affect: with the ordinary and with everyday feelings. She makes tensions from projected feelings that are contradicted, dredging the remarkable from the mundane, from the weather, or watching birds (magpies and cockatoos recur). The poem ‘Walk’ is interesting. It functions by addressing a we, rather than using a plural narration, and establishes a relationship with the walk, that is the location of the walking, in particular with the trees:

Here photography signifies self-consciousness as much as attention to the environment. The narrator makes an analogy between the establishment of the tree and its new growth with the apparently two-year-old relationship. It is a walking dialectic, where ‘we’ tread on familiar and then new ground. There’s a move that feels characteristic here of complacency that’s acknowledged and critiqued. It is clearly a productive strategy for Rooksby, yet the risk is that the knowingness overshadows perception. The adjective ‘faithful’ applied to hills feels weak, and the irony of the ‘fresh, unlearned variation’ (which does seem fresh) leading to the conclusion of being ‘somehow surprised’ can’t save what feels like a tonal failing of the poem’s last line: ‘and the well-known westward view’.

I prefer the more abrupt ending of the following poem ‘Reading’ (‘she’ll bathe him if he doesn’t bathe himself’): another poem that layers commentary with narration. The poem relates a visit between someone and their father who reads aloud from Tennyson’s ‘Maud’. It is both serious and humorous, risking a literally settling moment in the middle – ‘‘He’s still the same,’ I think, and settle down’ – but managing to keep the poem light and engaging.

The ending of a novel or film can be crucial in determining the work’s overall effect. Plot resolution is generally less of an issue in a poem, yet tonal resolution is important. A poem (and a book of poems) must retain a sense of energy for us, not have the energy emptied out by the poem’s performance. The poem ‘Home’, apparently shifting the perspective of the previous poem ‘Reading’ to that of the father, has some nice phrasing (‘populace of blokes’; ‘waterlogged fruits’) and original observations (‘I see too coarse a grain when I try to read’), yet the bathos of the final lines ‘Back in my room the books have fallen silent / I have forgotten to say goodbye’, don’t quite have the necessary traction. It’s a problem that recurs (in ‘Early afternoon’, ‘South from Belconnen’ and ‘Preparations’): there is a tonal shift where the poem seems to drain out. Phrasing and observation aren’t enough; a predictable ending can make a whole poem seem predictable. An awkward ending makes a poem seem ill-measured. Perhaps the poems are effects of Rooksby’s section title Time Will Tell, a phrase which though expressing an unknown, suggests that given time, things will turn out as the speaker expects. Yet there are exceptions: ‘Memory’ suddenly builds with its final line: ‘How magnificent the sunsets are these days’.

The tension between the expected and the unexpected pays off in ‘Appearances’, where intimacy and moonlit reality combine in creating domestic intrigue. There are suggestions that the narrator regards themselves as much as the you they seek though: noticing their own moonlight stripes, describing their own ‘prowling” as ‘soft’. As ever in Rooksby’s poems there are examples of adept phrasing: ‘eyelids to’; and in ‘Bird and beast’, ‘a hawk haunts the higher air/deciphering the woodland/into irrelevant and food’.

Like Jesus with wine, Rooksby saves her best poems till last: a promising indication if the book’s structure is at all chronological. In the final nine poems there is lightness, new formal gestures – including the conceptual – and a deft handling of sentiment, tone and closure.

Scott-Patrick Mitchell’s section {where n equals} a determinacy of poetry also concludes with one of his best poems, ‘Eight Letters To A Lover, II’, which achieves a contemporary reading of the cosmos as domestic. The poem narrates a gift to a lover, and concludes: ‘I have written / a myth for you / – made the stars / looser / to navigate through/.’ The poem itself is designed as a constellation and final flourish to the book.

The book begins with a section titled ‘_ature’, which neatly draws a truncated correspondence between literature and nature. The literary at least is in full flush.

The first poem ‘from the margin’ addresses a world that would silence this narration, but we are not told why or how, or what margin is exactly. It is a negative version of Walt Whitman: ‘for I will have voice / in everything/.” The poem introduces a series of five haiku named for flowers that we might think of as English: the rose, the forget-me-not, the sunflower, the hyacinth, the iris. (The rose, for example, is primarily an Asian plant, though colonised by English poetry). I like the poems more for what they do than are, for their assertion of subject matter. They introduce one of the elements in Mitchell’s poetic cosmology that, as we’ve seen, also includes stars and love. Flowers are not just something Mitchell likes, or has happened to notice, but are thematically dynamic and structuring, and seem to claim poetics rather than express anything about flowers per se (they appear, rather, to be about love and eros).

I prefer the poem that they lead into (noting that Mitchell has a strong sense of order),‘pillow book.’:

This particular pillow book appears to be written by a composer rather than a storyteller. Part 4 consists entirely of: ‘tree as clef /, month as score;” and ‘11’: ‘the notes / in-between echo / while/ ten thousand words /pillow/.’

Here the more flexible form gives Mitchell just the right amount of restraint to the urgency and richness of sensibility – at times like a hyped Javant Biarujia – that is continually being intimated. There is a trace of haiku in this sequence also, but the less faithful adherence allows Mitchell to demonstrate what he’s taking from it and where he’s taking it. As the book continues we get birds, (computer) games and (hiphop) music culture: the latter two intimations that we are in for more than Japanese-inflected, Romantic contrivance.

There is – perhaps surprisingly given the garden flower haiku with which the book begins – a sense of identification with the natural world that is visceral rather than rational, and that makes the sound of language (puns included) a metaphor for the earth’s energy and proliferation.