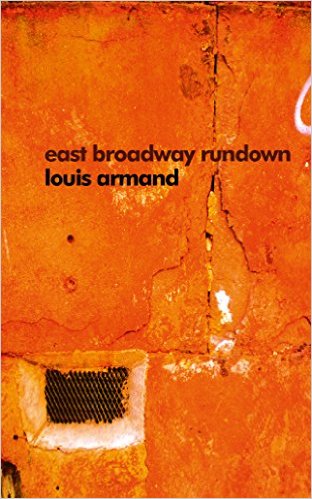 Louis Armand’s poetry is unbending in its loyalty to the aesthetic and moral responsibilities of the avant-garde. In these new chapbooks, both published by Vlak Records, Armand mines culture for its buried messages, showing how fraught with uncertain track is any search for truth and authenticity in a world made knowable by language.

With East Broadway Rundown, a poetic and photographic homage to jazz saxophonist Sonny Rollins’ album of the same name, Armand examines the presence of the written word as it appears on a particular street in Chinatown, New York. The collection opens with a description of the project’s beginnings, Armand explaining how Sonny Rollins’ sabbatical in 1959 would eventually lead to his 1966 album East Broadway Run Down: ‘the piece of music that was going to explain it all to him.’ Armand then narrates his own mimetic pilgrimage across ‘Houston, Delancy, Grand, East Broadway to Canal … Retracing the steps of Sonny Rollins.’

It struck me about halfway through East Broadway Rundown that Armand’s photographs were interrupting my spontaneous expectation that the poems would possess a feeling of completeness. As in the novels of W.G. Sebald, the function of the images in the book – whether intended or not – is to break the reader’s attention away from the author’s text. In this way and others, Armand’s poetry embodies the paradoxical mistrust of art that is at the nucleus of the avant-garde. He never permits the poem to become complacent with the truth of any particular image; each line seems vulnerable to modification and contradiction.

For example, in ‘Start Again in the Middle of Things,’ the longest and most structurally complicated poem in the book, the lines gradually jumble into each other, gelling together into a kind of illegible soup in the middle, then separating again into neatly ordered paragraphs on the final page. The poem opens in contest with itself, questioning the authority of its author: ‘How d’you know / when the job’s done? / What’s a right / step, what isn’t?’ (There are, of course, no page numbers in East Broadway Rundown or The Rube Goldberg Variations: page numbers might give the reader the impression that they were climbing toward something, whereas Armand clearly prefers to drop the reader, as the title of the poem suggests, in the middle of things.) The poem proceeds to inspect the problem of endings, asserting there is ‘No comfort in dead-ends’ and that ‘The escape route’s still part of the labyrinth.’ Armand seems to postulate that the aesthetic ideal of ending is itself clichéd and contrary to the inherent strategy of the avant-garde; that the only way of ending a work of art is to ‘Pick a cliché, any cliché’, an idea that recalls the famous non-ending of James Joyce’s Finnegans Wake, of which Armand is an accomplished scholar. The last poem in East Broadway Rundown, ‘Throw Down,’ ironically echoes this thought, closing the collection with a laconic and familiar platitude: ‘finish what you started.’

Armand’s ear for the comedy of cliché is further pronounced in The Rube Goldberg Variations, where the conventional phrase (which is inherently linked to the conventional thought) is reimagined through Armand’s surreal imagery and appetite for wordplay. This effort is not merely academic; Armand’s poetry engages with cultural, political, and social concerns in the subversive way only truly avant-garde art can. What Michael Aiken, in his review of malice in underland (Textbase, 2003), calls Armand’s ‘penchant for relatively silly puns,’ is also a kind of rejection of literary fashion and aesthetic standards. And as Ryan Scott writes in his review of Letters from Ausland (Vagabond Press, 2011), Armand ‘gives thought its heft, urgency and gravity and thus separates himself from being a mere poet of ideas.’ In ‘The Law on 42nd Street: “A CA$HMA$ CAROL,”’ for example, Armand develops a seditious criticism of American capitalism and consumer culture centred around the excesses of Christmastime:

Part of the pleasure and pain in Armand’s poetry is its intertextuality; the pages of his books are flooded with references diverse and obscure, yet the poems also engage with figures of mainstream culture. Louis Armand is a poet for whom everything seems urgent – whether it be modernist architect Adolf Loos or classical pianist Glenn Gould; Walt Disney or Darth Vader or Henry Kissinger – all are relevant to Armand’s vivisection of global culture. But like any art that revels in its ability to call forth others, at a certain point reading Armand’s poetry can become a little like doing homework. Of course the trick with intertextuality is to give the reader adequate incentive to do their homework, which Armand does successfully most of the time.

It is true that the difficulty of these chapbooks, their tendency toward obscurantism, will alienate and confound readers hoping for a pretty bit of verse before bed; and true also is the sense that some of these poems miss their mark while others seem incomplete or in need of harsh edits. But the attentive reader – who takes their reading slow and their rereading even slower – will be rewarded with poetry that is intellectually rich, spontaneously funny, and always subversive. Though sometimes rough around the edges, with East Broadway Rundown and The Rube Goldberg Variations Louis Armand again earns his place as one of the spearheads of the Australian avant-garde.

This entry was posted in BOOK REVIEWS and tagged Louis Armand, Nick Xuereb. Bookmark the permalink.
Nicholas Xuereb is a writer and critic based in Melbourne. In 2016 he is completing a combined Honours degree in Creative Writing and English and Theatre Studies at the University of Melbourne. He is writing his thesis on the work of American author Don DeLillo.