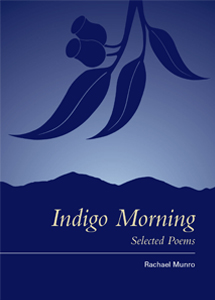 Rachael Munro is a keen observer who writes in a language of nettles and nets, establishing a daily mood via the accumulation of certain details. This is a book of apricot tissue petals and fences-turned-crystal lattices; of the world in its weather and a poet caught in the tangle.

Many of the poems reflect early years in the poet’s life growing up in the Snowys (mountains of NSW), and her acute impressions, ‘air tasting sharp as splintered ice in the brittle sun’, will ring true for anyone familiar with the Monaro region, even though, as the speaker in ‘Exile from Paradise’ remarks in the poem’s opening lines:

Across five numbered sections, the reader of this slim volume herself passes through; visiting upon snapshots of the poet’s family growing up, meditations on nature and animals – horses and cats especially abound – and suburban life. Occasionally a poem disrupts the book’s overall tone, such as the diaristic prose poem ‘Profiteroles’, which undoes the work of the poet’s otherwise restrained and elegiac compositions.

Poems such as ‘Lipstick’, where the speaker looks in the mirror and sees her mother’s dying face, are moving. ‘Rasberry glacé, Mum’ she says. Indeed, strongest are the moments where the poet bares her teeth. In ‘Sunday Morning in Sydney’, the speaker watches a couple flirting in a Kings Cross café. ‘Yet I am the shark, I want to feed on them both,’ she says, in a surprising turn. The ‘voyeur-spiced dream’ revealed.

Equally surprising is the recurring red mare who dapples poems such as ‘Sun-fish’, ‘Red’, and ‘What I Have’, equal parts beast and motif. In ‘Red’, the mare reminds the speaker of

and in ‘What I Have’, a sense of loss is further punctuated:

There is a current of desire running through this collection and it sparks at unexpected moments and with force. Peppered throughout are references to the poet’s struggle with addiction: one of the first poems, the unhappy ‘My Father’ concludes with the speaker

while the poem ‘Christmas Tree’, in the book’s concluding pages, describes the speaker pouring vodka into the bucket at the base of the tree, ending on a weak gag

that nonetheless provides a welcome insight into the person of Rachael Munro, enriching readings of otherwise straightforward descriptive verses such as ‘Snake’ and ‘The Cigarette Lighter and Chaos Theory’, both of which hinge on notions of control and balance.

From ‘The Cigarette Lighter and Chaos Theory’:

A minor complaint is that the poet sometimes lingers too long. Poems like ‘Exile from Paradise’ and ‘A Butcher Shop’ land with greater impact without their final summations. There are also occasions of vague syntax which serve to confuse in moments that are better clarified. In the final paragraph of ‘Night Creature’, where the ‘it’ is a moth straining towards lamplight:

The poems in Indigo Morning revel in a sensual architecture and underscore how memories amplify the colour, texture and shape of our experiences. This selected poems, an all-too-modest snapshot, I suspect, of a well-lived life, settle upon the reader with a sense of humbling finitude: above the trees / but still below the sky.

This entry was posted in BOOK REVIEWS and tagged Emily Stewart. Bookmark the permalink.
Emily Stewart lives and works on Wangal land. She is the author of Knocks (Vagabond Press, 2016) and her forthcoming collection, Running Time, received the 2021 Helen Anne Bell Award for an unpublished manuscript. Emily was formerly the poetry editor at Giramondo Publishing and she is currently completing a creative doctorate at the Writing and Society Research Centre.