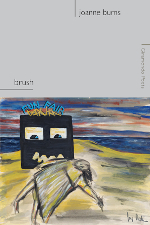 Brush, the latest collection of poetry from Joanne Burns consists of layers juxtaposed in a profuse and generous abundance, styles not fused so much as flipped over and filed into an album as much as an anthology. What may appear to be random sections and selections on closer inspection consist of a gathering that implies a duty of care, assembling shared cultural and oneiric artefacts stripped of extraneous affects and putting on record that which is weird and wonderful and way out there.

The journey through a cracked contemporary landscape begins with ‘bluff’, the corporate sector satirised as hale and homespun in its clichés, instant exotica and misuses of mythology and forgotten cultures (‘the bulls are roaring’) and where ‘rock bottom really was a long/way down something dreamed up/by cranky old dante’, and which underlies a society spinning out of control, its convulsions captured in concise centripetal strips and strands. The titular ‘bluff’ is followed by ‘chain’ to end the surreal sequence as ‘buñuel/ budgets for the guest list’ with the almost attainable promise of ‘a yacht in a sunset/clause’, reminding the reader that this insomniac landscape is marginal but far from unreal.

From high capitalism to the everyday mundane, urban life in Burns’s world consists of health foods that need definition, lengthening queues and disappearing public phones. Lost in the supermarket? ‘i’ll take a long/black with nietzsche the germans/always give good head’ The wit is dry and sharp as schnapps. Throughout the volume, significant names and places crop up, some familiar, others less, no proper nouns capitalised – a common enough aspect of free verse, yet noticeable in examples such as that above. Still, if, as William Carlos Williams had it, there are ‘no ideas but in things’, then Burns appears to have arranged her ‘self-things’ in their organic orders, without favouring those overtly animate over other objects.

The section ‘in the mood’ continues the offbeat odyssey, involving a peregrination through the senses: in ‘wink’ there is an acute eye for the miniscule, implicit in sight, and the hypothesis that ‘all/those heritage listed visionaries and mystics simply were victims of retinal mistranslation’, which could be put right these days, when hair, skin and eyes have their own disconnected lives in mental assemblies such as the titular poem of this section which looks at various miniatures, colliding and colluding as part of a ‘mood in progress’.

Although the poem that begins the ‘road’ sections claims ‘I have nothing exciting to tell’, the cavalcade of names and other suspects continues, leaving ‘the wagon to/serenade its own wheels’ and the sojourner sated once again from another section strewn with strange sights: aptly enough ‘bukowski/is in town’. The poem ‘cheap’, which claims: ‘I am easy to sing//could I moonlight as a sub committee/it’s all vaudeville’ summons shades of Frank O’Hara, not that burns is without her own responses to emergency – her meditations form their own off–kilter collages, and instead of pleading for endless love, she hangs fingertip tensile onto her own gonzo craft for the ride. The road loops, or ‘it grows on you’ as the present turns again to ‘medieval greyhounds’ and ‘the rows of trams burned/brighter than ilium or carthage’. Trams, embodying an elegant yet redundant mode of public transport, have the poet’s sympathy: relegated into their rows and ready to be set alight: metaphors also have their fate.

In ‘a later page’ she almost corners Elizabeth Bishop in a dentist’s waiting room, where her veins are ‘warm with scents of post-appointment pleasure’, and the magazines summoned to shut out the trauma are not quite enough to keep the earlier mood progressing. A palpable sense of hurt pokes through, a rawness evident through the fillings of carefully tended lines.

The central sequence, ‘brush’ sets a liminal scene of some power, where with ‘the intonations of the charcoal/ocean from sand to horizon, we sip/on coffee’s prophecies’. A day begins in Sydney, local yet transoceanic, achingly contemporary and anxious of its own mythology. This continues with ‘comb’, an homage to beach and suburb: ‘bondi was always as big as/tomorrow, or something wider/more thrilling than time’, a placing of personal history amidst the ludic and ironic dissections of contemporary myth making and cultural reshaping. Once again, not all is innocent word play: to make charcoal, something is burning, if not on the immediate horizon. Pinochet’s torture ship arrives in the harbour, and the Chilean dictator’s vessel has yet to erase traces of blood from its tracks. The poet counters with the presence of Pablo Neruda in her own realms and passages, where earthly reams of dusty pages and ‘assassinated tomatoes’ constitute a form of transformation, in response to the times that take too many prisoners.

Towards the end of this remarkable and eye-opening collection, and before the final ‘great sleep forward’ with its oneiric release from chronology and its open book-ending of the volume, comes ‘harbinger’, a poem where the local and transnational come together again, ‘multiplying the view an/extended prologue/to an opaque parable’. This last line seems disingenuous: burns elucidates more than she obscures, and with subtlety and skill reprises her spare yet concentrated appraisal of the polis, its legends and strands of the indigenous, inter-generational, confessional, and archaic presences that wash up upon its shores and into her net of words.

This entry was posted in BOOK REVIEWS and tagged joanne burns, Nathanael Pree. Bookmark the permalink.
Nathanael Pree is of Australian and German background, brought up and educated in the United Kingdom. He did undergraduate studies at University College London, before working in education in Russia, Vietnam, Cambodia and Australia, with additional work experience in India. His postgraduate studies were at The University of Sydney, specialising in the works of W.G Sebald (Masters’ Dissertation) and Charles Olson (PhD, ongoing).