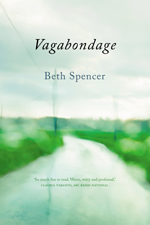 A wilderness of small things (mattering)

The book, a first person narrative of a year in a van 2009-2010, is structured as a travelogue/road movie/quest in that it follows the author’s progress through country towns – yet underlying that progress is an emotional journey that examines the past and imagines a new future.

Spencer defines the term ‘vagabondage’ as being stateless, in servitude to nomadism, and/or being bound for somewhere. The journey and the book gives Spencer the space (and time) to consider important issues: What it is to be Australian, our relationship to possessions and possession, and to solitude and loneliness.
The book opens with a major act of deliberate dispossession, the sale of the author’s beloved house.

This, usually an Australian’s major lifetime purchase, shows how big a personal step is involved. The coming road-trip is no literary conceit but a major practical and philosophical challenge. The poem immediately following it drives straight back to childhood to memories of Whelan the Wrecker, a family-owned and operated Australian demolition company, and its magic ability to disappear houses. This loss of a home is echoed later in the book when the magic trick is repeated not as homes pass into different ownership, but the more terrifying total loss of a home in a bushfire:

There follows a series of questions that form the first line of the next stanzas: ‘Did they have to climb out the window… Did the run down the back steps… Did someone remember to let the galah/ and the cockatoo out of the cage… Did someone let the dogs off the chains…’(‘Snap (Saturday, 7 February 2009)’ p 80-81) that emphasise the uncertainty and the fear.

Dispossession/possession is not just of objects, there is an unsaid echo in the poem ‘Loving stuff (watching Hoarders, p14)’ of the dependability of things (in comparison to human relationships) that ‘… don’t /suddenly announce one day/they are leaving.’ Getting in that van is no unsophisticated look at possession/dispossession, but as conscious a step as a Buddhist path of non-attachment:

Of course, this book itself makes leaving no trace impossible. And, again, how dependable are things anyway?

All of these quotes remember a party that Spencer was guest of honour at and provide the luxury of being an onlooker on her own life; lying in state and dressed in black as the dead, then rising at midnight to dress in white and dance until dawn. The refrain from the poem ‘I rise… I rise’ or ‘(rising, rising)’ is repeated later in the book in modified form as ‘Rising and sinking’ (‘The Shipwreck Coast’ p.69) and ‘sinking, rising and falling’ (Reasons to leave p.95) in both cases the psyche is a site of drowning.

Vagabondage may seem serious (yes) and sad (in parts), but there is a humour that underlies the journey that turns its reading into an adventure. There are irreverent poems such as the stylish and jaunty ‘Advance to Erina Fair’, a misappropriation of Dorothea Mackellar’s ‘My Country’ and Peter Dodds McCormick’s ‘Advance Australia Fair’, whose subject is the use by itinerants of public facilities, a theme revisited in ‘Facilities’. The photographs, too, tell a tale whether it is the ‘Three kangaroos’ that may be an Australia that refuses to see, hear or speak to evil; or the sequential author photographs of her batting away flies.

‘Advice for van-dwelling’, a found poem on the global financial crisis, and ‘Foraging’ both show the distance a ‘plastic-wrapped’ existence keeps us from experiencing the reality of hand to mouth living. A photograph of super foods presented on a plate by a muscular super hero doll made from plastic shows us the humour in that. The quirky photos are a great addition to the text: I am thinking of ‘taking snaps/ with two rubbery/ water-filled breasts/ from the two-dollar/ shop at the Cross’ (‘What’s under the bed? ’ Bras and breasts poem’ p.45) with the nipples upright, balanced on either hand.
The poems in the section entitled Memory are about the dismantling of a life, the loss that begins long before a death with a visit to her mother in an aged care facility, the history of roads and the anonymity of those who made them (and those who use them). There is also a dispossession and loss we rarely acknowledge:

Spencer ends the collection with ‘Lost Woman Looks for Herself (found poem)’ – a woman unaware she was lost and unrecognised by her travelling companions – arriving at her new physical and mental home. This book doesn’t belabour its wisdom, but instead opens us up through humour to all aspects of humans’being.

This entry was posted in BOOK REVIEWS and tagged Angela Gardner, Beth Spencer. Bookmark the permalink.
Angela Gardner's verse novel The Sorry Tale of the Mignonette published by Shearsman Books, is a UK National Poetry Day recommendation for 2021. Poems from it have been anthologised in The Forward Prize 2022 and Live Canon International Poetry Prize 2019. Recent poems have been published in The Yale Review and West Branch, USA; Blackbox Manifold and The Long Poem, UK; Plumwood Mountain and Southerly, Australia. She lives in Ireland.