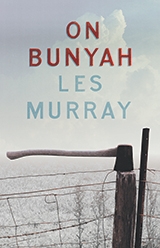 The doggedly metropolitan Frank O’Hara wrote in ‘Meditations in an Emergency’: ‘I can’t even enjoy a blade of grass unless I know there’s a subway handy, or a record store or some other sign that people do not totally regret life.’

In the introduction to On Bunyah, a career-spanning collection of poems about his home township 300 clicks north of Sydney, the stubbornly pastoral Les Murray writes, ‘this book concentrates on the smallest habitats of community, the scattered village and the lone house, where space makes the isolated dwelling into an illusory distant city ruled by its family and their laws.’

Australia is a suburban nation haunted by rural myth. Phones, and now the internet, are erasing the country /city divide, slower than some might think, but inexorably all the same. Murray is old enough to remember a time when a few visits to Sydney made a man ‘flash’ and to go to university was as outlandish an idea as learning Chinese, both things Murray sort of did (‘Watch out if this does well at school / and has to leave and longs to leave.’) The old bush and it’s illusory cities can alienate just as totally as the modern concrete city. Yet we keep looking to the bush for answers to the cultural conundrum of Australia.

Murray’s direct ancestors were the first white settlers of Bunyah. They were loggers and dairy farmers. On Bunyah evokes a time when even townies were that bit closer to the means of production. Times have changed and though it might seem odd, the Bunyah of 2015 has less human incursion than the Bunyah of 1915. As Michael Farrell writes in his ‘Settlers, Regurgitated, a poem that reads as a gently ironic pastiche of Murray, ‘our most senior writers were born / out of this malaise … we had a septic tank once/but who has them or wants to hear about/them now when society is so shit-free?’

As I sat on my deck in an isolated part of Gippsland, reading On Bunyah, a bird shat on the book. As cosmic commentary, it seemed to come straight out of the book. It is the kind of thing cutely ironic poems are spun from, and Murray is at his worst when he is cutest. ‘If the good were not weaker / how would we know to choose it?’

Les Murray has created Bunyah as much as Bunyah has created Les Murray. There are thousands of Bunyahs in Australia that could be totemic places, for lack of their Les Murrays. But despite the focus on a single locus, On Bunyah feels scatter-brained. The overall effect is not much different from reading Murray’s selected poems. All of his books have been about Bunyah, in one way or another and, despite the thirty or so vintage and new photographs interspersed through the book, many taken by Murray himself, this particular collection doesn’t seem to present the material in any new or interesting way.

As Murray nears the end of his career, On Bunyah is probably the summa of his poetic grappling with his home district. Present are syllabus favourites like ‘The Tin Wash Dish’, ‘The Broad Bean Sermon’ and ‘The Cows on Killing Day’, only clarifying that Murray’s more recent poems are mere sketches compared to these bold classics. It’s like he’s saying; you know what to do now, fill in the colour yourself.

There are poems for which the labels bucolic and pastoral are inadequate. In ‘December: Infant Among Cattle’ nature and the built environment merge, ‘where the soil is itself a concrete, of dust, and seedy stones / and manure crustings.’ The lines between nature, God’s creation, and cities, mankind’s creation, have always been blurred by Murray. In ‘The Forest Hit by Modern Use’, Murray writes, ‘the forest, hit by modern use / stands graced with damage.’ For a poet who dedicates all of his book to the glory of God, ‘graced’ is a charged word choice. Our modern use of grace – charm, manners – contrasts with his pious use of grace, unmerited absolution from God.

Most of the tall trees around Bunyah were logged long ago. This has changed the ecosystem. ‘Dense growths that were always underbrush/expand in the light.’ Murray is a poet of the way of nature, in which destruction always brings something new into the light. Acutely aware of the destruction of colonial times, which in some respects remains ongoing, Murray nevertheless does not disown the past. His is poetry of redemption. For him, being a Christian means ‘You’ve resigned from judging.’ He is continually ‘graced by damage.’

To be an avowedly Christian artist in Australia is to be a bit odd. As Murray says of the hand-milking of cows: ‘sparetime childhoods force-fed this / make solid cheese, but often strangely veined.’ Alan Jacobs, the American Christian writer, recently called Murray Australia’s ‘consecrated heretic’, our Voltaire or Sartre, celebrated for swimming against the current of an otherwise barkingly hostile cultural elite. The long 1970s have thankfully receded in recent years, and Murray has come to be appreciated for what he is, with all his rage and posturing, perhaps the best phrase-maker we’ve ever had.

As an admirer of Murray’s prose I was hoping for more from the scant, two-page introduction. Murray’s essay, ‘A Working Forest,’ published in his 1997 book of essays of the same name, is the place to look for authorial comment. But the poems of On Bunyah don’t really need them.

At a time when we are more and more anxious about what ‘home’ means and less and less sure where home is, Murray, cloistered in Bunyah, reminds us of the riches that emerge from a lifelong inhabitancy of a single place. To borrow a vulgar catchphrase from the world of finance, it’s not timing the market, it’s time in the market. That’s why the travel brochure is as good (bad) as the package tour itself and readers of Australian poetry will be on Bunyah’s illusory distant city for a long while, even if its riches can never belong to them.

This entry was posted in BOOK REVIEWS and tagged les murray, Lucas Smith. Bookmark the permalink.
Lucas Smith a PhD student at at Monash University, writing on the life and work of Barbara Baynton. His poetry has appeared in Australian Poetry Journal, Meanjin, Southerly, The Rialto and many other venues.