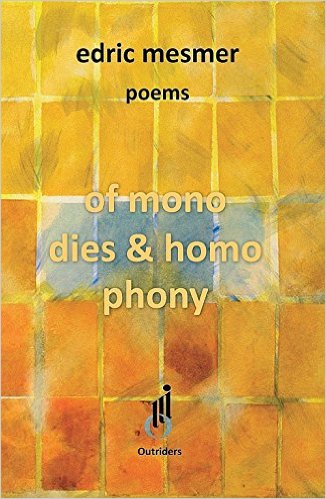 Of Monodies and Homophony by Edric Mesmer
Outriders Poetry Project, 2015

The arrangement of the title on the front of Edric Mesmer’s Of Monodies and Homophony gives the reader an early opportunity to judge (or, at least, predict) the develop-ment of the text:

Mesmer takes two words that essentially indicate a single, dominant – or closely related – voice or sound, and breaks them down into their constituents. At the very level of the word itself this undoes any such notion of an isolated predominant melody. ‘Monodies’ is shattered to be ‘mono / dies,’ suggesting the elimination – death – of ‘mono’ as a combining form that denotes ‘alone’ or ‘single’ – and that words can always be opened up, even materially. While ‘homophony’ becomes ‘homo / phony’. ‘Homo’, of course, is a heavily laden word, indicating both the genus of bipedal primates (including humans) and, in slang, a derogatory term referring to homosexuals. Indeed, throughout the book there is a kind of sexually charged undercurrent: ‘Doppelgangers are kis- / sing in this Ganges’ (‘Largesse’). Additionally, like ‘mono’, in its combining form ‘homo’ suggests ‘sameness.’ To then follow with ‘phony’ is to, in a sense, falsify these meanings; or, at least, it challenges them. The book’s title, then, enacts through its very own constitutive parts a cancellation of its apparent meaning: a book seemingly intent on exploring a single, strong voice, becomes a book intent on thwarting (in-deed lamenting) any such singularity.

Accordingly, Of Monodies and Homophony is deeply concerned with language as a kind of conceptual object in need of exploration and perhaps re-formation: ‘—I want this cyclical hovel / to be my foam, form, nonce, and novel’ (‘Intaking Water’). It delves into lay-ers of meaning inherent within the very fabric of the word itself: the phonetic, denotative, connotative, social, cultural, perhaps political factors – and on and on – that create, and im-pinge upon, the act of understanding and communication. True to this insistent need to frac-ture language and to test meaning, Of Monodies and Homophony is a book rid-dled by interruption: ‘as / islet / is-let // I let go as sloe floes & // I AM CON-TINENT’ (‘Dorsality’). This occurs literally in its broken language, where a word’s comple-tion is often scattered over two lines, thus delaying visual and aural recognition – confusing what the word is indicating, sometimes releasing its antonymic relation:

In Mesmer’s work the ostensible security of a word’s significance can also be undone, as words that share a homophonic likeness are located in close proximity. Even usual associa-tions are undone:

The reader can easily engage the music of Mesmer’s both smooth and purposefully fragment-ed prosody – and the book is initially perhaps best read, or indeed listened to, in terms of its careful sound patterning: ‘sea-sputtered utterer / raiment-draped / no longer’ (‘Dorsality’) –but his intensely dense vocabulary, and recourse to myth, ensure the necessity of keeping a dictionary and Google search perpetually close at hand. This, again, makes the flow of read-ing a jagged affair. Mesmer’s use of archaisms – ‘Olde Logick’ (‘10 Kinds of Quiet’); unusu-al, remade idioms – ‘the carte none / too blanche’ (‘Cant Bello’); Latin; Greek; French; pseu-do-scientific jargon – ‘otology of / his mother’s spate’ (‘Delphine’) covers so much terrain and numerous sources, that the identification of any neologisms is hesitant. Another reader could very easily uncover a history or tradition of meaning absent from my own knowledge (or the surprisingly limited scope of the internet).

Thus, for a book of poetry so intent on examining the structures and variables of language from the inside, Of Monodies and Homophony persistently points without itself, to what almost amounts to a referential stability: a kind of concretisation or familiarisation of the elements it distorts. As the reader searches to understand a word, phrase or invoked my-thology, the poem’s object-language becomes essentially grounded in the world of meaning, even as it ironically closes possible meaning in the act of being ascribed a definition. This is a peculiar inversion of the collage process, which in placing an object derived from external reality within the work of art defamiliarises the usual conventions and associations of that object: essentially, remaking its meaning. But, in Of Monodies and Homophony, strange and unexpected things and words come to be re-established in conventional reality, even as they are frequently broken within it. Their oddity in the text is partially undone, given over to the apparatus the reader uses to make sense of the poem – unobjectified, so to speak.

Regardless, throughout the book there remains a persistent tension between this external un-derstanding – a meaning that becomes insistent as the reader recognises it outside the poem, then inevitably considers its role within the poem in light of this context – and its presence on the page as a linguistic object, that is, a group of compiled letters. In a sense, then, Mesmer is asking the reader to hold in mind both the referential aspects of words/figures and their role as an aspect of the poem’s sonic landscape. The former insists on the reality of the poem (at least, its reality as determined by whatever definition is found); while the latter attempts to illustrate the pliability of any such reality, that the materiality of a word can be conditioned by the poet despite its significance. About halfway through the poem, ‘Of an Age’, Mesmer writes:

Flowing by on the back of the long vowel sounds employed, the quoted passage appears wry-ly self-reflexive. Opening on some notion of ‘Antiquity’ almost drowned – ‘subaqueous’ – the poem appropriately comes back to this sense of the old, finishing by noting how the ar-chaic spelling of ‘choir’ – ‘quire’ – is obviously a ‘homonym’ and ‘synonymous.’ In between, the speaker asks why they ought to use the term ‘chalice when cup suf- / fices’, as the form of the poem, including the words it elects to use, directly asserts itself. ‘Sibilants’ try to counter the dominant assonance, while there is apparent disagreement about the ‘end of the image’ (perhaps its attempt to project a sense of ‘Antiquity’?), and, despite its elegant step-lined free verse, an acknowledgement of its lack of metre: ‘“(the concept of the line is not employed)”’. These challenges to the shape of the poem, begin to point away from its earlier notion ‘of an / age bygone’: it is not a poem lost in its ‘Antiquity’ – although the reader must enter this space to ascertain some of its meaning – but rather a poem lost in the carefully crafted convolutions of its own form, wondering about the need for any ‘bygone’ phrasings. Mesmer’s language deliberately draws from its self-reflexively difficult nature, operating in part outside the text; yet his insistence on fractures and sound – a kind of ‘literatim’ – still brings his words into confrontation with their arbitrariness as signifiers, ‘redolently il- / lumined’. Poeticised as such, they are rendered as object-words that share aural characteristics with other object-words, which is ultimately (and fruitfully explored) at odds with their differing meanings.

The potential problem of this technique emerges in Mesmer’s frequent, direct references to figures of poetry, music, art and philosophy, and even his allusions, like the one to John Cage, who is surely an important figure in the kind of spacing and assumed avant-gardism of the book: ‘“4’33” rhyming / meaning melodious’ (‘A Khimera’). On one hand, this can work in the poet’s favour, as with his superb ‘Due Fault,’ which is an expert imitation, extrapolation, maybe modernisation of the undervalued (and already thoroughly modern poet) Mina Loy:

Indeed, Loy’s presence is suggestive throughout Of Monodies and Homophony: in the tight brevity of Mesmer’s imagery and sound-pattering, and in his lineation, peculiar grammar and vocabulary. As Roger L Conover writes in his introduction to The Lost Lunar Baedeker: Poems of Mina Loy (1996): ‘she was building a Trojan verse –deliberately hijacking Victorian vocabulary and conceptual posturing in order to subvert the values and expose the mechanisms such constructions were meant to euphemize’ (xv). Simi-larly, Mesmer seeks to use the laid-bare mechanics of his explorative techniques to expose the breadth and subjectivities of language – ‘excretions / of the mucused brain re- / arranged in secret patterns’ (‘Due Fault’) – thus ‘subverting’ any sense of monody or homophony:

As a presiding and named influence, and perhaps source of Mesmer’s frequent turn to a largely unfamiliar language and myth, Loy’s presence grounds the book in a modernist milieu that returns to the roots of language to ‘make it new.’

Pages: 1 2
This entry was posted in BOOK REVIEWS and tagged David Dick, Edric Mesmer. Bookmark the permalink.
David Dick is a Melbourne based writer, critic and poet. He has been published in Cordite Poetry Review and otoliths.