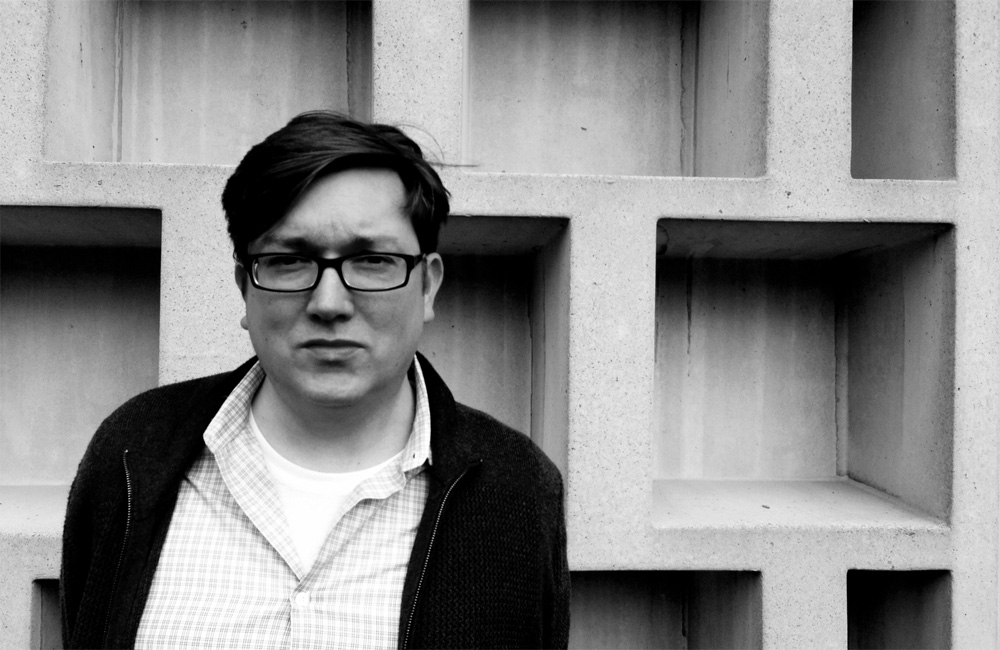 Edric Mesmer’s of monodies & homophony won the 2014 Outriders Selection, selected by Jerry McGuire, and was published in 2015 by the Outriders Poetry Project. The following interview took place over email and across neighbouring counties during the summer and fall of that year.

Jared Schickling: I am wondering, at this early stage, what materials or ideas you were developing to write of monodies & homophony? There is an erudition about these poems that, I think, speaks to your work as an archivist. Its encyclopedic lexicon and concrete sound-play suggest a Language inheritance, but there is also a deep and constant attention cast toward physical nature, particularly water, which seeps in everywhere. As the sensations of this non-human world arrive at the reader refracted through the prism of your language formations, the visual glimpses or traces that remain seem stereoscopic, especially across pages. There is a third element tying the room together, mythopoesis, which also litters your work.

Edric Mesmer: of monodies & homophony is very much a ‘so far’ book, collecting what I’d been at work on that didn’t seem it should be thrown away at that time (though already I’d make different choices). Imagery of water comes by way of memory, as well as by readerly acquisition. Like many who grew up in coastal areas (for me, Lake Erie, the Niagara River, the Erie Canal), water imagery feels immediate. Then there is – pointed out to me by a friend – the Homeric, handed down by way of modernism. (Reading H.D. early on helped inform this.) Let’s see what else I can say, being unused to talking about my own writing.

I don’t work as an archivist but as a cataloger for a poetry archive, so collecting and description become concerns: What gets remembered? How and by what framework is what’s saved made discoverable? And how do we possibly account for – ingest, digest, condense – the multifarious cadences currently emitting? I don’t think that is an answer to anything more than what keeps me writing.

Questions like the above are also inflected by gender, and I think this fits, stereoscopically, with myth. Mythopoesis is a means by which we get at archetypes, by which we play with shared and competing notions. It interests me even more now it’s become ruinous – myth itself is fragmentary as far as currency. I don’t know if you find this in teaching, but while I was adjuncting I was very often explaining any mythic allusion that cropped up, which seemed interestingly circular. It’s no longer a given vocab or set of symbols; not even the Freudian.

I guess I would ultimately like to think of these poems as sonar, a means to outline the shape of matters otherwise hard to get at; and that may speak to what you say of a stereoscopic quality too: how only the outline, shape, volume of our deepest submergences may be known to us. Datum is cumulative from intake to intake, sample to sample. It seems to me watery imagery is one potential vocabulary for new ways of knowing – of saying – to continuously seep in while reworking a given set of images, an idea, a moment.

JS: Can you say more about myth becoming ‘ruinous?’ I get its lack of currency, that it no longer taps a ‘given’ worldview or language (especially in the undergraduate classroom). But why ruinous? I am curious as it bears on another question I want to ask, about possible symbols and significations in your book.

EM: During work this week, on break from cataloging, I walked down to sit near LaSalle, the manmade drainage lake that keeps the university less marsh-like; there are your ruins, in Hellenic columns! – talk about appropriation: The building once serving as downtown Buffalo’s Federal Reserve Bank at Main and Swan Streets had been constructed to resemble an ancient Greek temple. After the bank building was demolished, the pillars were transported to the university, where they were reconfigured into an amphitheater. They continue to allude to cultural capital (an inadvertent pun) while serving a new if fragmentary purpose, as ruins.

Myths may work like metaphor; Tzvetan Todorov puts it that ‘mythology is at once general and particular, it is and it signifies’ (quoted in See; italics in original).1 In this fashion, it has what I think of as a cultural materiality, a symbolic value in conjunction with its metaphorical function – and the mytho-metaphor is able to function even if only partially. The reader encountering a poem like ‘Cascadence’ doesn’t have to know the references for the poem to work, but certainly the knowing of these enhances the pleasure of the poem. By that I mean: any shared set of signs acting as a parameter thrown open to designate a space for reference to be at play. For example, people who don’t speak the same language certainly share in humor together in other (nonlinguistic) ways, but it isn’t perhaps as frequent or as nuanced as those within the same language, where a different kind of referencing takes place. One’s not better than the other; I am merely offering mythopoesis as one such parameter. (As is ‘the canon,’ as are episodes of Seinfeld, and so on.) Even as each parametric space opens, one may desire to exceed that limit.

Why I came to use myth is probably more related to my reading, likely fostered by the interests of those teachers who taught me Greek mythology. I have come to see this ruinous mythic referent as another tool (vocabulary; lexicon; parameter) by which to communicate. Thoughts, feelings, complexes can be reached through the use of mythopoesis as it can through pathos, also through politics or landscape; in most cases of an image-complex, these possibilities are overlapping and intersecting.2 And perhaps it is leaving us…’As we leave now the shore of the textual’ (‘After Monica Angle’s Division of Water’).

(A visit to the MoMA a few winters back offers another answer: my friend Judy and I were looking at modernist collages, full of aging newsprint; I said how odd it seemed to look at these and think of the newspaper as something we are drifting away from. Judy said: this might also signify the moment when newsprint becomes interesting again … and so with myth.)

Pages: 1 2 3
This entry was posted in INTERVIEWS and tagged Edric Mesmer, Jared Schickling, Tzvetan Todorov. Bookmark the permalink.
Jared Schickling is the author recently of the BlazeVOX books Two Books on the Gas: Above the Shale and Achieved by Kissing (2014) and ATBOALGFPOPASASBIFL (2013), as well as The Paranoid Reader: Essays, 2006-2012 (Furniture Press, 2014) and the chapbook Prospectus for a Stage (LRL Textile Series, 2013). He co-runs Delete Press and lives in Western New York.