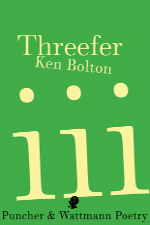 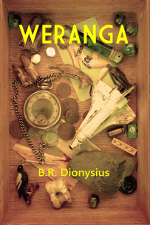 Ken Bolton and B.R. Dionysius emerge from different traditions, respectively: a New York School sense of everyday occasion punctuated by the presence and shaping forces of contemporary art (Frank O’Hara and James Schuyler are clearly present in Bolton’s diction); and a modernised kind of Romantic pastoral, littered with juxtaposed objects of the natural and contemporary world. Yet, at admitted risk of over-generalising, both of their recent books can be seen to be dealing with notions of how to write memory in poetry: how to write a poem to be honest to the process, even the implication itself, of remembering. How can language be used in the service of this retrospective vision, they ask; how does language, shaped by differing poetic forms, illuminate, distort or neutralise it?

Threefer extends Bolton’s ongoing study of how to best conceptualise a forever-shifting consciousness. His poetics moves in, and against, a personal and collective artistic and poetic milieu, littered with acquaintances, the urban, the voice of the autonomous poem itself, and the artistic works and figures he admires (even, sometimes detracts):

Its three primary poems – ‘Footprints’, ‘On Reflection’ and ‘Some Days’ – point to the book’s title, as in, ‘three for …’ or perhaps (in cricketing parlance) ‘three out for …’ They all adopt Bolton’s characteristically fractured step lines and sense of colloquial, immediate expression in the service of capturing the unsteady, distracted and forgetful mind as it thinks on its own movements, various subjects and the self-aware creation of the poem. Two smaller poems, ‘London Postcard’ and ‘The Funnies’, present themselves in what can be considered a more conventionally structured manner. ‘London Postcard’ is written in four cinquain stanzas, with the fifth a quatrain, reflecting on a photograph and the feelings of self it provokes in the speaker. It asks:

And eventually notes how art can end up:

Reverting again to the motif of the trio, ‘The Funnies’ cycles through three comics – ‘The Little King, Boofhead, Brenda Star’ – pointing to their ‘true archaic simplicity’, while simultaneously aestheticizing them in the body of the poem. The speaker finds themselves ‘astonished at that innocence’; at what they can come to mean to him despite, or in spite of, their apparent ‘simplicity’. Both of these poems illustrate the broader concerns of Threefer: reflections on art, which are truly reflections of how the self fits into the world; and how seemingly ordinary things, collaged into the poem, can take on a greater significance than their external reality would usually suggest.

In contrast to the playful architecture of Bolton’s book, Dionysius’s fifth collection, Weranga, presents itself in sixty-seven poems: each couched in a sonnet-like structure of fourteen lines, in mostly unrhymed free verse that ghosts rather than enforces pentameter. This gives Weranga a clear sense of ordered unity. The consistency of its structure – heightened by recurring references to space and science fiction, animals, the contrast of ‘linoleum’ to the country surrounds, guns and soldiers, oblique references to Greek mythology/history, images of birth and death – lends itself to a compiled narrative. This is a rural, seemingly highly personal, coming-of-age memoir, played against the similar growth of the Queensland region referred to in the book’s title. Its last poem, ‘Bowenville’, quoted here in full, takes a self-reflexive view of the rural setting that has been created throughout the book:

Although the ‘landscapes’ may be more memorable than the community’s ‘rhetoric’, it is only through the remnants of this ‘rhetoric’ – ‘bled’, as if genetic or life-giving – that the ‘landscape’ is given any description. This is partly the service of Weranga itself: to dwell on an extended moment in a man’s life through a language which will preserve it; which in its looking to the ‘stars’ will give it a resonance beyond the dirt and grit and persistent struggle – against life, death, sexual growth, boredom, growing up – that fade into vague, even forgotten, memory.

As ‘Bowenville’ highlights, it is the means of remembering that seem to curiously relate Weranga and Threefer, particularly in the implications of their differing forms. For each poet, the objects of their poetry illustrate how certain things can ‘jolt him back’ (as Dionysius puts it in ‘Weranga’). Like the cattle grid in Dionysius’ titular poem, the particular shape in a poem’s form revitalises or confuses memory.

Weranga is a purposeful reconstruction of memory, its vignettes lending themselves to brief and self-contained recollections of moments, rather than elongated meditations. By persistently returning to and subtly reshaping the recurrent motifs throughout the book, memory presents itself as something in need of being remade. From this controlled retrospection, the various symbols and notions that characterise a life are purposively drawn out to express their shifting significance. ‘Moon’ discusses pregnancy, using the moon landing as a grandiose metaphor – ‘her body, marooned by its own/Elliptical orbit, bent with spacesuit clumsiness’ – in stark contrast to the working ‘men’ coming ‘in for lunch’, whom the pregnant woman must still feed. ‘Stoic’, ‘Hourglass’, ‘Campfire’, and ‘Funeral’, on the other hand, all address the passing of the father: from the moment his ‘stoic’ nature fails him, perhaps partly enabling his death – ‘Nothing could kill him, but himself. His/Cellular rum rebellion took effect’ – to the speaker’s inability to remember the details of the ‘funeral’, which becomes a kind of barely-recalled film:

Later poems address a sense of teenage angst and entrapment in a place that, although enormous in landscape, becomes smaller in scope for the growing boy. ‘Tennis Court’ utilises its setting as a metaphor for this limitation. The insects under the lights of the court point suggestively to the life existent in this closed-in world, where (initially) chaste teenage affection blooms: ‘they sat hand/In hand inside the eucalypts’ grey tangy shadows.’ This, of course, develops into something more in ‘And She Was’:

The patchwork of Dionysius’s book, reading back and forth between the moments of a life narrative, between poems, between the insistence of its fourteen-line form, between speaker and country, between recurrences as they were and what they become, leads to this sense of memory as something to be worked: recreated in a carefully maintained form and language that serve to control memory itself.

From the outset, Weranga has an indisputable flow. Dionysius’s lines are eloquently constructed and sinuous, laying themselves out gently, almost caressingly, through his generous use of assonance and the persistent presence of an open enjambment. Diverting grammatical closure line-by-line, they keep the reader sliding on as images and memories of rurality and of childhood fracture, before emerging whole by the end of the poem. And it is this sense of wholeness that is central in Weranga, as if the text, in having its narrative strung out across snapshots of growing up in the country, semantically begins to embody not necessarily the setting or landscape itself, but the emotional nostalgia we bring to any memory of place and the emotional developments, sensations and traumas we associate with it. For this is a collection of poems drenched in nostalgia for the rural, and for the evaporating notion of its isolation in a rapidly technological world. As the central figure grows in the book, he sees the once-unlimited expanse of the country contract before him, stripped back to ‘parts to a mystery’:

Ultimately, the landscape of Weranga is this cluttered expanse of what is in the poem and all of the things that have been sucked into its ‘black hole’. Weranga is rich in the gradually (de)naturalised space and development of its speaker, setting and language. Yet, there is a lingering sense in reading Dionysius’ book and the imposition of his elected form that there is not a lot of variety in its development. Its vignettes tirelessly move on, shifting focus and moments of time, but never quite expand tonally. This is not to say that its voice struggles for realization in its persistent intonation. Weranga does invite rereading. However, the careful sense of over-construction seems to prevent the imagination from launching beyond restricted logic.

Pages: 1 2
This entry was posted in BOOK REVIEWS and tagged brett dionysius, David Dick, ken bolton. Bookmark the permalink.
David Dick is a Melbourne based writer, critic and poet. He has been published in Cordite Poetry Review and otoliths.