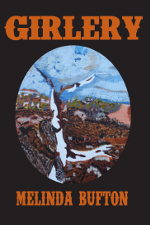 From the lolly shop of the good-time Hades girls

The title of Melinda Bufton’s debut collection, Girlery, asks to be read ironically, but is in fact quite apt, bringing to mind a repository of all that is ‘girly,’ in the same way that a reliquary houses relics. Alternatively, it could be a verb: something close to a feminine form of tomfoolery. One imagines a stern injunction to ‘cease this girlery at once!’ With titles such as ‘Dealbreaker,’ ‘Bumper Book for Girls,’ ‘Lollyshop’ and ‘I will call you smitten because it suits your crazy eyes’ among the twenty-three poems collected here, both these associations are appropriate.

These poems are not written in the traditionally lyric mode of contemporary poets such as L.K. Holt or Sarah Holland-Batt, and neither are they particularly experimental or language-focused in the mode of other contemporaries such as Astrid Lorange or Kate Fagan. Instead, the impulse behind this collection appears to be sociological or archival. It catalogues a moment of highly codified, 21st century, urban sub-cultural femininity easily recognisable to a knowing reader. The poems in Girlery are embroidered with references to the accoutrements of this brand of feminine identity, as well as other more general pop-cultural sequins: pencil skirts and garter belts; paste-ups and Japanese Syphon coffee; burlesque and rooftop honey. They riff on Little Women, Gilbert and Gubar, Kate Bush and Laura Ashley, with some ancient Greek goddesses thrown in. As the speaker says, with a wink, in ‘Snooks,’ ‘I have more in common / with that blogger girl in Williamsburg than I do with my kin’ (24), referring perhaps equally her biological family and the poetic canon. It is all ‘v v postmodern’ (24). These poems are full of hipsterish irony.

The great risk for these poems is that they will date. In the same way that a reader today may be put off by reading poems from the 1970s full of references to bellbottoms and patchouli and Karen Dalton, for example, tomorrow’s reader may find lines such as ‘3pm French service at the church of OMG’ (‘Continental Hourglass’ 28), or ‘Sometimes Jonathan Franzen’s face really / Overwhelms me’ (‘I will call you crazy’ 2) tired, or even impenetrable. A great number of contemporary readers may also feel lost among the references to Melbourne cafes and SMS-speak. However, what elevates Girlery is a vein of meta-reflection that runs throughout the collection, drawing these specific references into a broader consideration of both fashion and shifting constructions of femininity. ‘Risk Appetite,’ for example, adopts the tone of an instructional manual, warning that ‘A modern muse does not use laudanum / but thinks constructively about the value she has / to offer’ (4). ‘Dealbreaker’ similarly contrasts 19th and 21st century ideals of femininity, lamenting, ‘Oh all the sisters, you lovely bluestockings you / can’t have known / your fights would get me this’ (6).

Another weakness of this collection is its seeming lack of attention to its rhythms and lazy use of enjambment. Too often the reader is presented with ungainly lines, for example in ‘Dealbreaker’: ‘At least less of a propensity to cry at the hangdog poverty / as if pregnantly sensitive to the world’s full badness’ (6). Or, in ‘Goldsome’: ‘But first I took the high road; a corporate / entity all my own cobbled from the vestiges of the / suffragettes and the strategic plans, the querying vision documents’ (19). The line-breaks here, and elsewhere, appear as though they have been dictated by the width of the page rather than any consideration of rhythm or emphasis.

Girlery will not be to everyone’s taste. However, at its strongest, this debut collection is both political and sassy in its challenge to poetic doctrine. These poems are about taste, and they undermine the all-too-common assumption that cultural objects associated with fashion and femininity are less legitimate subjects for poetry than, say, philosophy or the lives of historical figures. Girlery reflects on culture and aesthetics in a manner that is both brave and, like the ‘bomb’ of the collection’s opening poem, set to self-destruct. Rather than attempting to hedge bets and display her cultural capital through references to canonical markers of taste and intellect, Bufton instead focuses on the present moment – on what is fleeting and soon-to-be superseded – because that is the nature of fashion and, likewise, notions of both femininity and poetic value.

This entry was posted in BOOK REVIEWS and tagged Emily Bitto, Melinda Bufton. Bookmark the permalink.
Emily Bitto lives in Melbourne, where she teaches creative writing at the University of Melbourne and Victoria University. Her poetry has appeared in Meanjin, Island, Heat, the Australian Literary Review and the Sydney Morning Herald. Her debut novel, The Strays, was shortlisted for the 2013 Victorian Premier’s Literary Award for an Unpublished Manuscript, and was published by Affirm Press in May 2014.