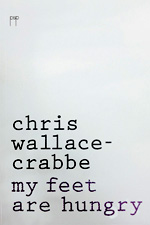 my feet are hungry by Chris Wallace-Crabbe
Pitt Street Poetry, 2014

Readers of Australian poetry will expect a new collection from Chris Wallace-Crabbe to be a work of erudition and wit. In this they will not be disappointed. Wallace-Crabbe is entirely in command of his craft and possessed of intelligence that does not waste itself in trivialities. The ends of lives and civilisations are often on the edges of these poems, sometimes at their centres. They are, though, consistently playful. For all the seriousness of the literary and philosophical ghosts who haunt this book (Plato and Freud among them) there is nothing ponderous about it.

The book begins with one of these historical revenants in the brief ‘After Bede’: ‘Our lives are built upon unlikelihood, / their poignancy oddly fragile / at the best of times / like snow that falls softly / into a ravaging bushfire.’ The fire and snow appear to come from the most famous passage of Bede’s Ecclesiastical History (II.13), where ‘one of the king’s chief men’, likens human life to the flight of a sparrow through a fire-lit hall, passing ‘from winter to winter’. These basic elements are reworked to an even starker image of impermanence.

Though this opening sets the key for the book, Bede does not reappear. Plato, by contrast, makes several appearances. ‘Fragrantly here all day’, which evokes a well-founded sense of coming crisis, both human and environmental, imagines in its conclusion the difficulty of any effective response, toying with Plato’s notorious philosopher kings ‘who’d have to make it all enforceable / and have the guns to make it happen’. They are bumped out by the unlikely hope of persuading ‘people to vote against their selves’. A different side of Plato appears in the conclusion of ‘For whom no pittosporum is opaque’, which moves from details of suburban walking to the topics about which its protagonist thinks with his ‘metaphysical hat on … outside under the cloudless dark’. Reflecting that god and universe might be coextensive and so not comprehensible, he stops at the question of ‘what is beyond everything’. The poem ends on the line ‘What then, said Plato’s ghost, what then?’. Plato’s ghost is a Protean one; the dialogues give materials for a bewildering number of Platonisms, as the long Platonic tradition has shown. ‘What now’ is a common phrase from Plato’s Socrates, and it is the aporetic Plato, always pushing the argument just that bit further, who is evoked here. This Plato is an appropriate accompanying spirit for my feet are hungry.

‘Wonderful Freud’ appears glancingly in ‘Fairly fine-tuned schedule wise’ but more centrally, though unnamed, in the collection’s title poem. This latter poem ruminates on a self in process, one with undefined edges. In this lies ‘the it, inconsiderate pronoun’. Translating Freud’s das Es directly into English as a homely ‘it’ rather than using the latinate Id effectively defamiliarises. It then cheekily becomes ‘a gremlin on the slopes of syntax, / needing a small green Irish hat’. Leprechaun and larrikin, the Id is at work in the loosely cohering self and in the mischievous poem.

This title poem is one of several that deal with the nature of the self and perception. Poems of perceiving (like ‘Our place and time’) sit comfortably with poems on the nature of perception itself (‘Nor am I out of it’). ‘The absent self’ imagines the world of sensations going on without the individual who once perceived them, attempting to imagine the unimaginable. Reference to ‘the mystical’ in the poem’s conclusion is risky, given the nebulousness with which this term is often used, but the tightness of the poem provides confidence that it is used knowingly. In the ending of this poem might be heard another philosophical ghost, the Wittgenstein of the Tractatus, for whom the mystical was the sense of the world as a finite whole, and death not an event in life but its limit.

Christianity plays an important if ambiguous role in these poems, from the jokey ‘And the cross’ to the starkly dichotomous ‘Diptych’. This final poem of the book (not counting the translation from Dante) hesitates between accepting/imagining deities, with ‘coloured pictures / nomadic myths and / kindred absurdities’ or seeing just ‘a giant overarching blankness’. The book’s final section seems to choose the divinity of coloured pictures. If this is the implication, however, the choice is not made in anything that might be taken as the poet’s own voice, but in a translation of canto XXVIII (the Earthly Paradise) of Dante’s Purgatorio.

The translation is elegant, and wisely does not follow the Italian slavishly, but its length and position are a little surprising. Following the modern ruminations on death and religion of the book’s third section, this passage sounds rather like contemporary reports of near-death experiences. It also brings us full circle to the beginning of the book with Bede and the crucifixion. The ending (‘I gazed across the stream at her again’) feels abrupt, more so than in the Italian (‘poi a la bella donna torna’ il viso aporetic’) and the beauty of Matelda is omitted. The absence of punctuation, which also differs from the original, leaves an impression either of flowing on or of the experience dissolving. For all its beauty, Wallace-Crabbe’s Dante makes an ambiguous ending to the book.

In a collection concerned with some of the most difficult and probably irresolvable problems of existence, an ambiguous ending is no doubt appropriate. There is much to be teased out in re-readings of all of these poems. This is a thoughtful and witty book, to be warmly recommended to readers of poetry in general, and especially those drawn to the shared territory between poetry and philosophy.