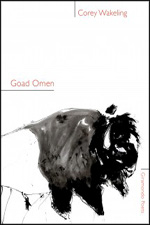 How do you hear the title to this volume of poems by Corey Wakeling? Goad Omen: two words that really slow you down as a reader, make you dwell on their unnatural pairing. Three dipthongal, molasses-slow syllables. They sound like a slip of the tongue, a conversational mishearing, or typo that should have been Good Omen perhaps. ‘Goad’ is a really old word, ambivalent here as it’s readable as either a noun or a verb, material and abstract at the same time – stick, prod, anku; impel, incite, drive. ‘Omen’ is another kind of referential flip-flop, signifying either a good or bad prognostication, black or white. Nothing in the extruded binary of this title, though, can resolve or clarify these indeterminacies. The meaning they produce is an estranging nimbus of uncomfortableness and unknowable fate.

Turns out this is emblematic of the ontology of words in Goad Omen’s poetic domain, and also of the off- and near-meanings they organise. Wakeling has a remarkably consistent voice, or voices, despite the arpeggio-like range of his shifts and changes. He delights in ironic adaptation/quotation, Malleyesque bathos, shifts between everyday idiom and graphic insistence (‘Pert nark’), alliterative burbling (‘their there-there shenanigan’), mock-seriousness (titles like ‘The Renaissance’), all kinds of surreal jump-cuts, and an Audenesquely arcane vocabulary – sopor, quidam, cryptomeria, bascule deglutition – unapologetically unAustralian, this. His language effortlessly avoids the tried and worn bromides of the poetic – predictable attitudes of the lyric ‘I,’ similes (a few only), deep imagery, rhetorical trajectories that reproduce affective curves – and yet with a mostly steady kind of syntactical plainness as structuring underlay.

Wakeling’s tone is never smart or defensive or self-regarding, he’s always exploring something, responding to the linguistic possibilities of the world at every level, however difficult it might be sometimes to decode. This happens to be related to his distinctive adaptation of a poetry of sentences, inherited variously from Language practitioners like Ron Silliman and Lyn Hejinian, and including Jeremy Prynne, and back behind them the Frank O’Hara of ‘Second Avenue’, but precociously incorporated into his own style. The line is important, but the page is not a field for him. Formally Wakeling is one of those poets who seems to hear poems in blocks, in sentences, and so lineation is mostly to serve the flow, turns and, sometimes, jerks of his syntax.

Hence also his propensity for the long line, a sign of one kind of expansive mentality. This is intimately related to the remarkable effects he gets with syntax, probably the single most important contributor to the distinctiveness of this poetry. A random instance, only slightly more agglutinated than usual, from the long central poem in this collection, ‘Behemoth’s Leviathan’:

At one level this is poetry as soundscape, although it displays little of the attention-seeking behaviour of sound abstraction in experimental work. Wakeling doesn’t want to manipulate the sounds of words or make them more onomatopoeic or anything, he simply enjoys their unique phonics, individually and in combination. (xanthorrhoeas, actually=blackboys/grasstrees; eirón=dissembler, Sp.; nescient=unknowing; gerbil=desert rat.) As you also see, this is a sentence where the syntactical elements have the appearance of simply being strung together, one after the other, nothing grammatically fancy. But it’s slightly off at almost every point: you read back and forward, trying to get the sense: is ‘exhibiting’ just hanging free, or is the cityscape exhibiting? Is there an article missing from ‘exhibiting callow figure’? Normally, we’d expect metamorphosed ‘into’. The hinge at ‘Who fasts’ drives the reader back to figure out if the referent is the ‘Urban yeoman’ or the ‘callow figure’. Is the boy in uniform salivating at the ‘mouse traps in conversation’, or what? These kinds of provocations to the reader never let up in Wakeling’s poetry. And some readers will no doubt find his poetry provoking. There are ghosts of ordinary meanings, like subjects, themes, geographies, sharp observations of nature (‘bottlebrush seeds discharging like poppers’; cockatoos are cacophonists), but the sprung syntax never relents. Every line challenges our ingrained, instinctual searches for recognisable meaning, reminding us – whether we like it or not – how poetry can be counter-instinctual language in multiple ways.

Sometimes there are moments when Wakeling needs to fix the style, steady the focus, and he can do that, too. In ‘Albert Tucker’s Fitzroy’ for example, there is a kind of relatively straight-forward scene-setting:

Pages: 1 2
This entry was posted in BOOK REVIEWS and tagged Corey Wakeling, Philip Mead. Bookmark the permalink.
Philip Mead is Chair of Australian Literature at the University of Western Australia.