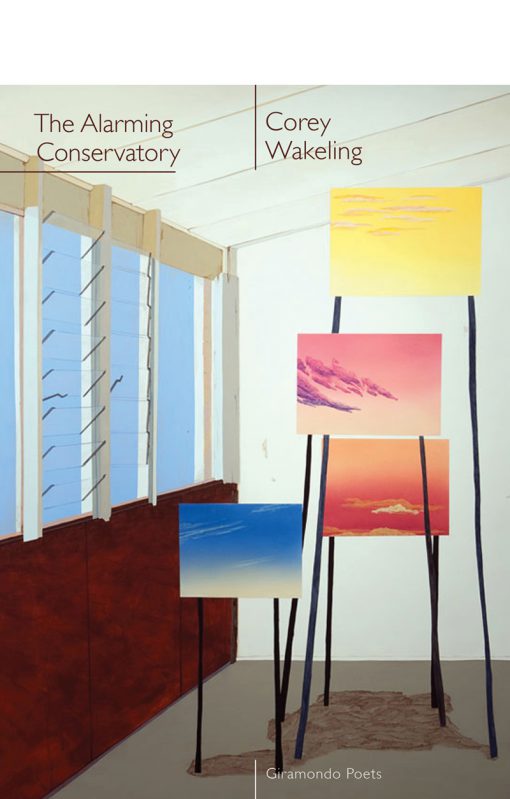 The Sydney launch of Corey Wakeling’s second collection of poetry The Alarming Conservatory at Frontyard Projects in Marrickville upended the traditional build up of acts that most expect from a poetry launch, with poets reading in an order drawn from a hat. The environment is amicable and warm, with young children running and playing and affectionately stealing attention from the readers by unwittingly performing alongside of them.

When Wakeling reads (third out of the six readers, the launch speech by Astrid Lorange is fifth), he commences with a long absurdist style poem Alfresco dining area dining alfresco; it’s a long poem, performed at high speed with no pause, and featuring preposition-propelled lines such as:

Actions are always being done to the alfresco dining area: it is given an eviction notice, a loft, and a basement, punished by patrons levitating, swimming and dining at competing restaurant, confused by patrons licensing their own restaurants. It finally comes full circle by, itself, dining alfresco. It’s fitting, here, too, to note that Wakeling has a doctorate in English and Theatre Studies. An exploitation of the performative nature of language is never far from the work, nor is a constant reconfiguring of language, objects, place and structures (linguistic, familial, political, social). It reminds me of how in Beckett’s theatre, the subject of Wakeling’s thesis, objects often become the focus when dialogue stops, and how frequently en scène there is a negotiation of subject-object.

Talking to a friend from Perth, she provides another context for this poem: In 2017, local counsellors tried to reinstate previously banned alfresco dining areas in the CBD, and put these spaces ‘on trial’. The term ‘alfresco dining area’ and a debate around their existence taking momentary prominence in local politics.

This situation strikes as ripe as a premise for a Wakeling poem, that often twists found fragments and occurrences to a logical-illogical end and interlays reference and place, as in ‘Pupils of the Goat’:

Referencing Dante’s Inferno and Beatrice, chalk circles, hip hop, Katherine Prichard, and Datsuns, these poems are phenomenal in that that gather so much phenomena.

There is a tangible joy at an excess of language and its resituating; for all the startling incomprehensibility that arises, the collected work is also grounded in the everyday and the current environment: Take the opening epithet for example: ‘He took you for a bubble gum America/ But now he finds that you speak kangaroo English’, a line attributed to a barista at the Hamburger Banhof in Berlin, or in the poem ‘Ecstasy’, that shifts common salutation:

There is never simply one thing going on. There is much to work under and through, themes expand and contract, taking on new meanings and contexts at each shift. They are poems that you can spend time with, deducing reference and connection, or read rapidly, startled by the strange juxtapositions and metaphors, perhaps intended to jolt one out of complacency.

The concept or noun ‘Australia’ also undergoes shifts of form. Aus is referred to as a ‘secret car park’, a goat, and, in ‘Available for Public Events’, is turned into stationery: ‘Poor Australia, he has no recognised partner or legal aid. / But he must be assured, we’ve rolodexed him.’

Having grown up in Australia, the title of the volume The Alarming Conservatory evokes several allusions. It brings to mind a Howard era ‘be alert but not alarmed’ mentality; the conservatory aspect could refer to a humid greenhouse, school, or alternatively, to a place that breeds conservatives. The title Alarming Conservatory could function simply as a moniker for colonial Australia.

Themes of an Australian tepid comfort are a recurrence, as in the poem ‘Ward’, that crawls through the Yu Yangs and abounds in lines that mention couches:

The couches intrigue by a slow invitation which becomes entrapment (…) the constant reminder / of Albert Namatjira, who is the only immediate rescue / here and now from the couches. / The saluting couches./ (…) Like a couch, the advantage is earned by those / who sit with you to console and comfort themselves.

The meaning, punning, and resulting associations in this volume are never settled, and frequently when I’m reading I’m saying ‘What what what?’ in my head, or out loud, trying to find level ground that is always escaping. But the poems are deeply funny and revelatory of current economic farcicalities and social perspectives. For example, in ´Being Paid to Live the Dunes’ that begins, ‘you are ready for the end of the world because / you are paid for it, and the apartment is good.’ This continues in ´Sydney sydney’, that speaks excessively and appropriately of landowners and in ‘The Person is Real’ that closes with the line: ‘Good bargain of education, you bought us up – yes, bought! – so well.’

Dissonance and decline emerge as other themes, two poems, in fact, are elegies (‘Elegy Written in a Dead Metropolitan Library’ and ‘Elegy for Epithalamium’). The poems capture a shifting world, and can be read more widely to comment on virtuality, mediatised environments, and family.

The ‘Afterword’, too, is worthy of note. Shifting form, it presents a lucid eight-page poem-essay that is vividly transporting and recounts in a measured, gentle and suspended tone the poet’s childhood in Western Australia. Cars trips to Fremantle, garage sales, adventure stories, comics, fiscal difficulties. It provides a commentary of the social climate: ‘I grew to dislike the perpetually bold sky of Western Australia (…) the weather to me mirrored a self-satisfied, recreational population’ and of the situation of childhood where a lucid narrative is easier to obtain.

Reading the afterword following the intricately layered, complex and at times close to indecipherable poetics, is somewhat similar to having the answers and the clues to the previous day’s cryptic crossword side-by-side and working backwards to fill the grid in.

Frequently in these poems, the economic climate, neo-liberal free market, and housing market are all thrown together; The Alarming Conservatory is the site of the fall-out. It is recommended reading, and provides a counter narrative if you’re reading closely.

This entry was posted in BOOK REVIEWS and tagged Corey Wakeling, Ella Skilbeck Porter. Bookmark the permalink.
Ella Skilbeck Porter is a poet and writer from Sydney interested in visual arts, translation and chance operations. Her work has appeared in Rabbit, Cordite Poetry Review, Southerly and UTS Writers' Anthology, among other publications. She is a 2018 Hot Desk fellowship recipient.