Translation and Experiment and Translation: Some Girls Walk Into The Country They Are From by Sawako Nakayasu (and Friends) 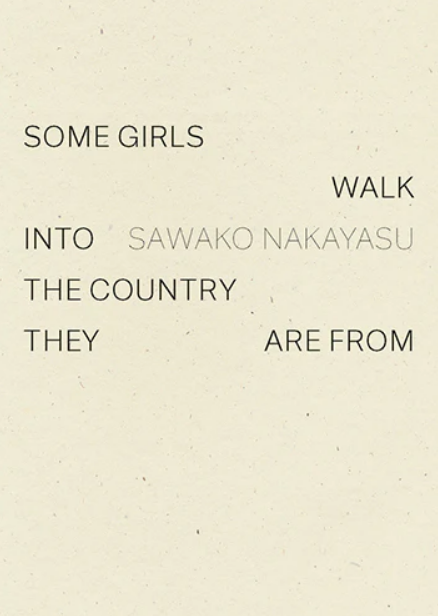 Some Girls Walk Into The Country They Are From by Sawako Nakayasu
Wave Books, 2020
f

This review concerns poet Nakayasu’s most recent major collection (as of March 2022), the self-translated adventure that is Some Girls Walk Into The Country They Are From (2020). Some Girls is one of the most advanced realizations of an experimental writing practice informed by modernist approaches to literature explicitly between languages and sensitive to a multilingual compass. Global poetries today go far beyond the masquerade model of deliberate and scholastic language translation Ezra Pound developed by way of the persona. We now live in an Anglophone sphere of intercultural and interlingual normalcy in which lived realities reflect multiplicities and changing frontiers of language.

In keeping with this more sociological shift in the language of poetry today, Some Girls happens to be a social enterprise. The book is a multi-author/translator as well as multi-lingual work, involving the work of poet–translators Miwako Ozawa, Karen An-Hwei Lee, Kyoko Yoshida, Kyongmi Park, Hitomi Yoshio, Lyn Xu and Genève Chao, who translate poems that themselves comprise the collection. This decentralisation of author-ity, of origin-ality, and of individual-ity makes the persona concept a very distant forebear to the new directions in translation and invention found here. Today, under the direction of Nakayasu, the logic becomes the dynamic palimpsest, and the swarm. Poems reappear, disappear, translated into French, Japanese, retranslated into English, but also deliberately various idiolects and accumulations, all in order to dissolve the binary of linear transmission between two counterparts. When we live between languages in parties of translation and generate poetry by it, what becomes of the designations ‘author’ and ‘reader’ then? Nakayasu, one of the most important translator–poets of our time, provides us with some new directions.

These principles of translation hypothesized in Say Translation is Art (2020) explain some of the innovative ideas about writing that orient Nakayasu’s rescaling of authorship and creativity post-translation. Nakayasu deconstructs, in other words, what it is that undergoes translation when translation might be said to happen. That “what” belongs to all poets: the subatomic, synaptic emergence points of word. Transposition is the most commonly-assumed role of translation, and that is quickly deconstructed here. Some Girls, a book of poems ‘authored’ by Nakayasu, embraces and empowers these sites of supposed untranslatability – ‘breath’, ‘particle[s] of thought’, book context, oeuvre context, cultural placement – popular with language purists. Indeed, Nakayasu’s own curriculum vitae points to the ways in which reassessment of translation’s place in the context of language art might stimulate new ways to experience language. We are familiar with the modernists who in the twentieth century resituated translation as the wellspring of new poetics. Those wishing to be familiar with twenty-first century directions would do well to observe Nakayasu’s endeavours.

Nakayasu, a Japanese-American poet who has lived her life both in the US and Japan, whose first book was published in 2002 by transpacific publisher Tinfish Press and whose latest book is published by innovative publisher of contemporary poetry and poetry in translation, Wave Books, is one of the outstanding translation innovators of the day. Crucially, Nakayasu is the renowned translator of Japanese modernist Chika Sagawa, a project of two decades, and most fully compiled in The Collected Poems of Chika Sagawa (2015). Sagawa has been a lesser-known modernist figure in Japanese literature until now, but whose translation to English by Nakayasu has meant a complete reappraisal of modern Japanese literature. Then, more recently, Nakayasu translated Yi Sang, the radical Korean poet a part of whose output was written in Japanese during colonization (2020). Nakayasu has been attracted to translation projects that themselves question our presumptions not only about translation and intercultural literature, but about writing and language themselves. Some Girls testifies to what such a career in translation can bestow upon a writer’s authorial and linguistic consciousness.

Pages: 1 2 3 4
This entry was posted in BOOK REVIEWS and tagged Corey Wakeling, Genève Chao, Hitomi Yoshio, Karen An-Hwei Lee, Kyoko Yoshida, Kyongmi Park, Lyn Xu, Miwako Ozawa, Sawako Nakayasu. Bookmark the permalink.
Corey Wakeling is a writer and critic living in Tokyo. He is the author of collections Gargantuan Terrier, Buggy or Dinghy (Vagabond Press 2012), Goad Omen (Giramondo 2013), and The Alarming Conservatory (Giramondo 2018), and a monograph on Samuel Beckett's dramaturgy entitled Beckett's Laboratory: Experiments in the Theatre Enclosure (Methuen Bloomsbury 2021). Corey holds a PhD in English and Theatre Studies from the University of Melbourne. His next collection is entitled Debts of the Robots.