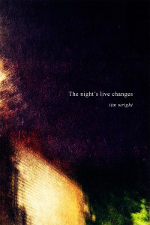 Free Will and the Clouds by Rob Wilson
Grand Parade Poets, 2014

For all their contemporaneity, both of these books work with themes, or better, anxieties, that have always been at the heart of lyric poetry. In different ways, they are concerned with avoiding easy comfort in language and shying away from time and mortality.

Both books use the old trick (and a good one) of starting with a quietly atmospheric poem. Tim Wright’s The night’s live changes begins with: ‘sky currently gold’. Despite the suggestion of a romantic soft-focus in the title, the poem itself sparely and rapidly sketches the surroundings in which the rest of the book unfolds:

The background is urban, the speaking voice a little uneasy in it, and other people are never far away, though not actually present. In later poems, the music that can only be heard when the door to the beer garden opens will come closer.

There is a pervasive nostalgia to the night’s live changes, especially nostalgia for the newness of late adolescence/early adulthood:

It’s the details that are evoked in this nostalgic mood that give the poems their specificity and bite. ‘Music Poem’, for example, begins by missing ‘when music was life or death’ but the poem’s speaking voice reminds itself (and its readers) of ‘furry speakers’, a ‘cassette of a band / somewhere in photocopied Europe’ and ends with ‘Fugazi banging / at high volume engine off / with all the doors open dearly departed’. In the long poem ‘November’, where past and present mix fluidly, appear ‘The Smiths / defamiliarised’ (by being played at the wrong speed) and in the poem’s present:

Not a bad image for what the poems in this collection do, too: recalling the eighties and nineties from the present, recording memory of a really quite recent, modern coming of age through an unlikely and traditional medium. But these poems do not pretend to create any sort of illusion of the past as present. They give instead the process of remembering. With its immediate visual impact, ’November’ is a sequence of memory specks gathered together, or points of spot-lit detail. This process of remembering winds its way through details of the present, as the speaking voice of the poem determines to write something before the year ends, trying it in different places outside or in the car or back in the kitchen.

If this tightly constructed little book begins by sketching its setting and themes in the first poem, it ends with equal awareness and discipline in its final poem, ‘Correspondence entered into’. After all of the restlessness and movement of the preceding poems (‘Moving through the world / is what I am interested in’, Wright notes in ‘November’), this closing poem offers at least a provisional settling. Yet the ambiguous reworking of the common phrase in the title suggests that this, too, is only provisional. It might imply cohabiting with another person (a kind of ‘correspondence’ to enter into) but it could also suggest that correspondence – negotiation – is not over. There is still an ad hoc feeling to ‘the sober missions out / and pieced-together / at the last minute weather’ of the last lines. The night’s live changes leaves its readers with avoidance of too strong or certain a closure, just as it had avoided too obvious a focus for its pervasive nostalgia.

Both The night’s live changes and Rob Wilson’s Free Will and the Clouds are tightly formed collections that have a clear sense of what they aim to achieve. Neither outstays its welcome. Both, I think, may look quite different when they have become early works in a longer series of books. As Wright’s book succeeds in avoiding the kinds of sentimentality that it risks, so does Wilson’s avoid the idealisation of poetic vocation.