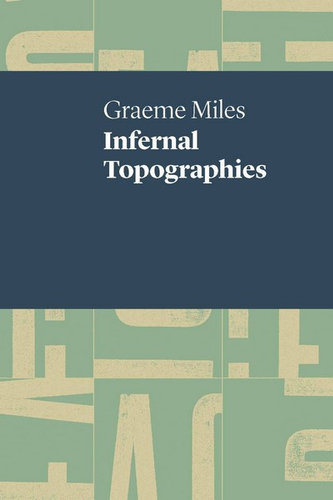 In Infernal Topographies, Graeme Miles traverses mythology, landscape and notions of selfhood to reveal moments of approachability and tenderness that are rare in Australian poetry. The poems are not so self-referential, nor overtly ambitious. Miles wants to get lost in the musicality of the moment, or the surrender of a second, and so his poems tend to read like reflections on an event that would have otherwise been lost to the everyday eye. Such is the charm of his words. When one reads Infernal Topographies, one reads them not to witness an act of innovation, or sound and image taken to completely new directions, but to meditate on one singular Tasmanian’s relationship to selfhood and tradition.

Let us start with what I consider the strongest poem in the collection, ‘Dunes’. Divided into three shorter poems, ‘Dunes’ peers deep into what appears to be the childhood memories of tan unnamed narrator. The invocation of the poem is a coalescence of memory into landscape.

It’s hard not to imagine the swirling sands while reading these lines: note the wiggling of the sentences caused by the enjambment, the words toppling over themselves. The organisation brings the ups and downs of the dunes into the structure, and yet the language is fundamentally about memory, with ‘love bites vivid on [the] neck’, moments of ‘bodies newly mature.’ What else causes the feeling of being in a sand trap? The chugging of Miles’ language, its perfect combination of mundane household words (‘smells’, ‘food-like’ ‘incense’) with the topographic (‘coastal, acrid, elevating’). The poem imprints the reader in a dust storm by hurling honest lived experiences with no stop for reflection. It acts as an excellent exemplar of how to keep a poem grounded in a specific ecology while writing about events that have nothing to do with that space at all.

The second poem in the suite moves on to being eighteen, the narrator imagining the life he has lived is in fact a dream.

These lines summon not only the sensations of sight but also the beats of music. Comparing ‘blood-vessels’ to the colours of the sky immediately renders a certain image into the reader’s mind, but then we remember that we are comparing ‘pulse’ with ‘rhythm’, and so we think of the thudding of blood vessels against the arteries, that velocity, that urgency, coupled with the quotidian suburban lawn. The line exists to remind us of the reality behind dreams. Despite the language being lofty, filled with all of the opacity of the ad-hoc clacking of words, Miles seeks to ground us in the corporeal. He is attempting to do justice to not only the surrealism of being inside of a dream, but also the very real parameters of it.

The final poem in the suite brings us to a Tasmanian street – boys partying, getting into fights. One feels fully immersed in the teenage years of suburban and self-destructive Australia. And yet, the ending does not personalise the boys further, nor does it give the reader a chance to delve into their hearts. Instead, Miles takes a cosmic glance upwards.

Miles’s poems reflect on vastness and the meaninglessness of individual experience. Sometimes this is done through linking the daily with the divine, the lordly with landscape. Other times, it is through referencing the traditions of Greek mythology and Hinduism. In ‘The Iconoclast’, a discussion takes place between the narrator and a sculptor who has been hired to fix damages done to murtis outside a house.

The language is simple yet descriptive. The pared-back words give the narrative a sense of reportage. The point of the poem is not to beautify words, but to render a scene, and engross the reader in it. The resulting poetic effect comes, then, not from the language but from the gravitas of the story itself. At the end, the sculptor says, ‘I don’t worry about punishing him, the god will punish him’, implying that those who do bad to others will inevitably receive their comeuppance. And yet, the poem ends not by turning a circle to the conceit, but by sacking the premise entirely:

The rhyme between ‘gone’ and ‘charms’ solidify what is a strong ending to this fable masquerading as a poem: often, those who preach justice are the ones who act unjustly the most.

Pages: 1 2
This entry was posted in BOOK REVIEWS and tagged Graeme Miles, Kiran Bhat. Bookmark the permalink.
Kiran Bhat is an Indian-American traveller, polyglot, and author. He is the author of the English-language story cycle, we of the forsaken world... (Iguana Books, 2020), the Spanish-language poetry collection Autobiografia (Letrame Editorial, 2019) the Mandarin-language poetry collection Kiran Speaks (White Elephant Press, 2019), the Portuguese-language story collection Afora, Adentro (Editorial Labrador, 2020), and the Kannada-language travelogue Tirugaatha (Chiranthana Media Solutions, 2019). He has had his writing published at The Brooklyn Rail, The Colorado Review, The Florida Review, Eclectica, Waxwing, The Free State Review, Cha, The Mascara Literary Review, The Chakkar, and several other places. You can currently find him nested in Melbourne, but he calls Mumbai his eternal home.