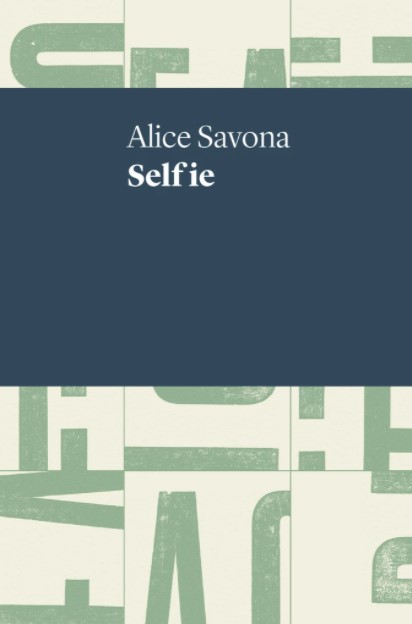 Reading Alice Savona’s Self ie feels a bit like taking a vacation inside a palindrome. It’s a wonderful escape, albeit sometimes fraught with all the rocking movement, backwards and forwards, until you aren’t sure what the runes and symbols that make up the words even mean anymore. The deconstructionist postmodern poetics are evocative and relentless throughout Self ie and the self-awareness threaded throughout the entirely intentional linguistic activity is at times dazzling to the point of dizzying.

Throughout Self ie poems often take up all the space of the page, ignoring any idea of traditional line spacing entirely. Other times they seem to rely on negative space, leaving the page sparsely populated with words. The result feels like fine artwork. Words scrawl across and out of the page, with misspellings and fragments sometimes seeming unintentional (until they slap you across the face with poignancy), and sometimes feeling directed right at you (until you realise they are a mirror, referring only and always to themselves). Self ie is, perhaps, primarily concerned with the visual, and is exactly what it says in its title: a captured image of the performed self.

There is, however, so much energy in Self ie that the poems seem to impact deeply, somewhere in the gut. At times the collection feels like an experiment in embodied responses to language: so much of reading Self ie seems to be almost visceral, a felt sense. In fact, the poignant lines, the repetition of those lines, the italics and symbols and spacing and line breaks create such an embodied responding that sometimes the instinct is to stop. Make a cup of tea. Sit back and let the sounds of the words as you read them in your mind just wash on over you.

Potentially, we see a whisper of the process of composing moments of complete absorption in the poem ‘Prognosis’:

In poems like ‘Prognosis,’ where the syntax shifts to fragments, revealing Haiku or Zen-Koan-like morsels of meaning, we can see that Savona’s text is refreshing and innovative and all those things, yes, but it is also very deliberate and clever. Furthermore, the text is at times almost surprisingly emotive, as revealed in lines such as, ‘He finds your tears more alien than your anger.’ from ‘Verisimilitude’. There is of course depth of knowledge here (one doesn’t have to read too far to ask the question: is the author also involved in some science of the mind? Answer in bio: resounding yes), and clear mastery of a technique that seems to be creating a nouveau experiment of the avant-garde. And at times the result is laugh out loud hilarious. The irony, word play, optional syllables, in ‘Hypothesis’, for example, ‘Father (f) (h) (ch) ucks mother,’ is utterly affecting, if in a droll, sarcastic, perhaps taboo sense. Tragicomic springs to mind. When I first started reading, I immediately started thinking of Charles Bernstein’s A Poetics and his insistence that ‘poetics is the continuation of poetry by other means’ (Bernstein, 1992).

Bernstein’s ‘other means’ abound here. Lines of poems double up, exchange meanings through movement and repeat themselves seemingly ad infinitum for emphasis. Discombobulation abounds. Fonts change, symbols enter and exit, things stand in for words, which are already standing in for perceived signification. By the time we arrive at the entire final poem sequence, ‘Honey’, we discover that the entire collection is, perhaps, a practicum, a science experiment masquerading as a collection of poetry. The abstract seems to be something about uncovering underlying, deeply human uncertainties:

In ‘Honey’ we have a cut-up, a found poem discovered in the collection itself, a festival of reframing, which perhaps conveniently dissects the collection for us. Or perhaps it’s merely meant to display the Cliff notes to the collection: the important take-aways, the pith, the skip-to-the-ending revelation. And though this type of unveiling process might seem trite or forced anywhere else, in this collection the self-reflexive naming practice doesn’t ever make the reader feel that the writer is attempting to be coy, nor trying to explain anything away. This example of unveiling is also from ‘Honey’:

Pages: 1 2
This entry was posted in BOOK REVIEWS and tagged Alice Savona, Ivy Ireland. Bookmark the permalink.
Ivy Ireland is the author of Incidental Complications (2007), Porch Light (2015) and The Owl Inside (2020). Ivy’s literary awards include the Australian Young Poet Fellowship, the Harri Jones Memorial Prize, the Thunderbolt Prize, the Newcastle Poetry Prize local award, and she was runner-up in the UC International Poetry Prize in 2019. Ivy completed her Ph.D. in Creative Writing at the University of Newcastle and her poetry, essays and reviews have been widely published in journals and anthologies such as The Anthology of Australian Prose Poetry, Cordite, Overland, Mascara, Going Down Swinging, The Blue Nib, Blue Dog and Plumwood Mountain.