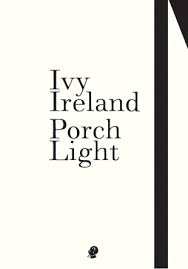 By way of introduction permit me to share that for some reason I keep conflating this poet’s name with the title of her latest book. The result is a hybrid of name and place, forming a vague ‘place-name’ in the utterly made-up signifier ‘Porchland.’ Working back, this topos, to my mind, alluding to a libidinous, transgressive and, above all, fertile ground, is formed out of the name of the talented poet, Ivy Ireland, and the title of her second collection of poetry, Porch Light, whose eponymous poem quotes Tom Waits in the epigraph: ‘How do the angels get to sleep when the Devil leaves the porch light on?’ The line anticipates the restless intensity of Ireland’s poems, their suggestive provocations and their quality of seduction. The collection itself generates a particular atmosphere, a strange sense of terrain or place, which my slippage unintentionally and somewhat felicitously conveys. ‘Porchland’ serves well to signify liminal habitations and exchanges, and in Porch Light, Ireland constantly draws attention to fluid scenes of self-construction in the badlands of troubling absences and expressive and monstrous bodies.

Porch Light is divided across two parts: ‘Space Opera’ and ‘Follies.’ The playful categories foreground Ireland’s canny boundary logic, privileging a poetic inquiry into the ways we simultaneously know and cannot know the zones the body inhabits. Do we belong to the big or the small, the major or the minor, the expanse or the in-between? As a whole the collection is graceful and stylistically even, with the compressed, shorter-lined poems belonging in general to the first part, and the more expansive, conversational prose poems belonging to the second. However, there are some satisfying crossings between these loose formal boundaries. Most noticeable among these is the placement of the first poem, ‘Porch Light,’ whose seven large parts form clouds of run-on lines that express an excess of voice and energy, an excess of awe (and perhaps foreboding) at some undefinable enormity that shapes the mood of the collection.

The urgency in the half-rhymed, run-on lines of ‘Porch Light’ is immediately crosscut by the poems that follow – ‘Waxing Moon in Virgo,’ ‘High Tea with the Muse,’ ‘Equilibrium’ – whose prim, highly controlled lines signal a temporary shattering of those expansive energies.

The shift in momentum is a wonderful rendering of the fragility of voice. A little reminiscent of Elizabeth Bishop’s ‘Two Mornings and Two Evenings,’ the measured pace of ‘Waxing Moon in Virgo’ does not signify a turning away from the cosmic chaos, but rather a recalibration that attempts to incorporate the specific, or the small within the vision: ‘surprise still enters with black tea. Perhaps ginger.’

The accretive logic of this collection makes something baroque of liminal bodies, a recurring trope. Just as Ireland’s poetry interrogates the spaces the body inhabits, it also draws attention to the unknowability and mystifications of the body itself. In the ekphrastic ‘Push: Sylvie Guillem & Russell Maliphant,’ the bodies of the fabulous dancers articulate a kind of suspended identity, or rather, they disarticulate an idea of ‘self’:

Guillem’s late-career performances were brilliant in part because, while they positively vibrated with the ‘big’ old themes of mortality and mediation, they were never obvious. They felt dangerous and new, I felt, because nobody had danced like that before. The ‘Push’ performance is an apposite muse for Ireland, as her poetry dances across a gamut of cosmic, mythic, ecological, scientific, visceral, animal and ghostly scenes. The ambitions are large, but the art is inventive, constantly wriggling somewhere out of its own solid structures. To quote from the poem ‘Nuclear’: ‘Nothing’ in Porch Light ‘is ever obvious or contained’ (51).

In ‘Venus Transits’ the speaker addresses an ambiguous, at times sinister planetary body: ‘We all know that your emergent seduction is / wind that whips and whirls through / airs bitter and fast enough to tear / heads off’ (29). This poem continues in the trajectory of ‘Push,’ locating a body in space as a site of contestations and contradictions. Beyond the voluminous skirts are ‘more revisions of deep time and Big History’; ultimately, all are tricks, foils, screens and evasions:

The passage recalls one of Guillem’s beautifully flip gestures, the mannered shrug that betrays training and form precisely to shrug off training and form: a cultured life giving way to wilderness. Could we quietly flit out of archetype? And should we? The speaker implores Venus: ‘Teach us to be one thing and yet another mystery entirely […] a synthesis of self and shadow’ (32).

But this kind of appeal exists within a flux of many attitudes and positions, including some flickers of cynicism: ‘[…] if we read / more critical theory can we / possibly paraphrase or will / it do nothing’ (‘sky,’ 68). There is also a delicious tactility in Ireland’s iterations of the in-between:

For all its intensity, Porch Light is also fun. While it is intellectually rigorous, for all the questions around life and not-life, it is not excessively serious. In ‘Strangler Fig,’ the speaker casts the line, ‘if life is the scientific definition we grant it’ (36). The reader might remember that science in fact has no consensus on the definition of life to be granted. Ireland exploits these suggestive ironies with wry, subtle wit. The final poem, ‘The Gaps,’ echoes this line in the vernacular:

Porch Light is an ambitious work, rendering the enormity of life – as we (don’t) know it – through intense, often grotesque visions of beauty. But Ireland’s poetry is also playful as it carves out its topos, dwelling in a liminal zone – a seductive porchland of half-hidden bodies and worlds.

This entry was posted in BOOK REVIEWS and tagged Ivy Ireland, Lucy Van. Bookmark the permalink.
Lucy Van is an associate researcher at the University of Melbourne working on a monograph called The Beginning of the Poem. Her spoken-word EP in collaboration with Laila Sakini, Figures, was released by Purely Physical (UK).