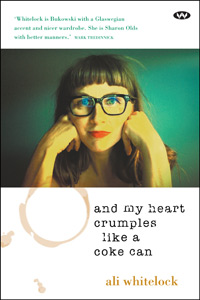 and my heart crumples like a coke can by Ali Whitelock
Wakefield Press, 2018

Despite the sorrow of its title, and my heart crumples like a coke can will have an utterly expansive effect on the reader’s beat-box. My little heart almost burst as I read through this collection for the first time. And then the second. Like some classic 90s rom-com – or was it drama? – that you watched and then re-watched every weekend on VCR as a teen, Ali Whitelock’s book seems to encourage a closeness, invites the reader to experience a genuine connection with the poet/protagonist and with their bevvy of sidekicks, both the heroes and the villains. I find myself genuinely touched by the liquid, visceral rawness, the careful simplicity and confessional glory of Whitelock’s poems.

Perhaps it has something to do with the seemingly breezy style; I picture Whitelock scribbling these poems in five minutes – maybe ten – on the underside of napkins in a crowded café somewhere on Glebe Point Road, the Bukowskian edginess of it all just floating off her fingers to bless everything it touches like butter grease. This, I thought as I read, is precisely the poetry I would like to write. This, I thought, is the poetry I should be writing. Why am I not writing this bloody poetry? I thought, these odes to the horrid heat and shopping centre scourge of of the suburbs, the aging body, vaginas, chicko rolls and the farts of the dying? I am awestruck when confronted with such passages as this one, from ‘what you must you do/ you must keep your mouth shut’:

This excerpt – and I would have included the whole poem if there was room for it – reveals Whitelock’s singular flair. The emotive content is moving without falling into sentiment, the motif and metaphor clever without leaning towards the pretentious. Even the centred structure works to jolt the reader into the importance of the particulars. This familiarity – imperative yet as casual as a conversation with a bestie – is I believe, is the kind of tone we all aim for, while endlessly editing and re-editing that seemingly unavoidable bullshit out. Her no-holds-barred, uncensored honesty when it comes to the small things – snoring tape, choice of lipstick when you turn fifty, brand of cooking chocolate – and the terrifyingly large things – death, exile (both voluntary and forced), aging, the mid-life affair, the aftermath of the affair – is so powerful it is contagious. Here are a few lines from ‘your friend said it was a love poem’:

This blunt conversational tone is echoed, with perhaps even more harrowing honesty, in this excerpt, from the stand-out poem, ‘water’s for fish’:

These excerpts also highlight the less cohesive aspects of the collection, which are the slightly discombobulating lineation choices, and collisions of atypical sentence structures. Quite often, the poems appear as performance texts adjusted for the page; sometimes fully punctuated and precise, and sometimes – part emphasis, part rebellion, I’d imagine – utterly not. While Whitelock’s lineation most often works to build emphasis, at other times it can start to feel a little heavy-handed, especially when the powerful and poignant word choice is more than capable of speaking for itself and perhaps needs no further emphasis. That said, anyone who has read the Beats, perhaps especially Bukowski (who is clearly, wonderfully, a strong influence on the collection), will have little or no problem navigating the momentary bumps caused by unpunctuated sentence collisions. Certainly, when listening to these poems read aloud (in a smoking hot Scottish accent; Whitelock is an impressive reader), any thought about formatting fades away.

Pages: 1 2
This entry was posted in BOOK REVIEWS and tagged Ali Whitelock, Ivy Ireland. Bookmark the permalink.
Ivy Ireland is the author of Incidental Complications (2007), Porch Light (2015) and The Owl Inside (2020). Ivy’s literary awards include the Australian Young Poet Fellowship, the Harri Jones Memorial Prize, the Thunderbolt Prize, the Newcastle Poetry Prize local award, and she was runner-up in the UC International Poetry Prize in 2019. Ivy completed her Ph.D. in Creative Writing at the University of Newcastle and her poetry, essays and reviews have been widely published in journals and anthologies such as The Anthology of Australian Prose Poetry, Cordite, Overland, Mascara, Going Down Swinging, The Blue Nib, Blue Dog and Plumwood Mountain.