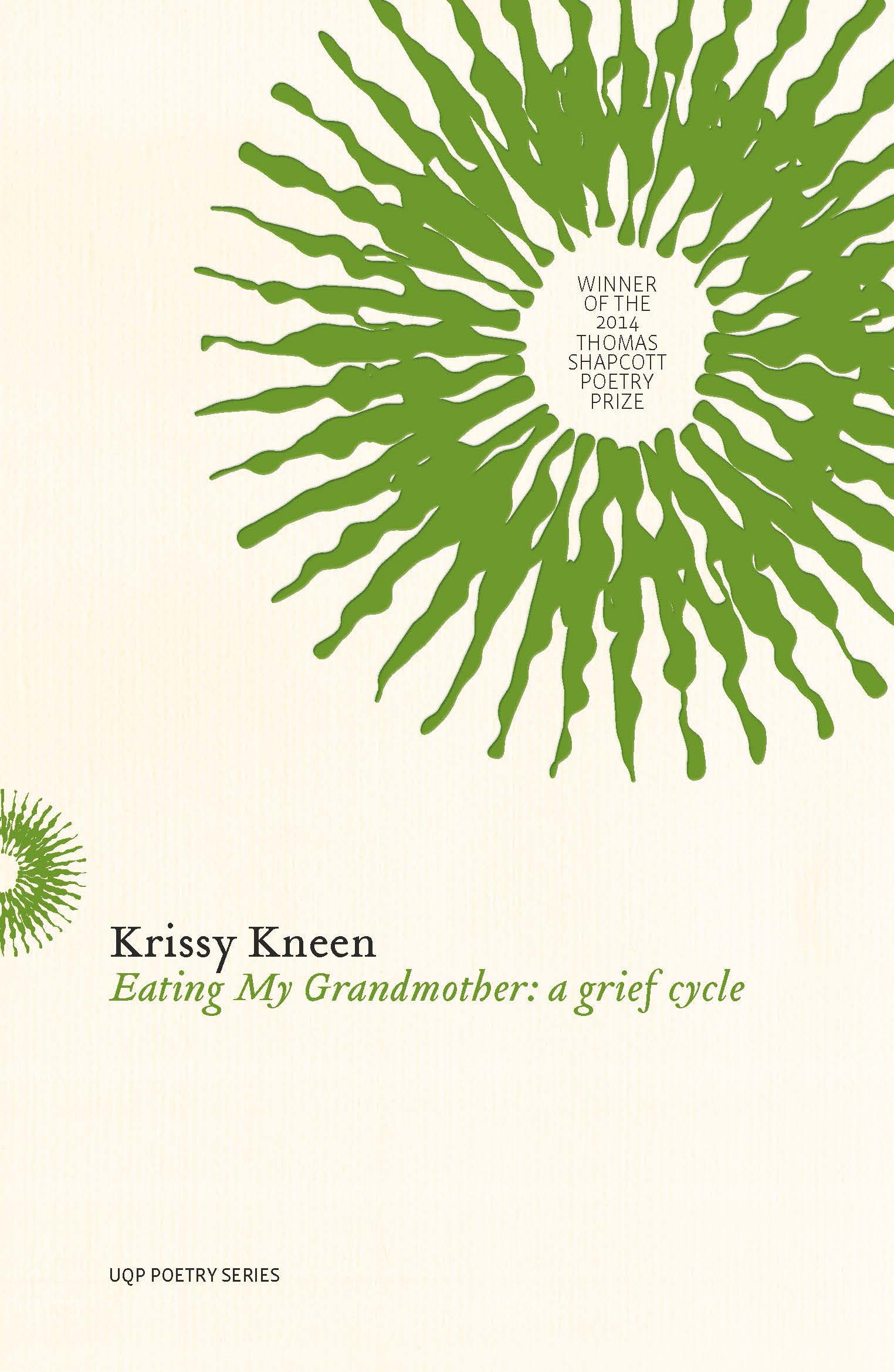 Eating My Grandmother: a grief cycle by Krissy Kneen
UQP, 2015

Eating My Grandmother is the first collection of poems by novelist and short-story writer Krissy Kneen. As its blurb announces, it is a book written out of a sense of necessity: the imperative to record and to make sense of grief. These poems are autobiographical and confessional: their ‘I’ presents itself as the voice of the poet, and a photograph of the poet’s grandmother appears after the last poem. Grief and loss, of course, are some of the most trodden territory in poetry, so the question with any book like this one is: how does this poet find a new way through it? The title, Eating My Grandmother, introduces the physicality of attachment to the deceased which will characterise the rest of the collection. Some of its best poems move between the intangible recollection of the dead and the physicality of the remains. It is, in that regard, a book about types of remembrance, moving between materiality and memory, cremation and cannibalism.

The opening poem initiates the claustrophobia of clinging, willingly and unwillingly, to a lost loved one:

The universality of the experience is both an advantage and a problem; the avoidance of cliché is especially difficult, and in this Eating My Grandmother is not always successful. The first poem has some slightly tired lines (‘Now / in dream. / in breath / in all the painful trudge of days ahead I grow / in grit / in earth / in death’) and the image of the headless chicken, for instance, in the first part of ‘Fugue’ (the following poem) is lazy. This is unfortunate as there are strong lines and images in all of these poems. Poetry as personal and overtly therapeutic as this can be especially difficult for a poet to edit, and a firmer editorial hand was needed at too many points. Related to this is an unwillingness to trust the reader; there is no need to be told at the start of the first poem in the Requiem section that the world is muted ‘because of grief’ (surely we know this by now) or in its seventh part that a rare declaration of love from her grandmother to her mother was ‘a moment of truth’.

Where this book does do distinctive things is mostly in two central concerns: the eating and the grandmother. The character of the grandmother as she emerges is vivid, especially her influence on her immediate family. The poems tell of her migration (‘My grandmother / (mother-aunt) / arrived in England, / opening a suitcase / empty of everything but / a skull / gifted by a doctor.’ (Requiem ix)), her collecting of fairy tales, her emotional distance and fierce temper. The difficulty of the poet’s relationship to her grandmother makes for much that is best in the book and keeps it, in those parts, clear of sentimentality. The physicality of eating recurs through the poems and does several sorts of work: it conveys powerfully the physicality and obsessiveness of grief, while at the same time standing in opposition to the other side of dealing with loss, the apparently disembodied activity of memory, the limited living on in the words of others.

The final poem, ‘Cadenza’, ends the book with a panic attack in a supermarket. The detail of silently falling plastic knives as trigger is well chosen (‘The pointless sound / of nothing / hitting ground / is what breaks me.’) In this ending, and in the movement of the book as a whole, the word ‘cycle’ of the title seems well chosen. It is a book of circles and repetitions rather than of forward motion, and in that it captures the slowness and frustration of grief. Despite the blurb it offers not so much ‘a kaleidoscope’ as obsessive fixity, the combining and recombining of memory.