Review Short: Quinn Eades’s all the beginnings: a queer autobiography of the body 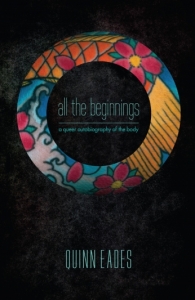 all the beginnings: a queer autobiography of the body by Quinn Eades
Tantanoola, 2016

The world can never be understood in quite the same way after having seen Eades’s ‘body’ written into these pages. It is an intimate connection, sometimes an embracing, but sometimes a turning away from that which feels too exposed but still draws the eye.

I am making the word flesh (this is not a metaphor). I am taking this queer body that has birthed two babies, drunk ink like it’s milk, fucked outrageously in the dawn, drawn scalpels and needles to its arms and wrists, and I am standing it, unapologetically, on this page. It is impossible to be not visible here, and I relish the light. There is no passing. You can’t pretend you haven’t seen.

The author was Karina Quinn and it is the story of a woman’s experience scribed onto her body. Since the writing of the book, the author has transitioned into Quinn Eades. Even this presents a challenge for the reviewer; it’s difficult to avoid using gendered pronouns but I’ve done so as much as possible.

Eades is incredibly generous to the reader, not only with pouring out the ‘self’ in confessional writing but also in using the body’s abject realities as material for creating art. The excremental is the inescapable matter of a life lived truthfully; blood is the ink that writes the poems; scars are overlaid with shining green and gold tattoos; pain forms the line of melody threading it all together.

The author describes all the beginnings as a ‘hybrid text’. Originally written as a PhD project, it meshes autobiographical narrative, theory, reflexive exegesis and poetry into one body of work to be assessed by academics. It is not meant to be experienced as a standard piece of literature but, rather, as something as unique as Eades:

When I interleave genres, and write this body mixed with autobiography mixed with theory, my work is sometimes called fictocritical, but I like a term coined by Caren Kaplan: out-law genre. Out-law because Derrida writes that when we invoke the word ‘genre’ we invoke the Law. There can be no speaking about what’s in, without defining what’s out.

The challenge is to convert this text into something readable for a less scholarly audience. Perhaps not all readers will understand ‘Deleuzoguattarian difference,’ nor many other allusions. However, when this intertextuality is arranged as poetic inclusion, defying conventional forms of reference, it does provoke a more creative engagement with the theoretical.

Another intentional stylistic trope that can be unsettling is the non-linear storytelling, shifting from present to past to future, using repetition for added emphasis.

The arrangement avoids the chronological connectivity that might be expected of an autobiography and it’s easy to get lost. I would have liked more direction – yet getting lost required me to stop reading conventionally, instead going backwards and forwards, rereading sections that resonated, skimming through others, returning with a greater understanding because of what was read in-between.

It is the body Eades tells and not the story, so there is much that goes untold. This makes for some frustrating absences. The greatest clarity comes when the author is writing as a mother such as in ‘Heading North’, a chapter telling his son about Black Saturday:

You were eight weeks old when the Black Saturday fires razed everything they found and in the city we sat in a west-facing weatherboard house in a sticky breastfeeding soup. A fan pushed the heated air around you and you sucked for an hour, and there was so much sweat, it gathered into drops and formed tiny rivulets that formed little pools where our bodies met, and even breathing was hard. Even breathing was hard.

Eades writes that ‘poetry is the connective tissue. It is the thing that pulls us together. It is ‘the bones of this book’ but I count only about a dozen poems, and that makes for very few bones. They do create a space to sit with words that are less crowded, more mellifluous, even when still focused on the abject. ‘Necrosis’ describes an ovarian cyst:

Most of the author’s writing is a seamless movement through ideas, images, and a play of language reminiscent of the writing style of Hélène Cixous (perhaps this fluid prose can be considered the connective poetry), and Eades does enter into an internal dialogue with those writers that wander through her text. Describing the time she was introduced to Cixous’s writing in the classroom:

Hélène, this is how I met you, with your falling, flying text, your demand that I write the ‘imund’, that I write the unclean, with joy, with love. How could I do anything except turn to you, and swoon?

So the autobiography concludes with an account of travelling to Paris to meet with Cixous in person. Eades provides sensual, evocative descriptions of Paris, but the disappointment in Cixous herself is also palpable. What Eades expected is unclear, but clearly it was more than Cixous delivered. The book would have worked better without this unnecessary ‘After(Word)’.

But in a book like this it’s hard to know where to start, where to end. All the beginnings is mind-bending, gender-bending, genre-bending. Just when it seems to be one thing, it shifts and becomes something altogether different.

… writing, creativity, is always about bringing things out, into light. Writing is the dark half of reading: when writing is read it will glint like the inside curl of pearl in a shell, like a found thing shining out from a nest, like the bright moment when light hits the eye and is reflected back, turned around.

The ebb and flow of the text does invite this illuminating reflection, as much into one’s own ontological viewpoints as to the examination of Eades’s queer and colourful body. Far more than an interesting autobiography, it is a transformative journey for both writer and reader, and possibly for the literary world.

This entry was posted in BOOK REVIEWS and tagged Quinn Eades, Roxanne Bodsworth. Bookmark the permalink.
Roxanne Bodsworth (the proper name of the poet published as ‘Therese’) lives on a sheep farm in North East Victoria, is undertaking her PhD at Victoria University, and working as a celebrant in her spare time. Her verse novel, The Tangled Web, was published in 1989 by Openbook Publishers, and her non-fiction book, Sunwyse – celebrating the Wheel of the Year in Australia, in 2003 by Hihorse. Widely published in a range of genres, writing keeps her sane (almost).

One Response to Review Short: Quinn Eades’s all the beginnings: a queer autobiography of the body