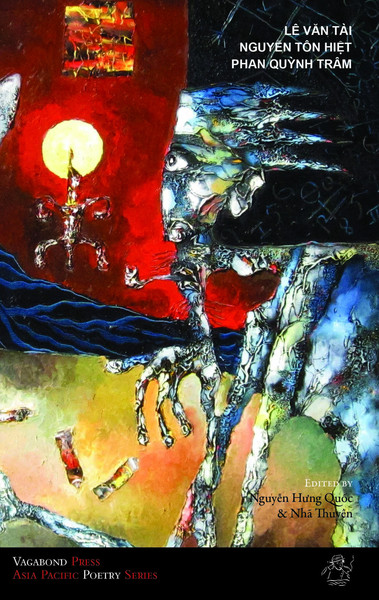 The academic Michael Jacklin who launched the present collection, has written that there is ‘ongoing neglect of literature produced in Australia in languages other than English,’ citing as one example the Australian-based, international journal of Vietnamese writing Tien Ve, which appears to be little known in Australian poetry circles. A small part in the redress of this state of affairs is a recent edition of Vagabond’s series of anthologies of poets from South East Asia. Poems of Lê Văn Tài, Nguyễn Tôn Hiệt & Phan Quỳnh Trâm is the seventh of eight in that series, and differs from each of the others in that its three featured poets are also Australian: Lê Văn Tài and Nguyễn Tôn Hiệt have lived in Australia since the early 1980s (as a part of the refugee movement that occurred at the end of the war), and Phan Quỳnh Trâm emigrated more recently. Each of the poets here is thus marked by the quintessentially modern characteristic of exile, although this comes through in the works to differing degrees and in different ways. As one of the editors, Nguyễn Hưng Quốc, writes in his introduction, the poems of the collection’s most senior poet, Lê Văn Tài, ‘float between Vietnam and Australia.’ For Nguyễn, however, Vietnam and Australia (and Vietnamese and English) appear as more discrete categories, and his poems are usually directed towards contemporary Vietnam. And while Phan’s poems appear to be drawn from city life, the idea of ‘place’ as such hardly figures in her work.

Lê Văn Tài published his first collection in Australia in 1987 (featuring a preface by the late John McLaren) and has published intermittently since. Some of the poems included here – such as the lyric ‘A Man, Lonely Dumb and Free’ – are from this period, making this something of a sampler of his work – one directed towards an English-speaking audience. A far more comprehensive selection consisting of 480 pages, Tho Lê Văn Tài, was published in Vietnamese in 2013. Like fellow emigré poet Philip Hammial, Lê is also a sculptor (and painter); these arts come through in the title of the poem that opens the anthology, ‘The Sun Stopped Wandering on Stretched Canvas’:

In the first line’s repetition the speaker may be lamenting a state of exile, though the ellipsis suggests rumination. The curiously enstranged language of ‘haughtily, a shelter’ mingles with the pre-packaged ‘warm sunny day.’ Alongside a Surrealist influence (one poem bears the title, ‘A cow wears the hat, it was me’), Lê’s poems are often metaphysical and suggestive:

In this selection of eighteen poems, Lê Văn Tài comes across as a poet of drift, air, and earth. Seeds are important in his work, with their capacity to disperse and propagate metaphorically associated with the loneliness of exile, and the desire for belonging (‘Where Can a Seed Take Root?’).

Nguyễn Tôn Hiệt appears more dexterous in style than Lê, switching between a number of different genres and moods. The 31-page selection of fifteen poems contains examples of the political allegory (‘The Child of a Golden Dream’, ‘The Future has been Too Old’, ‘Children after the Midnight Bells’), the dialogue or script (‘Sleeping Overnight Where it’s Dry’ – a dramatisation of strategic evasiveness in the face of authority), the satirical travel guide (‘Things to Remember before Making a Trip Back to Your Native Land’), the list poem (‘A Person is Writing,’ ‘A Hundred Years in the Places of People’), the ‘How to’ or ‘Instructions for’ poem (‘Realisation of an Equation’, ‘Open Heart Letter’), and the ars poetica. Belonging to this last category, ‘Poetry: something pending’ is, for me, one of the best poems of the anthology.

What might be called the project of these poems is a comic, sometimes bitter examination of the homeland from the perspective of the diaspora. Nguyễn’s poetry is often forthright. If Lê is the dreamy Romantic, Nguyễn would be the Augustan. He has things to say, frequently about the Socialist Republic of Vietnam. ‘Omnipresence’ concerns a dream in which the author converses with Donald Barthelme, and ‘Open Heart Letter’ draws on George Orwell’s Animal Farm; Nguyễn’s poetry in this selection can be seen as oriented between the signature forms of these two writers: political allegory and metafiction.

Phan Quỳnh Trâm takes a more ‘everything and nothing’ approach than either of the previous poets’, and words like ‘nothing’, ‘nothingness,’ and ‘silence’ appear several times in the twenty poems published here. Her style switches between the lyrical and the conceptual; the subject matter, or themes, of her poems are primarily music, love, poetry, and indeed love of poetry. This is one of the most in-love-with-poetry poetry collections I have read:

It’s great to tap into the sense that ‘only poetry isn’t shit’ (as one of Bolaño’s radical aesthete characters has it), but these poems sometimes fall back on clichéd formulations. ‘Poems for Rainy Days’ (‘When I feel sophisticated I read Octavio Paz / When I feel like swearing I read Nicanor Parra / When I feel bored I read Collins (Strand also does the job) …’) piques interest as a reading list, but doesn’t suggest much about the poets beyond the value they add to certain emotional states. Phan’s reading tastes are wide, and though US-American references certainly feature (and these are eclectic: John Cage and Frank O’Hara sit alongside Billy Collins) she draws at least as much from Latin American and Eastern European literatures. Hers is an inclusive aesthetic, oriented within a blend of ‘world’ literature; it is much more outward directed than in. No Vietnamese or Australian poets are among the many poets cited. If Phan’s poems possess a characteristic form, this follows the postmodern convention of the flattened list. In this way, her poems find affinities with those of Nguyễn, who also makes use of the catalogue form. But where the structure of his most voluminous list poem is ordered by the alphabet, Phan’s lists are usually more loosely subjective. The exception to this is ‘Variety of a Story,’ which is composed of a list of the first lines of twenty-six books – twenty-five canonical novels and the Bible.

Pages: 1 2
This entry was posted in BOOK REVIEWS and tagged Lê Văn Tài, Nguyễn Hưng Quốc, Nguyễn Tôn Hiệt, Nhã Thuyên, Phan Quỳnh Trâm, Tim Wright. Bookmark the permalink.
Tim Wright currently lives in Melbourne where among other things he reads and writes poems and is researching a thesis to do with contemporary Australian poetry.