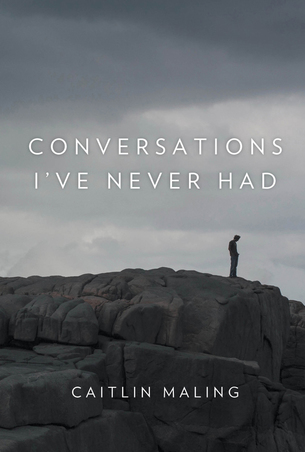 Few writers seem to get the viciousness of Perth. John Mateer’s early poems do, and some of Deborah Robertson’s short stories. There’s also Laurie Duggan’s one-liner, ‘you can see why all the really savage punk bands came from here’ (‘Things to Do in Perth’), and for the encyclopaedic and lyrical, John Kinsella’s wonderful, aptly sprawling ‘Perth Poem’.

Caitlin Maling’s debut collection, Conversations I’ve Never Had appears at first to be almost overwhelmingly concerned with place and places, most often in and around Perth. Yet these are poems of place in a secondary sense: as backdrops to the poet’s central themes of family and suburban rite. Many of the poems appear to have been written while living overseas (North America and the U. K.), and fall into a less-critical tradition – that of the homesick, coastal-dwelling Western Australian’s lament, best rendered in The Triffid’s 1986 album, Born Sandy Devotional. Like the cover image of that album (an aerial photograph of Mandurah in 1961) there is a preference for the topographical perspective in a number of Maling’s poems, which could be partly a result of the distance from which they’re written (that is, from which the places are remembered and evoked), and because the views most residents have of that city, when leaving it or returning after a long time, are from the air. There is, however, more than one rear-view mirror here too – including in the final poem’s somewhat febrile litany of place names, a poem which also contains my favourite line of the book: ‘defenestrating apple cores at 140 kmph’ (‘Directions’).

Maling’s poems ‘report’ from several different Western Australian locations. Even the poems written in the U. K. and the U. S. are usually only about those places insofar as they provide a contrast to the poet’s memories of Perth, and a way of evoking her feelings of dislocation (especially her separation from the beach, a common complaint of Australians overseas). Maling’s evocations of place are thus telescopic rather than ‘on the ground’, heavily marked by the vertigo of memory and homesickness. The poet is not understood to be a seer, nor a detached observer of events, but a presenter of small truths. One influence appears to be narrative fiction, especially the novels and short stories of Tim Winton. A typical move of Maling’s is to posit a window/lens ‘onto’ a memory, sometimes triggered by an observation or encounter in the present, the poem’s effect seeming to lie in the clarity of its focus, the authenticity of its period details, the reader’s approval of its earned truths (e.g. respect for the ocean, the importance of family), and the comparison and contrast of a ‘then’ (adolescence) and a ‘now’ (adulthood). The overall theme of Conversations I’ve Never Had might be something like ‘where I’ve come from and where I’m going’.

I gobbled these poems up on first reading, with the anticipation of hearing about places I’m familiar with. But the book’s Western Australian-ness, its Perthness, soon became cloying. I’m not talking about the city itself here, of which I’m always happy to hear, but certain attitudes towards it. What I mean is the sense (and it is one every major Australian city encourages, through onanistic PR campaigns) of self-satisfaction associated with simply residing somewhere. I am not saying that Maling’s poems endorse this attitude, but that (at least for my tastes) they are perhaps not critical enough of it. Various typical scenes or stages of growing up are covered, and unfortunately the poems often do seem to regard themselves as typical. The back-cover blurb attests to the poems’ rich evocation of place, and their use of the confessional and narrative, all of which would be hard to dispute. However I am less convinced that the writing is ‘restlessly questioning’: often the big question behind a poem is blurred, usually at the end, by a falsely simplifying or resolving image or statement, so that the poet and reader are left looking off into the middle distance, shuffling their feet. Where the poems don’t succeed, to my mind, is where they aren’t inquisitive enough about – are too untroubled by – their metaphors, and their ways of speaking more generally. Specifically, metaphor in the poems too often functions like a safety switch that cuts out the poem’s mode of inquiry just when one wants it to continue.

The book is partitioned into four numbered sections which are roughly chronological, moving from evocations of childhood to poems more inclined to the poet’s present day. What to make of the title? Its form is reminiscent of another negatively-constructed title, Henry Reynolds’ Why Weren’t We Told?, and there is some crossover in Maling’s attempts at facing up to the big question of Aboriginal possession. Maling’s title invites the reader to wonder what those ‘never had’ conversations might be, and hints at the confessional mode that some of the poems will adopt. Yet, this is not the confessional of lithium and psych wards, and Maling’s stories of teenage abandon are mild ones. The confessional mode is also used to approach larger themes, beyond the poet’s own experience. While viewing an exhibition of Aboriginal paintings, Maling writes:

The confessional tone lies in the poet offering up to the reader an acknowledgement of her implication within a system she doesn’t appear to endorse. Yet, this is also an example of the blurry middle-distancing mentioned earlier, where ‘thirst’ is lobbed to the reader as if in consolation for (or a distraction from) its not continuing the inquiry. This poem’s critique is hard to pin down. Are we all equally guilty for relying on the products of that ore, bound for China, to return as parts of Ikea chairs and laptops? Is Maling’s admission of her own implication a defence against criticism? It’s hard to say what her position is because the final line closes the questioning down with a metaphor that anchors the poem’s meaning to the personal rather than the social. This tendency to seal off the poem with a metaphor occurs frequently in the collection. I found myself more interested in those poems where this tendency is avoided (‘Donnelly River, 13’, ‘Concessional: Cassandra to Helen’, ‘Hector’, ‘How I spent my 18th year’), or in which the rigid reliance on the single explanatory metaphor, and the misty presentation of the value of family and the ocean, are broken away from.

A statement-of-fact tone to the writing invites scepticism. At one point, in a passage delaing with the question of belonging, Maling writes that her family, ‘goes back as far as this country lets us’. It appears that a sense of belonging – a desire to belong – is being suggested, while a limitation to this, an impasse, is also acknowledged. However, the word ‘let’ in that line is puzzling: how exactly does a country ‘let’ a generational line go back further, or prevent it from doing so? It seems as if a central question to Maling’s poetry and poetics is touched on here and simultaneously obscured. Similarly, the poem ‘Things we learn from our father’ invites scepticism for assuming the reader’s agreement with its central thesis (that we all had fathers, that those fathers instilled in us self-reliance, and so on), rather than simply allowing itself to be a poem about the poet’s own specific experience. In the poem ‘Things I missed about Cervantes while in Cambridge’, Maling writes of the latter town, ‘here I’m lost within the wealth of history’ and opposes its ‘tales embedded in each brick’ to ‘the simple honesty of the ocean’ in Australia. The ‘historical/not historical’ opposition presented here is an exhausted one (one could just as easily reverse the qualities), and clashes with more nuanced attempts at historical thinking in other poems.

Pages: 1 2
This entry was posted in BOOK REVIEWS and tagged Caitlin Maling, Tim Wright. Bookmark the permalink.
Tim Wright currently lives in Melbourne where among other things he reads and writes poems and is researching a thesis to do with contemporary Australian poetry.