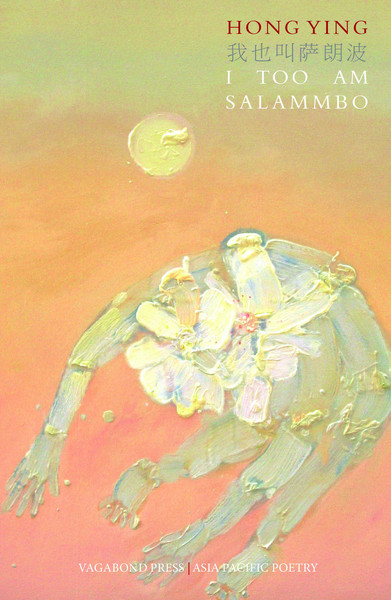 I Too Am Salammbo by Hong Ying
Translated by Mabel Lee
Vagabond Press, 2015

Hong Ying’s I Too Am Salammbo is a selection of poems from 1990-2012, based on a Chinese selection published in 2014. Though almost all the poems contain conceptual, or imagistic, interest (bar some of the ‘city’ poems: ‘Berlin’, ‘London’, etc.), the formal repetition gets a bit wearing.

The collection’s translator, Mabel Lee, uses spacing as caesurae to evoke the possibility of Chinese characters for phrases like ‘moss attracts moss’ (‘Ascending the Mountain’) and ‘painting otters’ (‘Otters’). These are just one kind of moment that happens: many of the poems are far from being as sweetly picturesque, pointing instead to family and sexual trouble, and sometimes both together:

The use of spacing is effective in aiding line readability. While sometimes it provides merely a slowing down of the line, at others, where the shift in sense between the two phrases is more disjunctive, the effect is one of montage, referring to text, feeling, memory, metaphor:

The concise poem ‘Destruction’ creates its own casket with spacing that might allow exit or entry:

Lee’s critical introduction surmises biographical scenes behind Hong Ying’s poems, particularly in relation to family and men; I think I would have preferred to know less of Hong Ying’s life, or to read about it after reading the poems.

In rereading, however, their very strangeness opens up to meanings beyond the personal. The second and third poems of the book’s first section (the first facing pair), ‘Dusk’ and ‘Fortune Teller’s Dance’ move deftly from a seemingly hopeless immersion in death to a paradoxical, universal vision of new life:

As we know from the introduction, Hong Ying lived on the Yangtze River as a child; images of fish and river recur in the poems. These can be affirming, as in the quote above, or contemptuous, as in the following, which shows greater identification with the cat than the fish:

There is a strong relation to the nonhuman animal in these poems: ‘Copying a weasel I stand in the rain knocking doors’ (‘Night in a Small Town’); ‘Gulls in flocks nestle in the hull/Panting as they bend over me’ (‘In Pursuit’). The most powerful for me, recalling Ned Kelly at fifteen (‘every one looks on me/ like at black snake’ from the ‘Babington Letter’) is ‘Among New People’, a worldly allegory:

Hong Ying’s distinct relationality extends to objects, such as the dish of ‘Early Morning’, and the photos of the ‘you’ that the narrator eats in ‘The Story of You and Me’; and also to trees:

Pages: 1 2
This entry was posted in BOOK REVIEWS and tagged Hong Ying, Mabel Lee, michael farrell. Bookmark the permalink.
Michael Farrell's I Love Poetry and A Lyrebird: Selected Poems are both out this year (2017): from Giramondo and Blazevox, respectively. His scholarly book, Writing Australian Unsettlement: Modes of Poetic Invention 1796-1945, was published by Palgrave Macmillan.