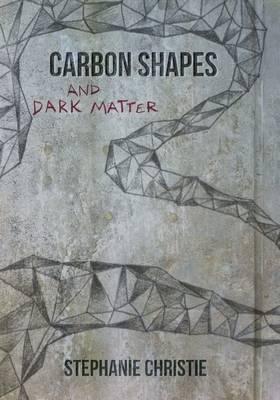 In Stephanie Christie’s first collection, Luce Cannon (2007, as Will Christie), language is a fissile material, words are rendered particulate, unstable, always threatening to devolve into their component parts. And while its subject matter is, often, not what you would call exactly bright, its tone is also not sombre, language tumbles along with a kind of free fall intelligence:

Her second collection, The Facts of Light, was published as part of Vagabond’s deciBel series edited by Pam Brown, in 2014. This book continued certain elements of her previous poetry, but also saw a break in style, its poems assuming a more regular stanzaic form.

Her third collection, Carbon Shapes and Dark Matter (2015), may represent a more comprehensive merging of the two modes. As with The Facts of Light, there are lines of around five-to-ten words, and these are grouped into stanza-like formations; but concurrently there is Christie’s unusual cantilevered spacing, rapid switches in tone, puns, use of paradox, and characteristic word-grafting. In the latter modes, Christie’s poems are wonderful heterogenising machines: breaking words open to reveal their internal differences, recombining them with others (‘We simplicate things so much’ (‘The Old Story’)), making allusions (see, for example, the eighties/nineties song titles buried in the poem ‘Hung r’). The first, isolated word of the collection is the amalgam, ‘strugglue’, and indeed this insight into the somewhat sticky, glue-like nature of ‘struggle’ percolates through the book. Struggle involves time, and like time it can both flow and harden up or congeal. The reader is left with the sense of Christie’s respect both for personal resolve, and for vulnerability:

The knowledge that we are living in an epoch of climate change is one that rarely leaves these poems, and it follows that a current of anxiety runs through the book, along with a desire to find ways to think, feel, and love in light of that knowledge, and a reckoning of the capacities of hope. It is a curious characteristic of this book that the weighty descriptions of the previous sentence co-exist with Christie’s ebullient language: these are not poems that seem to map out a certain idea and then follow it through, but are always moving and shifting.

This reader must now admit to being at first disappointed that Carbon Shapes was not as immediately visually exciting as the earlier Luce Cannon. It was not until I heard an audio recording of a reading given by Christie that I began to understand what the poems were doing in their own right. Christie’s precise renditions of the poems brought across the highly tensile nature of the work as a whole, and attuned me to the more subtle level of experiment going on in the collection:

Modulations of tone occur line by line: from the apparently sincere statement, to ambiguous wordplay (the mind ‘out of its debt’; logically this suggests ‘freedom’, though sounds like something quite different), to, one assumes, a kind of ironic sarcasm (‘an empire and a safe bed’), to paradoxical fact. In her book Ugly Feelings, Sianne Ngai refers to tone as, ‘the affective “comportment” of a literary text’. The rapidly changing nature of tone – that conventionally worded statements of feeling are neighbour to Joycean neologisms and word-splicings – might be one mark of the tone of Carbon Shapes; that’s to say, it stably evokes a mood of instability. While not confessional, there is a sharp clarity (and dry humour) to its reports of extreme states:

The theme of climate change runs alongside frequent references to elements of Christianity, specifically Protestantism, to which the poet seems to have a complex relationship. Words such as ‘prayer’, ‘God’, ‘heaven’, and ‘redemption’ appear, usually accompanied by a measure of ironic distance: ‘God’s love is the heavy black mass / in the brain that helps us sleep’ (‘Parachute’); ‘As fast as we chase it, redemption keeps / the same distance away’ (‘Clod’). In ‘Parachute’, again, we read: ‘Each day, the extra light fills us / with a worn hope’. The last two words read as richly suggestive about the utility of hope in regard to climate change, or indeed to the political change necessary to avert catastrophe.

The eternal themes of love and loss, and sadness, are found throughout Carbon Shapes, while a kind of everyday violence and fear flickers at the edges of many of the poems. This is a collection of many brilliant lines (‘Lust stutters in the blood’ (‘Post-protest/ant’); ‘Intense moderation’s hypnotic’ (‘Clod’)), and for this reader, Christie is one of the most exciting poets writing today in Aotearoa/New Zealand.

This entry was posted in BOOK REVIEWS and tagged Stephanie Christie, Tim Wright. Bookmark the permalink.
Tim Wright currently lives in Melbourne where among other things he reads and writes poems and is researching a thesis to do with contemporary Australian poetry.