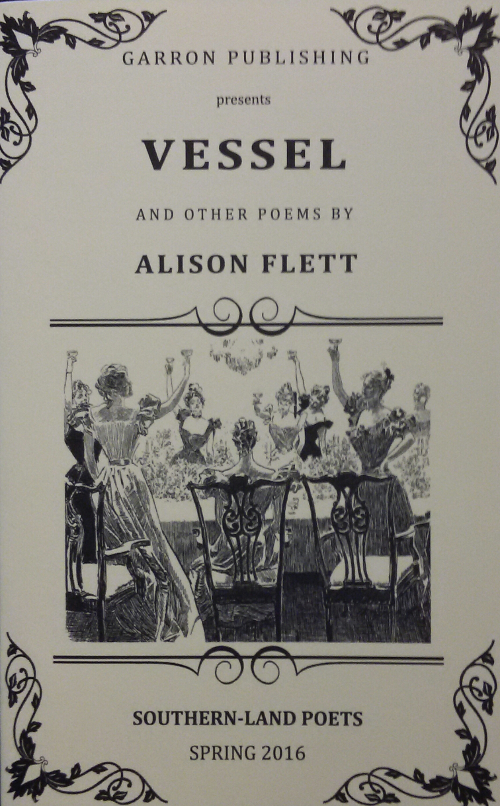 The Martyrdom of Bees by Louise McKenna
Garron Publishing, 2016

Louise McKenna’s revelations of immanence in her titular poem, ‘The Martyrdom of Bees’, are subtle, precise and filled with a ‘deafening silence / as if the whole world tilts on the brink of loss’ (II). Composed of three distinct sections, McKenna’s prologue quote depicts the self-sacrificial nature of the bee to ‘protect the nest’ and the sequenced Passion of Christ narrative is split between the three sections (arrest, trial and suffering). Part one begins:

This initial aphoristic couplet is suspended by the anthropomorphic possibilities in the ‘her’ and ‘him’; the subsequent stanzas concentrate on the physicality of the turbulent, mimetic world of bees. There’s a swift modulation between human and animal drives before the ‘her’ is resolved to the animalistic, as ‘she alights upon his arm, testing for sweetness / on the inside of it’. This double voice resonates between the three sections as part two establishes the masterful power ‘bees’ possess within this para-anthropocentric world:

Undergoing a perspectival shift to the human, the ‘martyrdom’ the bees embody becomes the inner experience of a modern man who, disregarding the ‘stylus / forcing its message’ and being hallowed of the bees ‘etiquette, / their lessons in humanity’, is doomed to be crowned ‘queen of a desolate queendom’. In part three, the martyr-bees are rendered as a perfect metaphor of humanity’s inner turbulence; this metaphor serves as a loose meditation upon the transience of life and imminence of death. Indeed, the suffering the bees experience at the hands of ‘aerosol venom’ is dual, as McKenna illustrates in the opening line and closing line: ‘Sometimes death is a mist the cell drinks’, and ‘Tonight I dream I am Dali’s wife, naked / beneath airborne tigresses, poised to kill’.

Lost Property adheres to familiar themes of nostalgia and loss, however it is Dally’s meticulous typesetting and spatial-organisation on the page that sets the two collections apart. Take for instance, Dally’s ‘My Mother Dreams’, a vision of mortality impeccably realised through the mundane:

These disconnections articulate, spatially and typographically, an understanding that our visceral experience of reality (the lines at the margin) is contingent upon a cerebral counterpart (made manifest by the repeating ‘or’ conjunctions), as the final two stanzas conclude:

In a sense, one feels like Orpheus looking back on Eurydice knowing that if we look too long ‘it will be — / careless, forgetful me —/ who loses / her mother’ (‘Lost Property’). At the same time, Dally demonstrates that by not looking back we become the ‘Lost Property’, our reality simply a placeholder for death:

In a similar vein, Alison Flett’s Vessel is concerned with departure and revival. The opening poem an embodiment into metaphysical geography, tracing the ‘Vessel’’s departure into time, the ‘hollow                   gaps                   at the surface’ of reality, and peering past ‘CEMETARY SONGS’ to ‘Arrival’ at the beginning again:

This establishing line is a synthesis of juxtaposing modes, nostalgia and present, the narrative focused on the existential:

Accordingly, the following poem, ‘Vessel II’, traces trajectories of ubi sunt (‘will she remember / where she was / before // she was born’ (‘Vessel II’)) and transform the mundane into memento mori:

The after images of the cup taking on a second-life:

‘It seems a thing of itself / a thing that appears / and disappears’, mediating and obstructing reality as a shadow that is always in the peripheral of Flett’s ‘Vessel’ – the splintered fragments of the broken cup oscillate between the ‘fore’ and the ‘after’ of the object. This equivocation of mise en abyme is transfixing and dually destabilising as Flett continually moves between the discontinuities and splintered traces of words. Perhaps best envisioned in her eponymous poem sequence, each half/third is its own absolute entity:

These individual collections are a ‘balance of substance & space’ (‘Vessel II’, by Flett), reflections of the same reality shifting between experiences and perspectives. Such a series cannot be perceived alone; it is the whole and not the sum of its parts, to paraphrase Aristotle, that fantastically revises and reformulates aspects of the human condition to determine whatever text the reader experiences first,