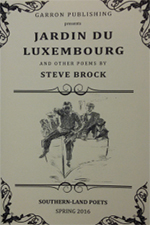 Selfish Bastards and Other Poems by Mike Hopkins
Garron Publishing, 2016

Displaying an impulse that is communitarian and geographic by turns, Mike Hopkins’s Selfish Bastards and Other Poems, and Steve Brock’s Jardin du Luxembourg and Other Poems address the quotidian of the present under the notion that place-based does not necessarily mean place-bound. Brock’s itinerary darts from France to Barcelona, Madrid to San Francisco, to arrival at the Hollywood hotel, taking readers beyond the physical boundaries traditionally ascribed to place and ‘on a walking tour / a literary one’. However, as much as these poems depend upon travels and traversals, Brock as our guide takes us through scenes and sets that reinforce our ‘role here / is confined to that of tourist / as much as we try and walk like locals’ (‘Jardin du Luxembourg 2’). Hopkins’ collection, conversely, unfolds in a specific place, articulating a contemporary critique of the Australian present. The poems are inflected with the volatility of political lyricism in ‘Selfish Bastards’ and ‘Anzacery1’, and Hopkins’ ‘In the Beginning was the Cliché’ terrifically probes and parodies popular culture.

Upon reading Steve Brock’s Jardin du Luxembourg, you might say that the collection is a miniature epic of wanderers; it can be read as a quest book – except Brock is adamant that the trip is its own goal:

Undoubtedly, one could easily focus on a single poem in Brock’s collection and be done with it, but such a disregard for the complexities and diaspora within this collection would carelessly overlook how these poems serve as affective sites rather than fixed locations on a map. Brock beckons us not to focus on our ‘roots’ while ignoring the routes that made the journey possible, but observe the interactive motion and turbulence that remains in our minds long after the camera has stopped rolling, as in the titular poem:

The interrupted syntax and enjambment gives the collection a terseness meant to convey immediacy without drama. Notational and observed, the poems seem to manifest seamlessly into the next. Indeed, Brock’s metaphor for this process of traversal could be considered ‘Jardin du Luxembourg’, the convergence of French and English in a single garden, the various statues contained within an apt representation of intercultural exchange.

As the ‘I’ recedes and the ‘we’ becomes more prominent in the poem, one gets a deep sense that the language alone possesses the power to bypass ‘the cultural faux pas and mis-readings’ of traversing multiple places. Fraught with predicates that ‘realise’, ‘think’, ‘look’, ‘wonder’ and ‘recognise’ that too much of our attention is based on the location of culture and too little on the displacement of culture:

From one side of the world to another, Mike Hopkins’s Selfish Bastards places his truth within the perception of Australia’s political stage. This truth can compete in the public arena with the ‘truth’ that is portrayed by politicians, such as:

Perhaps veering towards the overtly casual, the title poem might translate less well to a wider audience than others. However, as has been part of recent debate and scholarship, ‘Bastard’ is now part of the Australian vernacular and apparently yelling expletives in a public forum no longer constitutes offensive language. Being free from the same existential competition that obligates politicians to indulge their constituent public, Hopkin’s doesn’t flatter and indulge his audience in the eponymous slam poem:

Rather, the poem performs in front of the reader’s eyes, the musicality of the concluding refrains unpacking the realities of our monotone and formulaic reality:

Indeed, Selfish Bastards signals a condemnation of contemporary society. Reinforced in ‘The Template’ and ‘In the Beginning was the Cliché’, we are confronted with thick hectic prose, sentence fragments and the hackneyed that has taken ‘the world by storm, though it was a small world, when all is said and done’. These clichés humorously gain momentum in ‘In the Beginning was the Cliché’, as the people ‘did not stay glued / to the one true cliché’ but ‘ took to false clichés like ducks to water’. In ‘The Template’ Hopkins satirises the public treatment of our magazine society and paper-politicians:

Structured like a traditional newspaper spread in two columns side by side, such portrayals are confrontational to the say the least, but there is also a sense of warning that is conspicuous here. Hopkins, in similar tonality to Brock’s ‘Hollywood Hotel’, takes an itinerary of the cookie-cutter Australian media and divisive political scene:

The words ‘cliché’ and ‘template’ are key here. The tired terminology is fixed in repetition, an endless ventriloquy hovering over texts, criticising and energising in turn. The geographic impulses that these texts address is one of renewal, the language resonating with a precise duplicity that recognises regardless of the place, we encounter distance, we are always a tourist on the outskirts of a template, political, humorous or based in the explorative: