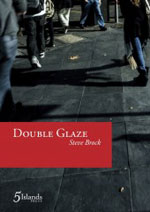 And Soon There’s a Density to Things …

In his most recent collection, Double Glaze, Steve Brock moves the orderly reader from the very public realm of ‘Work’, via ‘The Commute’, to dwell with ‘Writing’ and finally to settle in, arguably the most intimate of registers, ‘Family’. Although poetic work rarely arrives in convenient clusters, a poet’s choice in manuscript arrangement is not arbitrary; it intimates the conceptual webbing informing the collection’s central aesthetic, thematic, and in this case, socio-political, preoccupations.

The image offered in the volume’s title itself immediately piques the reader’s awareness of the insidious consequences of a too-zealous drive for comfort and predictability, namely the potential for isolation – from temperature, from noise, from weather and other people. The collection could be read as a rumination on the way we negotiate between Gesellschaft and Gemeinschaft – from public society to our intimate communities – and the benevolent contaminations that occur between the two.

For example, the streets of Brock’s Adelaide, at once fickle and dangerous (‘a night’s takings’, p. 12) also constitute a wild, open space of possibility, antidotes to the hum-drum of full-time work and financial pressures, as well as a fecund space to reflect on difference and to catch glimpses of fragility – ‘his arm outstretched / like the hand of a broken clock’ (‘lunch hour’, p. 34). For Brock’s narrators, ‘work’ and the commuting it requires, oblige and constrain, but also allow for collisions: with the city, with fellow earners, with chance instances of grace and pathos (‘small change’, p. 35; ‘some other city’, p. 37).

Essentially asking questions about the ethics of living together, the poetic voice here empathises and critiques, indulging some nostalgia but also watching assiduously (‘wheels’, p. 38). The section titled ‘Writing’ begins with the humorously abject ‘the day I dropped Creeley’ (p. 51) – into the loo, that is – suggesting that Brock’s poetic is something to accompany ordinary life and able to include the ugly and accidental. However, some pages later in ‘so what’ (p. 59) a lineage of big figures and their works set within a contemporary enclave (homosocial here) paint the solace offered by shared cultural capitals: ‘a writer / creates his own / precursors (Borges)’, p. 60). Here, the longing to evade certain spatio-temporal impoverishments – via identification, belonging and self-creation in the artistic milieu – reveals the excluding logics of certain strains of ‘freedom’.

Brock’s voices regularly articulate experiences of men from various class backgrounds within a neo-liberal landscape – their frustrations, practices and the particular ways their bodies are exploited. The scaffolder who gets away from Roxby (‘no country for young men’ p.17) is a poignant reminder of the vulnerability of working-class men, used as grist for the mill of mining and mega-business, and seduced by the shiny pittance offered them in exchange for years of health and time with family.

Brock’s female characters, on the other hand, materialise like luminous islands in the battering swells of absurd routines and the brutalising necessities of city surviving, pointing out the beauty that was there all along or indeed embodying it – ‘a wife / some crazy god / painted in a moment / of genius’, p.44 or ‘my wife says / look at the stars’, (p.63). The final section ‘Family’ is a far from sentimental rumination. Here Brock insists on presenting this private institution as simultaneously a haven of saneness and joy, as well as a potential site of betrayal and concealed violence. ‘the stranger’ (p. 81) offers a damning portrait of the lengths to which misogyny will go to cover its traces, with the narrator making the small but reliable intervention, into its calculated regime, of naming and noting.

Consistent throughout this collection is a genuinely dual questioning of how to live (that is, survive) and of how to live (that is, court poetic sensibility and satisfying relations with humans and the world). Brock’s aesthetics seem to refuse a certain kind of preciousness, preferring a flat, casual vernacular that might seem untended (and could risk sliding there). Yet Brock, in certain moments, pulls off the unwavering ‘thus’-ness for which we go to poetry in the first place. One of the final poems of the collection, and one of its most understated – ‘diggers’ – ends with a deft and tender snip: ‘I find another soldier / & imagine the scale / of the boy’s battle’ (p.79-80).

This is an unpretentious collection interrogating quandaries of import. Mostly welcoming and straight, it does not patronise its audience by offering any glib solutions. The solution in the universe of Double Glaze seems to be the humble but mighty combination of poetry (trying to remain a person who can make it and be moved by it) and the people we love.

This entry was posted in BOOK REVIEWS and tagged Antonia Pont, Steve Brock. Bookmark the permalink.
Antonia Pont writes, reads and practises yoga on unceded Aboriginal land. She works at Deakin University and in 2019 You Will Not Know In Advance What You'll Feel appeared with Rabbit Poets Series, and in 2021, A Philosophy of Practising with Deleuze's Difference and Repetition was published by Edinburgh University Press. Other work can be found in places such as Literary Hub, Antithesis, APJ, Cordite, TEXT, The Lifted Brow and Rabbit.