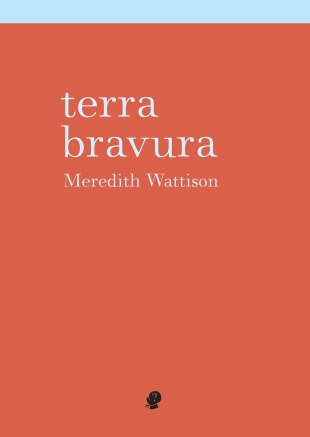 All The Precious, Broken Things Thrown In

I am reluctant to divulge for how long I deferred reviewing Meredith Wattison’s Terra Bravura. It languished with me during the later months of the first half of 2015, then, as I left the country in late June it joined the other analogue reads in my suitcase. Before my departure, I’d plunged in, but was unable to assemble for myself a sense of the individual poems and their relation, with the purpose, of course, of saying something about them that would do the work justice. Like a stern and observant child, the work insisted on a ‘doing justice’. Perhaps rather than opinions, what was gathering for me was a series of unrepresentables; atmospheres.

When I took it up again gingerly, on a thinly-sunned morning not far from an Austrian glacier, in a valley town upholstered with clouds (an apt national setting for reading this work, given its movement between Australia and a mid-20th century Europe), I finally had the gumption to linger on the contents page and also to flip to the volume’s end. Suddenly I noticed the obvious – that the work uses the convention of the poems’ first lines as place markers (title may be too strong a word here). I also found myself reading ‘CONTENTS’ as a kind of poem in itself: ‘We have had a tropical downpour/The cool, dark bank/The steps towards construction/Hush, a naked bear’, as if confirming Wattison’s easy proficiency in word play and allusion, the agility of her compositions.

In the final pages of the book, I found what I’d needed to discover all along – the poem ‘To Allen Fisher re “6 pages from Sputtor” YF#7’. Partly in the form of a letter, this is the key to the work‘s skeleton, if not to the pleasure of its poems. This applies especially to the later ones, for the collection appears to muster more concentration as it goes along, and thus pleasure prevails wherever one dives in. Perhaps, however, ‘To Allen Fisher’ gives access to an attitude that might stitch the work of reading together. The poem also confirmed my initial impressions that Terra Bravura might be a kind of private address (to David Musgrave, as it turns out, in its inception). One has a sense of eavesdropping when reading its first third or so in the sense of not being actively included in a conversation. I was working very hard to keep all the strands together. Depending on one’s proclivities, this can work against the volume’s appeal. For me, this impression was cumulative, not located in any one poem, and often concerned an indeterminacy in relation to setting or to referent more generally. I didn’t know where I, or the narrative voice, was. (When we correspond with close people, they usually already know where we are and of whom we are talking. This skimping on explicitness gives intimacy its smug sheen.) Of course, poetry doesn’t have to tell coherent stories, nor deploy the device of character transparently. Wattison’s collection, however, seemed to have stories to tell, and I was left feeling as if it was perhaps just ambivalent about telling them to me.

Sitting on a Tyrolean wooden balcony, staring out over an obscenely green lawn dotted with the building-block-yellow of a flock of closed umbrellas, it seemed finally marvellous that my experience of deferral, of not wanting to embark, was actually an affect inherent to the volume’s own genesis. Wattison writes frankly:

I had lost faith in it and its relevance. I developed a fear of finishing it and letting it go, even looking at the manuscript was difficult and I avoided it. In late January the publisher’s (David’s) call came, too urgent, and I risked the project’s demise as I refused and failed to produce the manuscript. He gave me more time; the deadline was now June.

What had seemed my own, arbitrary inability to enter the work now appeared as the very timbre evoked by an engagement with it. Wattison’s inclusion of this account of process in the work itself provoked my engagement. Delay, as movement, tends to evade articulation. Its rhythm (which can strike us as the absence of rhythm), like the real ‘content’ of poetry, sits in a register aside from that of thick, noisy nouns. To say hesitation’s mood already signals a sensibility for that which nouns occlude. Deferral became for me here something to watch, as Wattison had done, rather than to lament.

I speculate that the labour of birthing this work, heavy with ‘family lore’, with the acridness of remembering what isn’t one’s own, but also one’s own, was already enough, already exhausting enough, that the poet left some of the work of finding a path through the poems – their narrative or aesthetic arc, their themes – to the reader. This is risky, since the reader may give up. The obligated reviewer, however, can’t and so lingers and meanders long enough to encounter the knots of motifs and their réprises (swans, buttons, amber, foxes, Dupain … undsoweiter, as the Germans would say), and coagulations of stories with their persistent characters. It is a kind of mining that is rewarding – mind, the grandfather, William, was a miner. Numerous singular poems arrest the reader, such as ‘I find my grandfather‘s invitations’, ‘They say, family lore’, ‘In this cheerful mausoleum’ and ‘I comment on the ginger flowering freesias’, in which the setting is stable, the subject clarified and the poetics practised. We read in the latter:

The poem rolls off the reader’s tongue as if Wattison is talking it. A different kind of cleverness is in play here. I can waft about with the opacity of what ‘conspires from his sleeves’ because afterwards there is the rigour of ‘a bucket of sand’, the persistent internal rhymes on ‘ah’ and ‘ire/igh’ and the sonorous snippet of an invocation, in the mother tongue of the culture that skulks behind so many of the poems. To this celebration, the reader is invited. The ‘lawn sprinkler’s bower’ leaves me wistful, and I immediately feel heat, prickles, and the stickiness of icy poles.

More contemporary, ‘The summation of parts’ and ‘On my pine kitchen table’ offer, respectively, a cornucopia of nostalgia and grief, and tender, sad wordplay: ‘“Here”, my father said, “take some/awkwards with you;/from the awkward house.”’ The ‘awkwards’ are orchids (from orkhis, testicle), an elderly man’s wry offerings to women who leave. We meet the father over and over, although sometimes it’s left unclear that we are meeting him. Whether this is intriguing or frustrating may depend on the reader’s taste, and on that which they’re seeking in the work (of reading).

This is a collection about awkward, sometimes brutal, houses; about Nation as house; enduring political shame as house; family history as house; friendship as house; memory as house. Flawed houses all. Wattison, however, seems to demonstrate that the labour of saying is the most reliable shelter for the poet, who – if she cannot stop the howling of the past – can at least shield herself from its batterings, if the deftest most balletic words can be found. There is, in this way, either something too clever, or too intimate about certain turns of expression in certain tracks of this collection for me. Feeling un-addressed, I veered off at times. For example, the poem ‘The elephant enters the grey-leathered room’, with its witty set-up, left me too unsure for too long about its object or that it had numerous objects. One assumes a dear male relative is its focus and yet this likelihood wavers. Perhaps making it clear would upset the poem’s aesthetics, tone or other – and yet, I suspect I would have worked less, and been more enthralled, with that clarified. Nonetheless, it does contain the beautiful line, ‘The glacial speed of honeycomb’, and given my own proximity to the vulnerability of glaciers, I was moved.

It’s obvious, then, that Wattison knows how to straight talk to devastating effect, and also to construct devastating characters, like the ubiquitous and sadistic Martha (Johanna). Examples such as: ‘confetti of road crows chroming a black storm’; and, ‘Lips have the give of apricots’; ‘Her feet drip-rhythmic and pacing./She is angry between her toes’; or the almost unbearable, ‘Johanna furnished their houses,/began and shaped every conversation,/tied the children in bags,/suspended and beat them.’

Pages: 1 2
This entry was posted in BOOK REVIEWS and tagged Antonia Pont, Meredith Wattison. Bookmark the permalink.
Antonia Pont writes, reads and practises yoga on unceded Aboriginal land. She works at Deakin University and in 2019 You Will Not Know In Advance What You'll Feel appeared with Rabbit Poets Series, and in 2021, A Philosophy of Practising with Deleuze's Difference and Repetition was published by Edinburgh University Press. Other work can be found in places such as Literary Hub, Antithesis, APJ, Cordite, TEXT, The Lifted Brow and Rabbit.