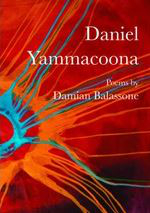 The first three poems in Damian Balassone’s Daniel Yammacoona are about women who have been left by men. In each case the man appears to be the hero of the story, yet the woman is not necessarily unheroic; in at least two of the poems the heroism is one of steadfastness. Women are in a place – Fiji; Nimbin; Pisa. Men take flight:

Through the next four poems Daniel Yammacoona moves from the northern plains of Dakota to the sea, submerges into it, then resurfaces at the Iraqi port of Basra. The narrator of the first of these poems is a bison; another lonely, nostalgic male – ‘of all the kings that roamed the earth / I’m now the only one.’ The narrator of the third is a stonefish – solitary, battle-hardened and violently territorial. The poems move at a rapid pace and it is a considerable accomplishment for a poet to traverse oceans so deftly (departing Basra, the next poem takes place in Fiji) while also being able to speak as a stonefish, a ‘stagnant stone’.

In Daniel Yammacoona, Balassone relates a modern dreaming in an archaic colonial form. His forms are the forms of Mulga Bill, M’Dougal or TISM. There is an over-arching impossibility throughout his work, as the ninth poem in the book, a fairy tale, depicts – a man, a shell collector, leaves the sea for the mountains. The sea, left behind in a nostalgic rage, ceases production of shells and begins spewing forth weeds, glass and poisonous fish. For the tenth and eleventh poems, Balassone sets up a series of dichotomies, asking which side is of higher value: the atheist v the believer; the artist v the accountant; the sportsman v the scientist (an opposition represented at one point via a phallic joke, ‘Darwin’s worm or Tiger’s club: / which one do we prize?’). In poem twelve Balassone’s words colonise a monumental phallic structure – he speaks as a lighthouse. ‘I light the dark with loving eye’. Again it is a lonesome cock – the sailors it speaks to find it unfathomable and drown themselves regardless.

The masculine, fixed in place, assumes a queerness. Unable to leave, man is a dangerous territory. Violence is near. The poetry appears to proffer that there is no masculine or feminine, only the in place and the placeless. Both dream of each other. The in place is at risk of being violated. It sets up defences. Passing through any territory, the placeless takes its life in its hands.

In the title poem, Balassone invents a world; a folk tradition for the people that inhabit that world; place names (Mapunji, Cunjiwindi, Gun-Jalah) and songs belonging to those places. Daniel Yammacoona, a young football player, is the epic hero of the tradition. He seems to be some sort of post-colonial force attempting to bust the colonial form of the poem. It is as though Ballasone’s poetry fights against itself – content a combatant to its form – with content on the ideological left, and form an imperial pig.

Or later in the book, speaking as a Bison:

At times the left gives way to the right and becomes indistinguishable from it:

In ‘The young man at the bus stop’ little rifts appear in the defences of the right. The rhyming of the words cane and crop sets off a series of meaning switches:

What was the young man feeling when he felt the cane? A crop? The cane? The crop? A cane crop? It could even be his cock – his father has undoubtedly, subsequently castrated him (‘his father labelled him the fool / and said that he deserved the pain’). A girl, Rosa was some part of the trouble. In the poem she is never anything more than a face, a teary blur. She is a memory that is closely associated with the young man’s scar.

Here there’s a reference to the Roberto Bolaño novel, Distant Star, in which a poet writes poems as a skywriter over Santiago. Storms blur his texts, an attribute of the form the skywriter’s using. The next noun in the poem is a name, Rosa. Amalfitano’s daughter. The young man at the bus stop could be Jordi Carrera. In Bolaño’s Woes of a True Policeman, Rosa leaves Jordi behind in Madrid as she travels with her father to Mexico. Referentially, Rosa goes from being a painful yet insubstantial memory – the once in place now setting out. In the longfellow epic, Evangeline, expelled from Acadia, travels in search of her beloved. In ‘When the School Bell Chimed’, Damian Balassone has Evangeline seducing the poem’s narrator:

Eyes, hair, nose, cheeks – never anything more than a face – Evangeline struggles for substantiality, in the end disappearing into shadow: ‘soon enough our silhouettes / were locked in a synchronised dream.’

At the end of ‘Daniel Yammacoona’, the mother, who has given up her own childhood dreams to raise Daniel, is left on the plain, ‘almost out of sight, / shining like a morning star, / bathed in beams of light.’ Those that have left are nostalgic for the places left. Those who remain are nostalgic for those now gone. A starfish is illuminated by the light from the loving eye of the lighthouse. There are only hopeless dreams … except in football. The final poem in the book, ‘The big dance’, reprises the grand final scene from the first poem – shifted now to the Melbourne Cricket Ground. It’s big time. Daniel Yammacoona, the character, doesn’t appear by name but he does appear in the form of two stanzas from the collection’s first poem exactly reproducing themselves in its last:

Here, ‘Daniel Yammacoona’, the poem, infects the final poem. Daniel Yammacoona, the collection, seems like a bit of an ellipsis separating these two moments. Here, finally, nostalgia is activated and moves on, accruing value. How these stanzas have grown!

This entry was posted in BOOK REVIEWS and tagged Damian Balassone, nick whittock. Bookmark the permalink.
Nick Whittock’s 2nd book hows its (inken publisch) will be ready for the summer. In 2012 he had a chapbook published in the Vagabond Rare Objects series. It has a picture of a cricket bat on the front cover. His first book's cover was a reproduction of a photograph of cricketers lying on the ground.