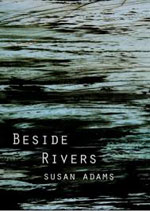 From ‘River Mould’ (p.58) a poem that did shine, ‘Mist/the colour of wet/shapes the river/moves/slow as growth on bread’ and from ‘Steeling’ (p.59) is a curious image that slips underneath the literal narrative, ‘Land is an easy drown/from the collusion of waters. The onslaught is havoc/as rainfalls become/sluts to rivers.’

Many of the poems in this collection detail shared witness and human intimacies, yet often the trajectory of storylines overwhelms the reader. The potential for Adams to realise a more engaging poetic is lost within an excess of words and information. Veracity is not always the best basis for poetry. Truth in poetry should be less about facts, and more about the parts of facts that sidestep into an authentic, better imagined truth within a poem or collection.

The poems that work best in Beside Rivers shed the narrative wordiness and embrace concision, allowing transitions to resonate, for example:

A few poems attempt to detail sex, either the act itself or the musings after. It is difficult to write sex in poetry skilfully without the poems seeming mawkish or cliché. From ‘Uvular’ (p.43):

I don’t wish to diminish Adams’ collection, which has much to offer a certain kind of reader, but the idea of a hair stuck on a dangly bit at the back of a throat after oral sex (and the poet enjoying that and writing a poem about it) leaves me a little flat. The rather obvious Mills & Boon-like description of ‘wet satin depths’ did not encourage me to take the journey with the poet. Sadly, quite the opposite.

This entry was posted in BOOK REVIEWS and tagged Louise Waller, Susan Adams. Bookmark the permalink.
Queensland poet Louise Waller is now a resident of Southern Tasmania. She has published two poetry collections, Slipway (Swelter Interactive Press 2003) and holding Job's hand (light-trap press 2008). Waller was writer-in-residence at Booranga Writers' Centre in May 2010. Her poetry appears in online and print journals including The Best Australian Poems 2009, Famous Reporter, fourW, and Overland 200. She is a contributing Editor for foam:e.