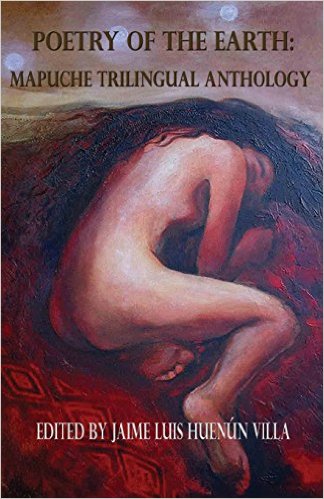 Book reviews tend to operate according to some kind of comparative drive: which are the writers whose work this resembles; is this work better or worse than those? Where can it be located in a historical system of literary relationships? Leaning on Harold Bloom’s theories of critical paternity testing and an inverted form of child support, this mode of review is supposed to gives us an idea of what the book might be like, whether we should bother reading it, perhaps even whether it should have been published in the first place.

In some ways, Poetry of the Earth: Mapuche Trilingual Anthology challenges us to abstain from these tropes. Poetry of the Earth is an extraordinary book, and before it and the work it contains can be compared to anything, it is necessary to consider just how remarkable it is as a publishing project. Works translated into English comprise approximately two to three percent of total publications each year (the figure sinks even lower if restricted to works of literature). Bilingual editions, though not uncommon for collections of poetry, are by no means standard practice. The reasons typically given for this are understandable: including the original text in a publication either doubles the page count (and increases printing costs) or halves the amount of work that can be included. Additionally, books that do get translated tend to be skewed towards Europe (French, German, Spanish, Italian, Russian). So to be able to pick up a book focusing exclusively on contemporary Mapuche poets, with all the poems published not just in Spanish and English, but also in Mapudungun, is truly radical. That it comes from an Australian press, explicitly framed within the context of inter-indigenous poetics and solidarity only makes it more unique. As such, the book almost seems to dare a reviewer to compare it to other books and not come out looking like an idiot, or worse.

In his foreword, Professor Lester-Irabinna Rigney quotes the Native American scholar Robert Warrior and his call to achieve indigenous intellectual sovereignty, utilising and preserving ‘to the fullest extent possible all that makes us unique and distinct as Indigenous peoples’. In his introduction, Dr. Sergio Holas Véliz makes the point that these poems are based on the ül, which refers to the song and poetry, and is part of the Mapuche art of the word. This art of the word involves subgenres relating to the use of it in a range of cultural practices such as those related to ‘healing, rogativas/praying, warrior songs and others’. Which is to say that although these poems are also in conversation with poetries familiar to Australian readers – there is a citation from Pound, one poem deals with Li Po – they are also deeply rooted in a set of practices of the word that cannot be directly translated as ‘poetry’ as it is traditionally understood in the literary-academic complex. To try to find a way through this, I want to look at three aspects which are of particular importance to the work included in the anthology and to its presentation as a publication; translation, dream/image and country. Each of these aspects reveals not just a tentative path toward saying something meaningful about this book, but also signals some of the false steps that threaten to obscure it.

Like reviewing, translation is based on a comparative impulse. Doesn’t every word have its pair in every other language? And every text as well? It is on the back of translation as a practice (and eventual field of study), and against the backdrop of the claims of new studies in ‘World Literature’, that comparative literature has established itself. The central problem of these disciplines is largely summed up by Emily Apter’s question in The Translation Zone: A New Comparative Literature: how are we ‘to make credible comparisons among radically different languages and literatures’(42)? Smoothing the way for a few texts to be read as literature through translation threatens to make of World Literature world music. One of the threats of translation is that it violently flattens the contour of the world.

This is why it is so important that this anthology has been published trilingually – because translation, as a practice in reading and writing, has serious ramifications. It is not simply the instrument through which cultures communicate, particularly when we are dealing with literatures that are largely unknown in the receiving culture. It is probably safe to say that were it not for the efforts of a handful of poets and scholars – including recent features by Cordite Poetry Review, the collection Espejo de Tierra/Earth Mirror edited by Gonzalo Rojas and Peter Minter, as well as Stuart Cooke’s academic work – contemporary Mapuche poetry would be entirely unknown to an Australian poetry readership. This audience tends to be extremely monolingual, and thus dominated heavily by work coming out of the UK and North America (though this is changing, with publishers and journals such as Vagabond Press, Mascara Literary Review, and indeed Cordite publishing an increasing amount of translations, and not just from the old Eurocentric suspects). In this context, the writers and the work selected, the manner of translation and presentation, can shape the perception of an entire literature, and the culture from which it stems.

At the same time, through making voices of Indigenous resistance and aesthetics audible to new readerships, this practice can be emancipatory. However, it must be undertaken with care. In her essay ‘The Politics of Translation’, Gayatri Chakravorty Spivak outlines some of the political implications of translation. Spivak argues for the need to tend to the ‘rhetoricity’ of the language of the original text – its specificity, the ways in which its language disrupts and resists logical structures. Neglecting this rhetoricity, either through an inability to engage with it, or a lack of care, represents a ‘species of neo-colonialist construction of the non-western scene’ (370-371). Translating into English – hegemony’s tongue – charges the load even more. What would it mean to translate these poems into flat, careless English? Spivak’s advice/warning here is strong: ‘if you want to make the translated text accessible, try doing it for the person who wrote it’ (379). I’m not sure I can think of a more adequate response to this appeal than to publish Poetry of the Earth with translations into Mapudungun as well, which for each poem precedes the Spanish and the English versions. It is a significant gesture of historical recuperation, considering that Mapudungun is on UNESCO’s list of endangered languages, and that the (partial) dislocation from this language is a recurring and mournful theme in this anthology. In Maribel Mora Curriao’s poem ‘Dreams in the valley’ – for me, one of the most arresting poems in the collection – the loss of Mapudungun is visceral. ‘Rapacious birds’ devour her hands and her tongue, which are then replaced by other hands, another tongue (the sense of ‘language’ in the Spanish ‘lengua’ is more prominent than in the English ‘tongue’). The tongue that is devoured is the tongue of her ancestors, the tongue which speaks the valley to which Curriao longs to return. As such, Victor Cifuentes Palacios’ translation of ‘Sueños en el valle’ into ‘Üyechi pülom mew ta pewman’ literally makes Curriao’s lament intelligible to her ancestors who embody the valley.

Unfortunately I am unable to speak to Cifuentes Palacios’ Mapudungun translations. Apart from the handful of Mapudungun words that I have learnt over the process of reading the book (Pewma – dream; perrimontun – related to the visions of an initiated machi [shaman]; Gnechen – a divinity, master of earth and peoples), I could only appreciate the form of its transliteration, its ornate visual patterning. But its presence is powerful: a stern rejection of the typical constraints of publishing, and an affirmation of the vitality and importance of Indigenous languages in the face of the threat of extinction and erasure.

The English translations by Juan Garrido-Salgado, Steve Brock and Sergio Holas are on the whole careful and caring. All three are poets, Garrido-Salgado and Holas both come from Chile, while Brock is Australian. This allows them to gain both a sense of what is special and specific in the language of the original, as well as finding the best term or turn of phrase in English. Reading each poem in the Spanish and then in the English, I found myself fastidiously underlining the English that did not correspond accurately to the Spanish. But looking back over them in detail later, trying to formulate what I felt was a more correct translation, I would find that my version sounded clunky and gauche, was more explicit than the original, or simply favoured the other sense of an ambiguous term, or would have to rearrange the syntax of the phrasing, totally disrupting the unity of the line. In short, the renderings in the book are considered solutions to difficult problems. There are, to my mind, some slips; it would be tedious reading to list them here, rather, I have highlighted a couple in my discussion of the poems.