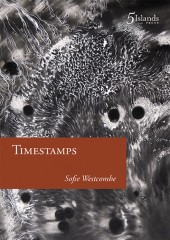 
So begins Sofie Westcombe’s debut collection Timestamps, one of the last books to be released from the Five Islands Press traps. At first glance it’s a curious choice for an opening poem, the ethereal New Age tone seemingly at odds with the rest of the collection’s insistence on the concrete. But this is poetry that shrugs off first glances, that beckons the reader in, inviting full engagement. The poems resist our habitual mode of poetry-decoding by refusing to state their intentions: the ‘meaning’ is often vague, forcing the reader to participate in the creative process by filling in the sense-gaps. And ‘Mochilera’ introduces us to this idea via the backpacker who journeys into new territory, communicating in novel ways, using sounds and finger-wiggles. Like the ‘Quiet One’, we as readers must find Westcombe’s tempo, staying open to the possibilities of a different type of interaction.

There’s no titular poem in the book, but the relevance of ‘timestamps’ is apparent in its definition: ‘a sequence of characters or encoded information identifying when a certain event occurred … sometimes accurate to a fraction of a second’. Westcombe’s poems are certainly careful records of split-second events: a wasp interrupting lunch, someone yelling from a bridge, napkins flapping on a table. Each is recorded with a precision and openness, an almost haiku-esque quality, that reflects and celebrates the potential depth of meaning in any ordinary experience. As in haiku, everyday events are given significance through the simple act of recording: ‘There is a sheen on the road,/ Sound a half tone deeper where the tires move/ Their tonnes (‘Toll’). At the same time, the open language enables a multitude of possible interpretations: ‘The edge of the mind/ Is at home in the bush./ Out here you could—/ Blank—/ Camera, memory/ Moot.’ (‘Lure’).

The neat and tidy structure of the collection (52 one-page poems, each line left-aligned with the first word capitalised) also seems pertinent to the title. The uniformity and brevity of form (the longest poem is 19 lines) makes it easy to imagine the collection as an album of timestamped events, one for each week of the year, pressed between the pages so as not to be lost in the annals of time, a way of saying

But the poems are much more than reportage. Their structure is often paratactical or, more specifically, what Brian Reed has described as ‘attenuated hypotaxis’ – clauses and phrases that are ‘tenuously interconnected’ though the connections are unclear.i It is this, to return to an earlier point, that forces the reader to make their own sense, draw their own lines of connectivity. What do we make of the opening lines of ‘Flypaper’, for example?

Is it a call to ‘seize the day’ uttered by someone nearing the end of their life? And what is the relevance of the garage? A place where one’s mode of transport lies dormant while one tinkers, wasting time on never-ending tasks? Or is tinkering the point, an attempt to ‘make a go of it’, fixing the dormant vehicle so that one can go places/ move on? Or does ‘the mouth of the garage’ simply allude to the jaws of death? Then there’s that mesmerising phrase, ‘the spent cigarettes doing black wonders’. A reference to lung cancer? Or just cigarette butts pirouetting through the air, having been cast aside (since ‘doing’ suggests some action) or lying squashed on the ground (as ‘black’ and the title ‘Flypaper’ suggest)? The line might have read ‘The spent cigarettes squashed like dead flies’, clearing up any ambiguity. Instead, the twisted syntax shies away from fixed interpretation, allowing the moment to become, as Lyn Hejinian puts it in ‘The Rejection of Closure’, ‘potent with ambiguity, meaning-full, unfixed and certainly incomplete’.i

It’s a practice often associated with the Language school—writing with an intent to involve the reader in the composition — but is Westcombe a Language poet? She certainly employs many Language school devices (insertion of overheard conversation, parataxis, deconstructed syntax) but she’s also happy to flirt with poetic elements that many Language poets rejected (personification, jeu de mots, simile, the poetic ‘I’). In this respect, she’s very much post-Language poet, or what Stephanie Burt dubbed ‘the elliptical poets’, those who rose from the dust of the Language v. Romantic-lyric battleground happy to wield the odd hammer or chisel from the Language toolbox but equally prepared to take up some of the old traditional tools (form, narrative, lyric) to create ‘poems as volatile as real life … (poems that) remake the self, pick up the pieces after its dissolution’.ii Terrance Hayes, Meghan O’Rourke and Burt herself are examples.

Pages: 1 2
This entry was posted in BOOK REVIEWS and tagged Alison Flett, Sofie Westcombe. Bookmark the permalink.
Alison Flett is originally from Scotland where she published three collections of poetry. Since moving to Australia, her work has been published in various journals and anthologies including Cordite Poetry Review, foame:e, Rabbit, Southerly, Stylus Lit and Tincture. She is poetry editor for Transnational Literature and runs, with Jill Jones, Little Windows Press.