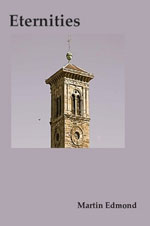 In this collection of prose pieces, memory and daydreaming are powerful forces, determinants rather than second-order effects. Its theme I take to be the transactions of past and present as they are occasioned by the spaces of a city (in this case, Sydney) or, to use another approach, Sydney’s ghosts. The title of almost every piece is or was an actual place in Sydney. The sites Edmond’s imagination gravitates towards might be seen as typical: legendary once-sharehouse (‘The Caledonian’), soggy-carpeted nightclub (‘The Manzil Room’), harbour’s edge (‘Blackwattle Bay’). While the pieces mostly derive from Edmond’s personal experiences of the city, some are enhanced by the work of archival research, amplifying the double vision of the past being tangible in the present. In the piece ‘Lane Cove’, upon arriving at a picnic spot, the realisation occurs that the place was the scene of a double suicide fifty years before, and that remains perturbed, or haunted, by this. There is a city imaginary at work in Eternities that, as a whole to this reviewer, owes something to the conventions of crime noir and its way of seeming to encompass the reach of a whole city simultaneously. Stylistically, the pieces are short imaginative essays, justified and without paragraphs recalling W.G. Sebald’s prose fiction – as does the use of photographs as punctuation between the pieces. Each piece expands until the memory reaches its full extension, a kind of tipping point or when question arises which brings the piece to a head. A ‘picture’ of life at that time is evoked, giving a sense of its routines and expectations through the proscenium of a place frequented in a certain period. Not all follow this order closely, ‘The Velodrome’ reads as a kind of alien encounter on a night walk: ‘Around and around its tilted oval the velocipedes raced, their helmeted riders bent low over the handlebars yet looking up with goggles like compound eyes: as if they were hosts of some alien parasite.’

The weight of prose detail could be described as nearly forensic. In ‘On Cleveland Street’ an old neighbourhood deli is evoked. The establishment closed down after the death of one of its owners, and Edmond writes of its lost atmosphere: ‘… that air of the 1950s (or earlier) which seems to me like a precious elixir that should somehow have been preserved…’. A slightly fanciful idea deriving from the field of archeo-acoustics holds that objects are encoded with the sounds of their own formation, and these sounds could potentially be played back given the right instrument. A similar logic underpins some of the pieces in Eternities, particularly those devoted to rooms and buildings once lived in or frequented: Proustian mémoires involontaires lying in wait to be triggered. Places are understood as clusters or gathering points of memory, thinking and emotional attachment to place.

In the first piece of the book, ‘The Bondi Tram’, an anachronistic image of a 1950s character is evoked, then followed where he might lead. Its mode is close to nostalgic, though this is undercut by the piece’s awareness of that nostalgia:

Whenever I drive down Bondi Road towards the beach in the afternoon (but never mind when I drive back up towards the Junction) an image comes to mind: it is of a man in an upstairs flat in one of the shop-fronts that line the street on the right hand side of the road. He is wearing a white singlet, high-waisted trousers, black shoes and is engaged in the process of preparing a simple meal on the single electric hot plate plugged in and sitting on a formica-covered shelf next to the stainless steel sink …

The city here is seen at the level of its contours (the descent down to Bondi Beach and the Pacific, ‘the blue sea that rises steeply to the horizon’) as it’s seen in other pieces at the domestic level of a floor’s patterned parquetry in a flat, Avona Avenue, Glebe). ‘The Dental Hospital’ is a visceral description of an experience of tooth extraction by student dentists. The tone, or mood, of much of the writing is lyrical and saturnine, occasionally maudlin. The ‘eternities’ of the title alludes to another Sydney writer, Arthur Stace, whose oeuvre, for Edmond, is perhaps a model of devotion to that city.

This entry was posted in BOOK REVIEWS and tagged Martin Edmonds, Tim Wright. Bookmark the permalink.
Tim Wright currently lives in Melbourne where among other things he reads and writes poems and is researching a thesis to do with contemporary Australian poetry.