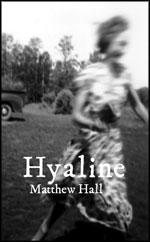 How does one review a book of poems that has no table of contents and no page numbers?

More to the point, perhaps, is how does one read such a book? What do those absences signify? Individual poems have titles, yet they seem to move on, almost glide on, from what preceded them, and into what follows. “Artifice’, the book’s first poem in the section ‘Harm’s Light’ in fact has each section beginning with the last line or two of the preceding section, pausing, but resuming , then handing on to its successor.

This seems an indication of how to read the whole book. Divided into seven sections, it’s not a single poem, and not in any obvious way a livre compose. But the title, Hyaline, seems singularly apt. Hyaline means glassy, or transparent, and is used in biology to describe, for example, cartilage. In an interview on publisher Jeremy Balius’ blog on 15th March, Hall sees the word as descriptive of his relation to nature, both ‘reflecting a personal ethics, and refracting back a portion of the natural through an ethical prism.’ But the title could also refer to the way there is no obvious pausing point when reading the book. Each poem consists of a concatenation of short phrases, rarely structured syntactically into single larger units. The opening lines of ‘artifice’, the collection’s first poem, sets the tone for what follows: ‘violence grows listening / seasonal at once / field weathered foxtrap / convex weathered armature…’And each poem hands the reader on to the next, so that one can glide through the book as one would skate across ice.

And Hall obviously knows about ice, coming originally from Canada. Two landscapes predominate and are in a sense shuffled together: Canada, with both its icy winter and leafy warmer weather, and Western Australia. Hyaline is, in fact, a pastoral. Not an anti-pastoral as John Kinsella describes it in his book Disclosed Poetics, rather a radical pastoral. It has grown out of the challenges involved in putting together – and psychologically and ethically holding together – two enormously different landscapes whose only obvious similarity is their immense size. But other similarities, such as their colonial histories, their land clearances, their environmental hazard, emerge as the collection progresses.

Describing Hyaline as pastoral does not mean that it is landscape poetry in any traditional or pictorial way. This is not a book for the faint-hearted. It can be described, rather unhelpfully, as ‘experimental poetry’, (though what good poetry isn’t, and wasn’t, in its time?) Hyaline constantly foregrounds language. However, unlike some experimental poetry, there is much more here than language’s display, or self display, or play. As he writes, ‘Ancient shadows / travail the shoals of language’, and later, ‘language is the residue of human relations’. Hall’s meticulous dexterity and precision of language is a vehicle for an interweaving of both love and concern for the two natural environments that he inhabits. The predominant note is elegiac – pastoral as a registering of damage, of loss, of love disappointed yet willing to celebrate its difficulties, even death. This is radical pastoral.

The two physical landscapes flow through each other, and are interwoven with and buoyed by the third, the landscape and ecology of language. This palimpsest effect (one poem is actually called ‘a palimpsest’) makes this a poetry of texture. It has a lightness to it, as it weaves light and darkness, water and earth, ice and brushfire, snow-laden fields and spinifex, vast skies and weathered rock, in a rippling or shimmering, ever-restless language. A recurring image is sunlight on water, or light shining through water, and that could also be an image for Hall’s poetry itself.

This is not to say that Hyaline lacks variety, far from it. There is great variety, and mastery, of form, ranging from brief short line semi-lyrics to one page and then more extended prose poems. And they are prose poems, displaying Hall’s impressively acute sense of rhythm and nuance. (My favourite is the two page ‘Anointment’ dedicated to Peter Larkin, who has clearly been an important influence.) Also, each of the seven sections has its distinct character, giving the volume structure and purpose. The result is a unified collection – Hall’s first full one – of subtlety, scope and achievement.

Hall’s challenge will be to see where he goes from here. The non-arresting surface of the poetry could, without great care, lead on to an effect of monotony. Besides, a career in poetry is not built by simply providing more of the same. On the other hand, Hall’s ecological concerns and dexterity of language could open up exciting further developments. I’m looking forward to finding out what comes next.

This entry was posted in BOOK REVIEWS and tagged Andrew Taylor, Matthew Hall. Bookmark the permalink.
Andrew Taylor is the author of more than fifteen book of poetry, the most recent being Collected Poems (Salt, UK 2004) and The unhaunting (Salt, UK 2009), which was short listed for the 2009 Western Australian Premier’s Book Awards. He is Professor Emeritus at Edith Cowan University and divides his time between Perth, Sydney and Wiesbaden in Germany.