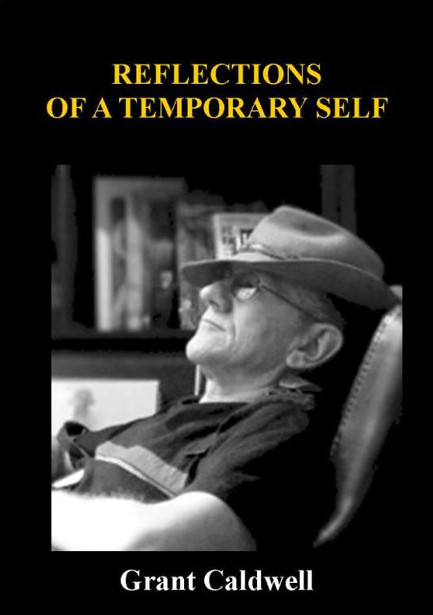 Reflections of a Temporary Self by Grant Caldwell
Collective Effort Press, 2015

Publishing a selected poems is an act of confidence. While no one who writes poems would want to be judged on their worst effort, a selection suggests these are the poems that – if readers must judge – the poet be judged upon. The act is, however, doubly denied by Caldwell in the qualified title, Reflections of a Temporary Self, and by the front cover author photo: is he asleep or isn’t he? The I-don’t-necessarily-give-a-fuck attitude is part of the package. I qualify the attitude because Caldwell, in producing an eighth book (consisting of poems from six previous books and new poems), clearly does give one.

The large type will be welcomed by the poorer sighted and it has a poster effect that gives the pages authority, suggesting that this is public poetry: it’s what I saw, heard, thought; what do you reckon? The poet might have moved on, into a new self, but the gesture remains. In noting my impression of the unapologetic strain in Caldwell’s work I don’t mean that it is necessarily aggressive. It can be unapologetically sweet:

Like John Shaw Neilson with the death taken out. You could say with the lilt out, as well; by analogy the impression is of a rock’n’roll Zen, especially this aspect cited by Wikipedia: ‘the personal expression of … insight in daily life, especially for the benefit of others’. The latter part of the quote is pure ironic Caldwell. Reflections contains a sarcastic poem about the facile adoption of Buddhism as an identity (‘einstein, buddhism and my stiff neck’) and it is one of the poems that verges on the genre of the grumpy-old-man poem. Yet, typically, the judgment is on Caldwell, or at least his narrator: thinking about Buddhists, he falls in the creek and bangs his hip. (It seems quintessentially Australian to fall in a creek and hurt yourself, rather than get wet or drown.)

There’s rhythm, there are images, and sometimes they meet. Caldwell is interested in the melancholy affects of repetition, as in ‘across the sea’ (‘the sea comes … it never stops/it never stops’); and in mundane investigations of logic in these concluding lines from ‘thirteen ways of looking at a window’:

This circularity is given its major form in ‘two black chairs’; as the poem goes on it becomes replete with chairs and tables, and a purse and fairy lights, and ‘elvis before his dissipation’, losing its sense of line (or gaining fullness) as the page becomes full with the swirl of words. All poems are concerned with the logic of their structures, but logic is also a theme of these poems, as if they want to work out the possibilities of logic in poetry. ‘like a tennis ball’ resembles a song structure – what could easily be read as a hip-hop structure, though I think it’s too unromanticised for that – where the abjection of alcoholic (prosaic) unhappiness is redeemed (poetically) by the mundane-lyrical image of a tennis ball in the last line.

Caldwell’s untitled haiku are read to advantage in a column of four, where the effect is of reading a series, rather than one per page, which might well have seemed flat or inconsequential. His haiku momentarily slow down reading by offering change in tone, voice and space. The mode is not completely distinct, however. The following two haiku from a camping sequence point to Caldwell’s interest in logic, circularity and repetition:

‘yarra yarra (ever flowing river)’ is a three part collage of Aboriginal place names, and includes many that have negative connotations (‘ONNUA white man with gun’; ‘BOGONG place infested with fleas’) but ultimately the momentum is towards a more positive affect: the final section including terms like ‘WOONINGCANNING where wild ducks flock and play together’, ‘MANGOPLAH people singing’ and ‘QUINDALUP a happy place’.

As a record of ‘more than thirty years’ of writing that tries different modes, the book’s diction is, inevitably, a mixture. At times the disparity’s too great: while irony can give a lot of weight to the vague ending (‘yair … sure …’) of ‘bar-b-q in blue’’s comic anecdote, it’s not so easy for irony to lighten the load of the following poem’s conclusion: ‘into new depths of ontology’ (‘mundane avenues of compensation’).

Caldwell’s version of the ‘I do this, I do that’ poem is one of white poverty: the drug and scam milieu. In ‘the colour of black light’ the narrator makes money from secondhand books then talks to the bookseller about Charles Bukowski, as if he defined the extreme version of white poverty as poetry and he probably does. It’s not as nice or as affectionate as O’Hara, but there is the same compositional thought and structure, where the elements of a day are brought together to make a poem. You can have no money, but if you have a TV you can still watch a documentary on Matisse. Class culture is complicated, and complications are normal.

Other poems (‘terra nullius’ and ‘baghdad etc.’) deal with the logic of hyperbole. Extreme comparisons are made to suggest the fabric of everyday power struggles that are implicated in greater ones everyday intolerance as a sliding scale to that of big business, government, the military. ‘baghdad etc’ begins, ‘it is better not to think’, and in this again, Caldwell is a kind of anti-O’Hara that is not quite paranoid.

When reading his poetry in performance, Caldwell characteristically makes enjambment explicit through a pronounced pause, and enjambment is something that figures in his poetry as much as the line as such. The poem ‘the fat bread’ employs spacing and line breaks to an extreme extent, in a way that is both highly contrived and wonderful; something about this poem – and the way it faces a photo of a child (presumably the author) as a scarecrow with arms wide – makes it seem an original contribution, both obvious and unique. It’s like a couple of haiku added together then stretched apart till breaking point:

Yet it is not completely obvious, because the syntactic inversions are not predictable; yet they do fit, and enliven and ironise the images. ‘the arrowfast tortoise’ evokes the fable of the tortoise and the hare, and makes it a character of the poem, along with the fat bread, neither of which are strictly visible. That ‘fat bread/bloated/pigeons’ are still pecking is itself ironic, but narrative irony is less emphasised than that of syntax, while spacing ironises both word and phrase as image. It is a wry little masterpiece.

Pages: 1 2
This entry was posted in BOOK REVIEWS and tagged Grant Caldwell, michael farrell. Bookmark the permalink.
Michael Farrell's I Love Poetry and A Lyrebird: Selected Poems are both out this year (2017): from Giramondo and Blazevox, respectively. His scholarly book, Writing Australian Unsettlement: Modes of Poetic Invention 1796-1945, was published by Palgrave Macmillan.