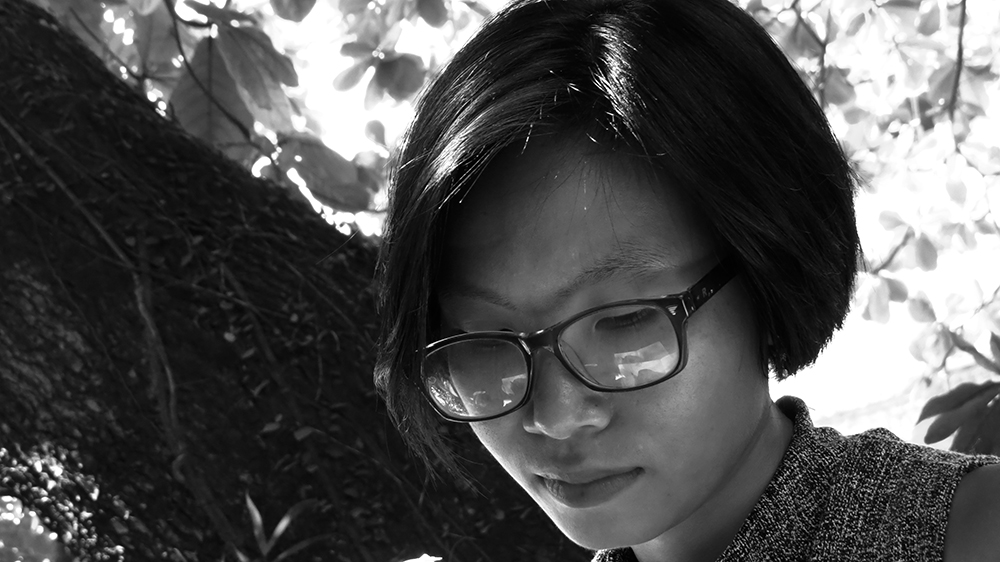 The Mirror Illuminating Me

I do not wish to attach gendered words to poetry: male or female, homo or hetero sexual – such labels give me the same heavy feeling as when taking stock of excessive items I unwittingly burden myself with on a long journey. Yet I also hear a difference in the stories that seem to originate from and flow into the experiences of female authors.

In Vietnamese, the word for ‘women’ is composed of two components: ‘phụ’ and ‘nữ’ from the Chinese ‘婦’and ‘女’, in which ‘phụ’ refers to females with husbands, and ‘nữ’ refers to females without husbands, thus locating females inside their familial relations. Here and throughout this essay, I use ‘nữ’ by itself (without the ‘phụ’) as an intentional handling of male-female relationships that leaves behind the constraints of familial relationships and places men and women, the masculine and the feminine, in positions of (assumed) equality regardless of differences in sexuality and biology.1

The authors I touch upon in this essay – perhaps not the female poets most in accordance with my personal taste – share a common story in which I am more or less implicated. I see their choices to write as a means of displaying a female experience, and – with a straightforwardness and sharp intentionality at every step – reject the matter of females as reflected objects. Instead, they assert their self-reflected subjecthood. In continuing a dialogue with certain rebellious experiences of writers in the past, their works have grown up with a strong awareness of protest against oppressive societal structures. They toil to reimagine womanhood in order to create a visible presence of femininity, as well as elicit hope for a community of Vietnamese female writers. At the very least, that is one story in recent Vietnamese literature that can and should be stirred.

To knock on the door of small private homes of female poets or to press an ear to their deserted walls, is, at times, to touch the happiness of solitude’s freedom, a solitude so assertive that no one can penetrate it. Sometimes I knock on a door only to hear the echo of my own vague knocking, sometimes I press my ear to a wall only to feel the breath of deserted moss. Other times I hear a scream, a strange shrieking, a shattering, a wall cracking, a rock dropped, a sob, a wail, a whimper, an arrogant laugh, a hopeless scattering of oneself down into the depths of an imaginary chasm … and whenever my ear is struck by words of explanation, analysis or emphatic declaration and condemnation, I can still feel emotion and imagination prickling the skin of female bodies. My body naturally trembles. For these reasons, and within this essay, I choose to use the provisional label of ‘female poetry’ and observe the (self)-reflected image of female poets’ most private aspect closest to ‘the feminine’: narratives of the body.

Around the turn of the century, it seemed as if some Vietnamese readers were expecting a wave of female poetry – with authors of various ages both inside and outside the country – who held radical concepts within their written art, such as those living abroad, notably Lê Thị Thấm Vân, Lê Thị Huệ, Nguyễn Thị Thanh Bình, Nguyễn Thị Hoàng Bắc, Nguyễn Thị Ngọc Nhung, Trịnh Thanh Thủy, Đỗ Lê Anhdao, Miên Đáng and Trần Minh Quân. Too, those in Vietnam like Dư Thị Hoàn, Ý Nhi, and younger poets Ly Hoàng Ly, Phan Huyền Thư, Nguyễn Thúy Hằng, and the Ngựa Trời (Praying Mantis) group of female poets – Thanh Xuân, Lynh Bacardi, Khương Hà, Phương Lan, and Nguyệt Phạm – harbouring similar concepts. Within these sets, some illustrate the straightforward demand for women’s rights, while other voices are seemingly apolitical, exploring the experiences of the imagination and refusing to express any clear message. The voice of the body, of the imagination, notions of love, sexuality, self-definition; how can such private concepts grow into a shared story of female poetry? How can the presence of individuals awaken in each other a consciousness of suppression and in turn demand the resistance to such suppression? When do power relationships need critical reflection, as those existing between males and females, women and men, female writers and male writers, female writers and their societal structure, female writers and themselves, or, more essentially, the enduring system of inequality between the presence of femininity and masculinity? Though I have not yet had the fortune of surveying many original voices from the pens of women writing in Vietnamese, I believe there have been notable interrogations of the prejudices placed on women and their representation in Vietnamese literature – in the past as well as the currently passing period. It is through linguistic strategies that such writing can present a distinct feminine experience and essence, enabling the feminine disposition to transform into a thriving vitality of language.

I Am a Lady: Grass in a Game of Wind

An image that emerges from numerous pages of female writing, in bluntness of language and poetic message, is that of a feminist discourse protesting the heavy-shouldered weight of past masculine discourses rooted in patriarchy. Although there are only four female authors who appear in the unique collection 26 Contemporary Vietnamese Poets (Tân Thư Publishing House, USA, 2001), the theme of agitating for feminism – particularly within the poetry of Nguyễn Thị Hoàng Bắc and Lê Thị Huệ – nonetheless creates a provocative impression. I take pleasure in Nguyễn Thị Hoàng Bắc for her distinctive tone, bemused humour in great sorrow, levity in deep compassion, as it quietly mocks, ready for attack yet seeming to maintain something poetic.

Here, the image of a solemn and sacred bridal reception, in accordance with traditional customs, a symbolic image of hierarchy and ritual in which conceptions of love and marriage converge, gets de-sanctified through permutations of vocabulary. The words describing the marriage betrothal ceremony simultaneously represent an actual war battle – where the betrothal drum becomes the battle drum, the scene of vows being exchanged is represented as ‘plainly bloodshot and strained’ – and the scene of marital union as ‘together we lead the frontline’. We can see a transformation of the woman’s condition from passive to active stemming from a change in perspective of the object. Reaching the end of the poem, ‘that bum there’ is merely ‘that puppet man there’, the object with an ability to dominate (man) is turned into a passive figure, a phantom (puppet). With a seemingly lighthearted poem, Nguyễn Thị Hoàng Bắc has on one hand subverted the hierarchical relation of a husband-wife status by establishing equalised relations, and on the other she has unmasked the system of language that oppresses women from unconscious use by writers and readers by parodying that language system. The battle may be dramatic – ‘plainly bloodshot and strained’ – but it is not loud, and for that the poem is, in a differently illuminated meaning, truly romantic.

Pages: 1 2 3 4
This entry was posted in ESSAYS and tagged Dư Thị Hoàn, Kaitlin Rees, Lê Thị Huệ, Lê Thị Thấm Vân, Nguyễn Thị Hoàng Bắc, Nguyễn Vũ Khuyên, Nhã Thuyên, Trần Minh Quân. Bookmark the permalink.
Nhã Thuyên was born in 1986 in Việt Nam and works as a writer and editor in Hà Nội. Her most recent books are bất\ \tuẫn: những hiện diện [tự-] vắng trong thơ Việt and its English edition: un\ \martyred: [self-]vanishing presences in Vietnamese poetry (Roofbook, USA, 2019) and moon fevers (Tilted Axis Press, UK, 2019). Her main practices are writing between languages, experimenting with translations, and poetic exchanges. With Kaitlin Rees, she founded AJAR in 2014, a micro bilingual literary journal-press, a precariously online, printed space for poetic exchange. She otherwise talks to walls and soliloquies nonsense when having no other emergencies of life to deal with. Her next book of poetry vị nước (taste of waters) is waiting to see the moon.