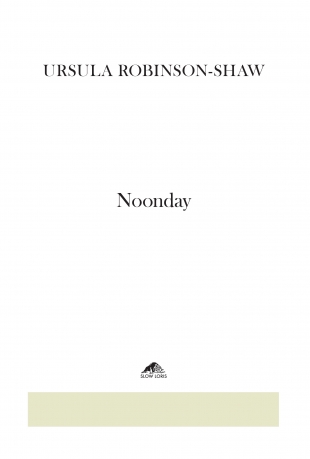 Noonday is an intriguingly built set of poems. As a reader, I am looking to be jolted into a new paradigm. I want the poet to raise the stakes and am generally looking for puzzles I cannot solve. It seems a bonus if the work doesn’t remind me of anybody else’s poetry. In this debut chapbook (out of the excellent Slow Loris imprint of Puncher and Wattmann), Robinson-Shaw does all of this with a curious and compelling combination of elan and humility. How do these even belong together – elan, humility – and how does this operate to bring us the silkily resolved work of this collection? And by resolved, I don’t mean without room to take this style even further. And by ‘belong together’, I’m not suggesting for a second that there isn’t texture and dirty hip-and-shouldering aplenty in these poems, between ideas and between fragments.

‘Sonnet for the Good Meat’ exemplifies this by propping a dare in the opening lines – ‘g says the only way to write a love/poem is to make sure you’ve never read a sonnet before in your/life’ – and then unleashing a neon wave of unhinged, pacey lines that gather up every punkish extremity and surprising inclusion they can conjure in their wake. Almost every line begins with the name ‘Jenny’, until it feels like a new form of punctuation: ‘jenny jenny jenny/jenny we are fucked from the perspective of eternity/jenny it’s scary but that’s the price of freedom/lolling around in the interminable present’.

The poem ‘Noonday Demon’ concocts a psychogenic topography, a kind of meandering, mental detritus diorama. It is a list poem, but with teeth. This begins with a ramble over literal landscape signifiers, sprinkled with self-deprecation – ‘it is taking myself for a walk/down to the hill or the mountain slope/down to the ravine’ – pitstopping at ‘it is my pink rubber trousseau filled with divorce letters’ and ‘it is to steal butter from my neighbours . . . like a fox’. It then broadens its own field with other ‘definitional’ gambits – ‘it is my floor mattress and my industrial conditioner’, ‘it is my gnarly emotional plasticity’, ‘it is living on the cream at the top of the bottle’ – which seem to cluster around two capitalised segments. At first, I wanted to read these as two separate climactic points, two word-peaks (to continue the metaphor of landscape) compelling us to pay attention with their bold stance:

Perhaps, though, they function as primarily stylistic, for the pleasure of their author and for us as readers. The poems do bounce with confidence and energy but in saying that, Robinson-Shaw does this – arrangement of suppositions, poking us in the eye poetically and offering up despair reconfigured as curiosities – with a lit match nearby, and an escape plan folded neatly in her pocket.

Measured scepticism features as an intended corrective; it seems to both undercut – or unbalance – the declamatory or commentating words or segments it interleaves. This adds up to a sweet wryness. Robinson-Shaw’s poems can have it both ways by never proclaiming answers, even while actively critiquing that which deserves evisceration:

These lines, from ‘Conspiracy Party’, perform this wryness in a kind of circular dance – the ‘elliptical reality’ the lines name – where no one is sure where self-hood begins or ends. Or that it was dreamed up in ‘marketing’, and now no one can stop this deluge of absurd meaning–manufacture we unwittingly swim around in. I see this in other poems also, such as ‘Vogelfrei’: ‘this is the post-scarcity/digital psychosis phase even the sacred/penetrating in the chinks of the profane/has been paywalled, your mentors/all died of indecent exposure/altho good news population decrease makes it easier/to run crotchless between houses’.

This somehow calls to mind and trumps Anne Carson’s famous ‘If prose is a house, poetry is a man on fire running quite fast through it’. i

iKate Kellaway, ‘Anne Carson: I do not believe in art as therapy’, The Guardian, 30 October 2016.

Pages: 1 2
This entry was posted in BOOK REVIEWS and tagged Melinda Bufton, Ursula Robinson-Shaw. Bookmark the permalink.
Melinda Bufton is a Melbourne-based poet and reviewer. Her work has appeared in a number of publications including Cordite, The Age, Rabbit, Southerly and Best Australian Poems. In 2014 her first poetry collection, Girlery, was published. Her follow up collection, Moxie, was published in 2019.