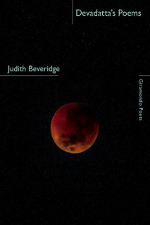 In her 1996 collection, Accidental Grace, Judith Beveridge published a series of six poems entitled ‘The Buddha Cycle’. The poems in ‘The Buddha Cycle’ are each spoken by individuals, predominantly low in the caste system, who look to the Buddha for some hope or guidance. This marked the beginning of what has become, for Beveridge, an enduring interest in the Buddha and Buddhist history, a subject she has approached from a number of shifting perspectives.

Her next collection, Wolf Notes (2003), for example, contained a much longer series of 38 poems, collectively titled ‘Between the Palace and the Bodhi Tree’, which imaginatively trace the wanderings of Siddhattha Gotama after he left his father’s palace and before he reached enlightenment and became the Buddha. These poems are formally and imagistically exquisite, and earned Beveridge both the Josephine Ulrick Poetry Prize and the Queensland Premier’s Literary Award for Poetry.

Now, eleven years and four collections later, Beveridge has returned to Buddhist history, approaching it from yet a different position. Devadatta’s Poems, as Beveridge’s explanatory introduction informs us, are ‘written in the voice of’ Siddhattha’s cousin Devadatta, who initially joins the Buddha’s order, but later tries to usurp control, making three unsuccessful attempts on his cousin’s life. Beveridge points out that, while ‘some commentators say that Devadatta was the brother of Yasodhara, Siddhattha’s wife,’ she has chosen to follow the alternative version, in which Devadatta was a suitor for Yasodhara’s hand and is still consumed by jealousy and desire for her. Beveridge also explains that she chose to make Devadatta ‘more wistful and equivocal than is suggested in the Pali Canon.’ This is a fruitful decision, and the resulting poems are rich in psychologically complex insight and tension, as well as exhibiting Beveridge’s characteristic formal and musical virtuosity.

Devadatta’s Poems could be likened to a kind of concentrated or impressionistic verse novel. A subtle narrative is developed across the collection, tracing Devadatta’s journey from his home in Kapilavatthu, his time as a monk, and his later desertion and plotting against Siddhattha. Interspersed throughout this narrative are poems that narrate Devadatta’s homesickness, his desire for Yasodhara, his memories of childhood friendship with Siddhattha, and his psychological turmoil.

A clear focus in Devadatta’s Poems is the exploration and development of character. Devadatta is an unhappy and conflicted man, and a narrator whose ambivalence and existential angst appeal to the contemporary reader. He is fixated on the sensory world and consumed by envy and desire for all that belongs to Siddhatta: his wife, his influence over others and, perhaps most importantly, his peace of mind. Yet his lust for Yasodhara is not violent but gentle and tender. In ‘Her Hair’, he imagines that Yasodhara ‘is letting/me thread jasmine, or strips of perfumed bark through her hair;/that I’m rolling it into a thick bun at her nape,/dressing it with oil or adorning it with feathers.’ Devadatta is self-aware and yet weak. In ‘Watching the Moon’, he excuses his behaviour as predestined: ‘like me – moon,/you are fated to always give way to the dark.’ In ‘In Rajagaha’ he grows ‘sorrowful and glum, wondering/if I will inspire anything but windy dissonance.’ At other times his melancholy is poignant, as in ‘Thinking of Kapilavatthu’, when he wonders, ‘do the other monks//ever grow homesick, or can they forget their agonies/of memory, the thickness of loss and just keep unerringly/returning to the present?’

Although we remain entirely within Devadatta’s perspective, there is an implicit opposition established here between Devadatta and Siddhattha. In ‘The Buddha at Uruvela’, Devadatta offers what might be considered a proto-Marxist critique of his cousin’s teaching:

Yet this critique is undercut by Devadatta’s clear suffering over the course of these poems. One of the central contentions of this collection appears to be that suffering is indeed a product of desire. Devadatta is, after all, as Beveridge informs us, a privileged member of the dominant khattiya or ‘warrior or ministerial’ caste, who has never experienced true poverty or oppression. Despite the slow revelation of Devadatta’s suffering as a product of his jealousy and covetousness, Devadatta’s Poems is never baldly ideological, instead structured by a rhythmic undulation between an appreciation of the true, sensual beauty of the material world and recognition of its impermanence, a conflict between an ethics of celebration and one of austerity or self-denial that is also of interest to the contemporary reader.
Much of this conflict is carried out in subtle ways at the level of form, structure, rhythm and imagery.

Beveridge is one of our consummate poets of form: for her, form is as inevitable and as profound as breath. The most common form in Devadatta’s Poems consists of four quatrains or quintains with lines of roughly equal length. However, at other times Beveridge manipulates line length to create a sense of movement or tension. Repetitive forms, including variants on the pantoum, come to represent the constant turning over of the unquiet mind. The poem ‘Tailspin’, for example, narrates Devadatta’s attempts to meditate and his inability to control his thoughts:

Beveridge’s rhythms rise and fall, hinge on a breath and then turn or repeat in reverse. These rhythms play out across the collection as a whole, within individual poems, and in countless single lines, such as: ‘of their arms. I dream’ (‘Flower Stall’); or the central line here:

Pages: 1 2
This entry was posted in BOOK REVIEWS and tagged Emily Bitto, Judith Beveridge. Bookmark the permalink.
Emily Bitto lives in Melbourne, where she teaches creative writing at the University of Melbourne and Victoria University. Her poetry has appeared in Meanjin, Island, Heat, the Australian Literary Review and the Sydney Morning Herald. Her debut novel, The Strays, was shortlisted for the 2013 Victorian Premier’s Literary Award for an Unpublished Manuscript, and was published by Affirm Press in May 2014.