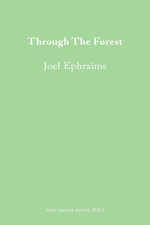 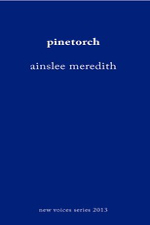 Through the Forest
by Joel Ephraims
Australia Poetry / Express Media, 2013

The two latest chapbooks in Australian Poetry’s new voices series are remarkable because they occupy two very different kinds of poetic practice to equally interesting and impressive ends. Both are playful, and push against the boundaries of form, with a crisp lyric impulse at play in Meredith’s work and an almost psychedelic sensibility animating Ephraims’s collection.

Ainslee Meredith’s Pinetorch is a dreamy and dark collection of poems, deeply interested in the unconscious and the vaguely surreal. Many of the poems are allusive and slippery, connected by a gentle dream-logic that is perhaps most overt in the four prose poems interspersed across the book. Some of these work by accruing and then disturbing small and disconcerting details. ‘Idee Fixe’, for example, opens with the lines: ‘A long table in someone else’s nightmare. Three white plates, unused. Cutlery on a sideboard […] It rains outside, but someone has not dreamt of drainpipes.’ The skill with which Meredith transforms both interiority and exteriority here, as well as surprising turn on ‘someone’, both abstract and then definite, is remarkable for the way it unravels and enacts a dreaming language. Other prose poems, like ‘Antistrophe’ are tiny, absurd fables:

Gods, like kings, saints, grandparents and bears are recurring figures throughout the book, in keeping with its allegorical, almost mythical aesthetic. Meredith’s poems range widely across both time and space, traversing icy landscapes, Middle Europe and the Mediterranean, cinemascapes and dreamscapes, as well as intimate, domestic interiors. In each case they are anchored by collections of objects, and the human histories that they hold:

Meredith’s tableaux, strangely enough, are largely missing human presence; they bear the traces, but not the physical bodies of the people that might otherwise animate them. At times, this does make the poems a little cold, or hard; but when their emotional or expressive registers do work, they are powerful precisely because they are indirect and undefined, left open and unended.

Most frequently, this occurs in the poems of lust and longing scattered throughout the collection. Often, this coincides with a sense of waiting – such as in the poem ‘Sirop’, which opens with the lines ‘All that counts is keeping time/ with my foot on the floorboards’ – or with a shifting of temporality. In ‘Advent Meaning’, fragmentary events unfold both in the present and in a projected, remembering future: ‘could we talk about this later, could/ we talk about it not at all’.

Where there’s a weakness to the collection, however, it’s in its repetition: images of feet, footsteps and shoes, of doors and locks, cloths or fabric, and salt, or salt on skin, are repeated throughout the book, and do come to lose some of their impact as a result. This is, or course, not unusual in an early collection, and if anything is testament to the deliberate focus of Meredith’s aesthetic and craft.

Joel Ephraims’s Through the Forest, too, is very much a young poet’s book; or more specifically, a young man’s book, in this case because of its wildly rambunctious energy, its attractions to both psychedelica and beautiful women, and the clear influence of rowdy writers like Allen Ginsberg, Richard Brautigan, John Forbes and, of course, Alan Wearne (one of Ephraims’s teachers at the University of Wollongong).

Ephraims’s poems have a huge imaginative range – Camelot, the Gaza Strip, Orion and Andromeda frequently collide with backyard porches, highways, schools and tram tracks; just as there are poems responding to Diane Arbus and Woody Allen, as well as Kerouac and Mallarmé. So too is Ephraims’s wild imagination evident in the wonderful titles of his poems, which include ‘Alas! Funny Bone!’, ‘Microwavable Haiku Popcorn’ and ‘There are 436 Watermelon Rock Candies Inside the Glass Bottle.’

Yet as with Meredith, there are elements of over-repetition here: many of the poems rely on circularity, on a repetition of the opening line at the end of the poem, or on final, exclamatory statements, such as ‘Ah’, ‘O Diane,’ ‘I am bitter’ or ‘(It’s so easy.)’ Thematically, too, many of the poems are about lust, or fascinated relationships with women, or about intense, strangely luminescent parties and nighttime explorations of a city. Ephraims does consciously play with these themes – one of the love poems, ‘Picture of a Nude Aquarium’ opens with the lines ‘She takes off/ her dress/ unambiguously’; other poems make concrete objects out of punctuation marks – and the poet is always aware of his mediating figure in scenes that he presents, or even re-presents in variations throughout the collection.

There are also some very moving, more delicate poems within Through the Forest, such as ‘A Message to Darkness’ and ‘Maelstrom’, both of which balance Ephraims’s energy and expansive gestures towards the cosmic with a dark melancholy and longing. These poems are powerful still points within the freneticism of the rest of the collection, and manage to ground the full sequence of poems when it threatens to move too far into the abstract and numinous.

Both Pinetorch and Through the Forest are exciting books because of the assuredness and the freshness of the poetic voices they contain. Meredith’s surreal dreaminess, and Ephraims’s brazen, sweeping energy are both, at times, a little rough around the edges, but both differ from so many contemporary Australian poets and, as a result, these little books are refreshing, hopeful and above all, very exciting to read.

This entry was posted in BOOK REVIEWS and tagged Ainslee Meredith, Fiona Wright, Joel Ephraims. Bookmark the permalink.
Fiona Wright is a doctoral candidate with the University of Western Sydney Writing & Society Research Centre. Her poetry collection Knuckled (2011) won the Dame Mary Gilmore Award for a first collection in 2012.