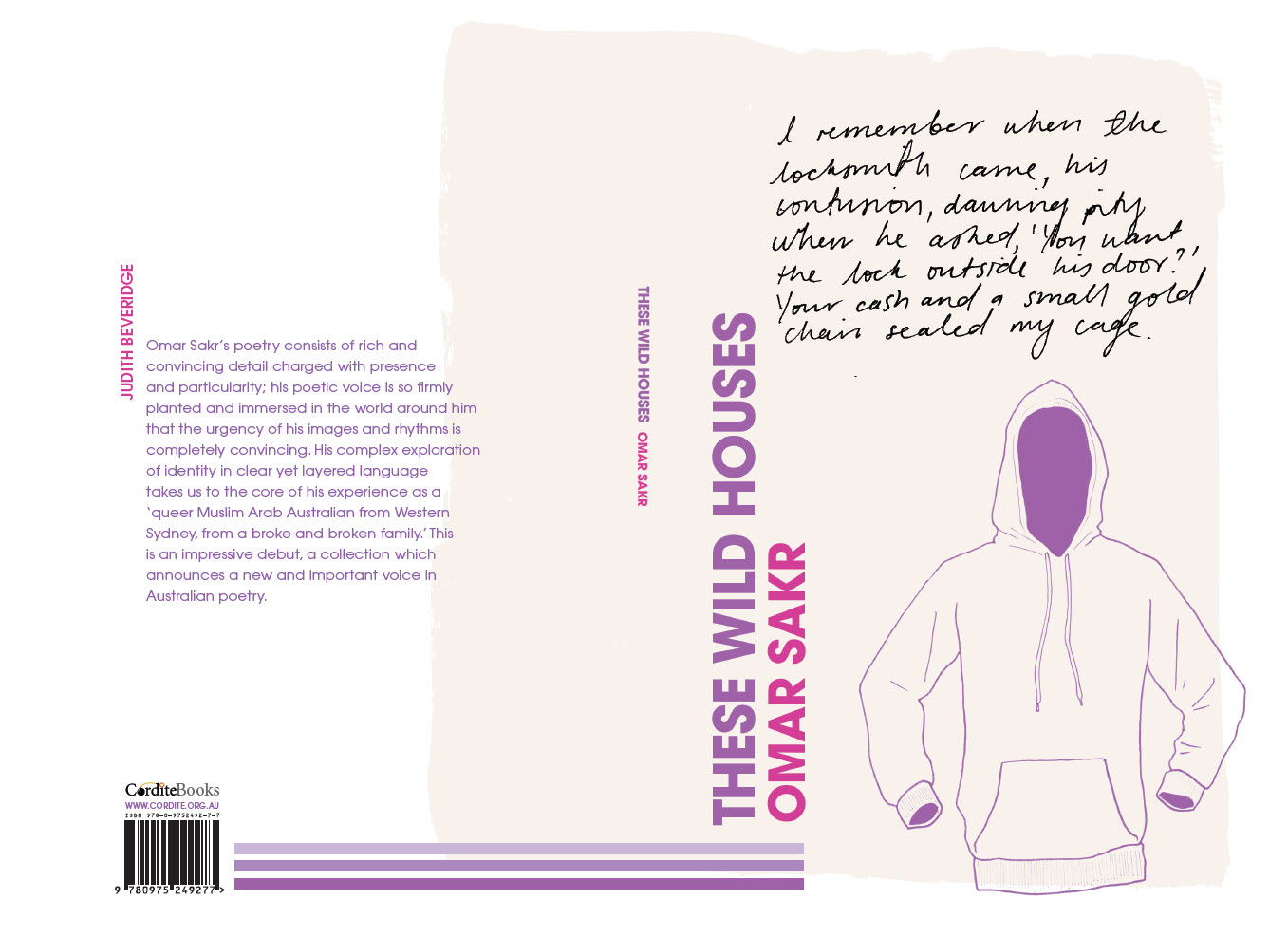 Omar Sakr’s These Wild Houses is a complex exploration of identity, an identity exposed in clear yet layered language, a language that takes us to the core of what he has experienced as a ‘queer Muslim Arab Australian from Western Sydney, from a broke and broken family.’ Given the rarity of Australian poetry written from these particular perspectives, and given that all these labels still carry stigma and disadvantage, you might think that you could guess the tone and content of the poems from these biographical details. You might expect anger, rage, resentment, bitterness, poems that rail against prejudice and injustice, and while these emotions do feature in the work, they are tempered with compassion, warmth, tenderness, understanding and supple perceptions. In the first poem, ‘Door Open’, Sakr welcomes us in to his world: ‘Come inside, let me / warm you with all I am’. And he does warm us with his intimacy of voice, his inclusivity, his emotional diction.

There are many references to houses in the volume, and for Sakr these are important sites: places in which we can come to terms with who we are, places where we learn the stories about ourselves, and among other things, where we can experience displacement, cruelty, neglect. In ‘ghosting the ghetto’ he tells us how in ‘their third floor brick flat, the one tucked into the asphalt folds of Warwick Farm … my grandparents were rebuilding Lebanon’. This beautiful poem with its long-breathed lines and confluence of rhythms explores generational change and the way in which Muslim and Australian worlds collide and intersect: ‘Beirut became Bondi became Liverpool, & the local creek behind the cricket pitch / drank the old rivers, and new names blessed our flesh: Nike, Adidas, Reebok.’ In many poems he delves into complexities and complications that arise from coming from a multi-cultural background. In ‘All My Names’, he says ‘I never knew / what to do with all my names, these silhouettes, of a boy I never was or wanted.’ Throughout the book, houses and rooms are metaphors for states of being; as he says in the final poem, ‘A house should, above all, be still.’

What strikes me especially in these poems is the way in which Sakr grounds his work so indelibly in the body. He knows thoroughly that the body is the primary house, the one in which our identities are irrevocably caught: in the skin, under the skin, in the heart.

In many instances this knowledge is rhapsodically transformed, as in these lines from ‘What the Landlord Owns’:

Sakr’s poetry consists of rich and convincing detail charged with presence and particularity; his poetic voice is so firmly planted and immersed in the world around him that the urgency of his images and rhythms is completely convincing. Sakr never summarises or straitjackets the emotions; instead he allows the tonal range of his voice to surface through layers of astutely organised rhythms and imagery.

These Wild Houses is an impressive debut, a collection which announces a new and important voice in Australian poetry.

This entry was posted in INTRODUCTIONS and tagged Alissa Dinallo, Judith Beveridge, Lily Mae Martin, Omar Sakr. Bookmark the permalink.
Judith Beveridge is the author of seven collections of poetry, most recently Sun Music: New and Selected Poems which won the 2019 Prime Minister’s poetry prize. She has also been awarded the Christopher Brennan and Philip Hodgins Memorial Medals for excellence in Literature. She was poetry editor for Meanjin from 2005-2016. Her work has been studied in schools and universities and has been translated into several languages.


More by Judith Beveridge on Cordite Poetry Review →
Alissa Dinallo is a Sydney-based book designer who has worked in-house at Allen & Unwin and Penguin Random House. When not designing for commercial publishing houses, she also works closely with writers to create artist’s books and typographic works. She is also a co-founder of BookEating Press, a boutique publishing company. She was named Young Designer of the Year at the 2015 Australian Book Design Awards.