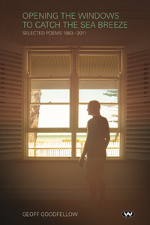 Geoff Goodfellow has been a ‘people’s poet’ for thirty years. The qualifications he brings to the role seem simple enough, if a little generic: a rugged working class upbringing; a simple style and language that anyone can understand and relate to; time spent working with, and reading to, workers, prisoners, the unemployed. However, to write about ordinary lives without sinking into banality, you have to be extra-ordinary. If there is nothing especially singular about your world, you must make yourself singular, and this has been Geoff Goodfellow’s project, layer upon layer, year upon year.

He writes, essentially, to perform, and does so at least as often to a lay audience as to a ‘poetry’ one. Most of the earlier poetry reflects this, and poems often end in classic performance poem style. The verse rolls along in an elliptic loop, sometimes with a refrain to keep it going, and then finishes with an almost-joking summation, that flips back to an image from earlier in the poem, and ties everything together. For example in ‘Beware of the Penguins’, the nuns at his primary school are couched as cruel and slightly insane, and so, almost inevitably, the poem ends:

This works fine in performance, and one only needs to see him read, or even find a YouTube clip, to execute the necessary act of imaginative ventriloquism that brings these poems to life. But without such intervention, on the page, the effect is often leaden, and more to the point, obtrusive, because otherwise there is no particular style, no distinctive torsion within the lines: there is nothing in the arrangement of the words, for the most part, that changes the effect the words have. This becomes even clearer the with occasional piece of prose poetry – they are exactly the same as the verse poems. Consider these two poems about his friend Eddy, one verse and one prose: ‘Although Eddy has been / out of Ireland / a quarter of a century / his voice is terrorist green / his language invariably blue / & his politics / positively red.’ from ‘Unsteady Eddy’ and ‘I’m with Eddy today. He’s mad. Crazy. A loony tune. A lunatic. But that’s okay. I’m mad too. I’m madder than eddy, if that’s possible. It is, of course. Anything is possible.’ from ‘Me and Eddy’.

It is all information – or so it seems. I am showing, you, he says, what it is like to live in this world, at the sharp end, the working end, where poetry so rarely deigns to venture. The implication is that any intervening technique or style will get in the way, and alienate those who are from that world. In fact, it reflects Goodfellow the poet, not the world he draws from.

Another poet who portrays working class life, Π O, writes poems that look like everything is happening on the page, rather than nothing, while Alan Wearne’s more lower-middle-class universe is made up of – if not of everything in the world – everything in poetry. Opening the Windows to Catch the Sea Breeze is an ideal way to read Geoff Goodfellow because, through what he says directly and the manifestation of his persona in different contexts at different times, he shows himself, definitively, to be just as much a self-construct as any other poet.

His work, taken all together is like an almost endless 18th century ballad, with poet as Everyman, Christian, mariner – you can take your pick. The effect is reinforced by the collection’s introduction and the brief introductions to each book selected from: Goodfellow is always front and centre, working, reading, getting the hang of things, and generally winning.

At least that’s what he tells us. On the page, where – remember, as a general rule, there is not much happening – he doesn’t always keep the narrative straight. In the poems from Love is Cruel, ostensibly light-hearted and playful, there is a strange mix of boast and ambivalence, as if he doesn’t quite know what to do with the subject of sex, or of love, or even with his new life as literary figure. Immediately following this are the poems he wrote after his father died. Goodfellow tries to get ‘there’ first, as usual, telling us that they are ‘a poignant mixture of compassion, acceptance and regret,’ but really they are a revelatory mix of nostalgia, helpless love, and a doomed attempt to be both the same kind of man as his father and a completely different one. Consider this from ‘The Accent’:

At this point in the collection something interesting coalesces that makes it more than the sum of its parts, so that when, in ‘I’m No Orphan,’ he makes sure to tell his (deceased) dad about all the women he has been with since his funeral, it makes sense, rather than sounding merely vainglorious, as Goodfellow occasionally does earlier on.

When Goodfellow is diagnosed with cancer, and there is no readymade template available, he attempts to fill the poems with the way the medical profession treats working class people, but the poems aren’t having any of it. The shorter poems on this topic look familiar, but are full of silence and terror, while ‘The Seventh Doctor’, by far the longest poem in the book, is a complete departure. All the distance collapses, and though it is couched in a balladic storytelling structure (the first doctor, the second doctor, etc.), it is also emotionally precise:

In the end, as he has hinted at throughout, Goodfellow is far more interesting when writing about himself that he is about class, or work, or sex, or the world.

This entry was posted in BOOK REVIEWS and tagged Geoff Goodfellow, Peter Kenneally. Bookmark the permalink.
Peter Kenneally is a librarian, writer and reviewer, and poet. He has appeared in The Australian, Southerly, and Island, among others, as well as in the 2010 Best Australian Poems. In 2005 his suite of poems Memento Mori was selected for the anthology of the Newcastle Poetry Prize, and in 2007 his piece ‘a streetlamp goes out when I walk under it’ was commended in the New Media section of the same prize.