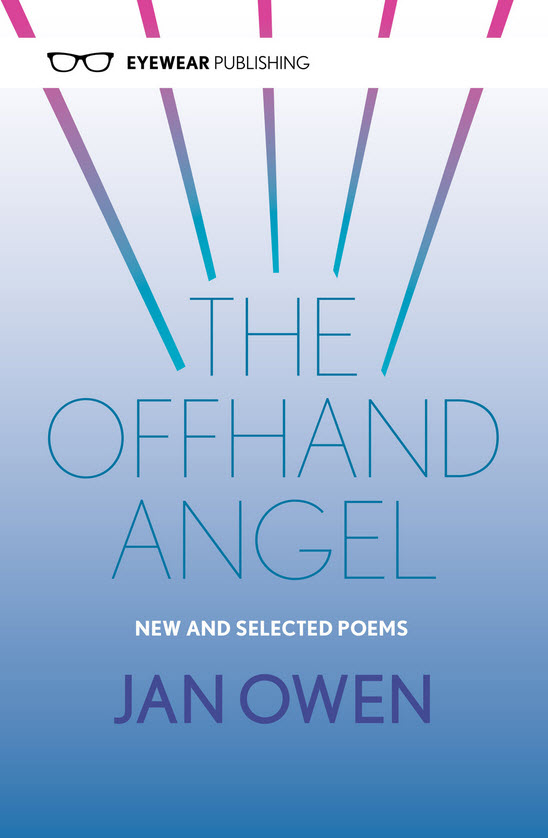 Cumming’s poetics is certainly cinematic, and he has made several of his poems into short films. One of these, ‘Flowers’, nods to the eighteenth century and with picaresque murkiness swings by the Peter Ackroyd milieu and the scholarship of Humphrey Jennings; but it is not always easy to tell whether this is following a tradition or just slotting into a well-worn, comfortable, English groove. The text of Cumming’s poems, especially ‘Office Building at Night’, is far more visual and cinematic than the filmed iterations, which is reassuring and just. For example:

Many poems push through on one breath from beginning to end, their forward motion pulling in every conceit available that might resonate. ‘Skins’, for example, exhales the feel of a pub in Essex full of English patriots:

It is an entirely artificial coincidence that Cumming’s book is published here by Pitt Street Poetry, just as Jan Owen is published in the UK for the first time, with this ‘new and selected’ survey from Eyewear Press; but it will serve. Cumming’s ‘travel’ poems are as experiential and as familiar as his domestic ones, possessing (or assuming) a relaxed kinship with each place – Serbia, Morocco, Sudan – that allows him to ruminate rather than stare. Australian poets tend to be less relaxed abroad: often they seem to stare fixedly, looking for meaning. Jan Owen does this too, but her gaze passes right through its ostensible object and into a reverie—taking in the matter at hand, tangentially. One of her earliest poems, ‘First Love’, encompasses all this: a schoolgirl, who I took to be the young Jan, falls in love with ‘The Man with Grey Eyes’ in the Titian painting: ‘hardly ideal – / he was four hundred and forty, / I was fourteen’; and early on learns the blessings and limitations of art because, ‘Of course / my fingers, sticky with toffee and bliss, / failed to entice him from his century; / his cool grey stare / fastened me firmly in mine.’

This poem resonates through her oeuvre, partly because, from this point in, cool and appraising eyes feature so much more than sticky fingers. As well, ‘First Love’ begins an interplay between art, the seeing of it, and the seeing of life that she has continued to this day, so that in her work there’s often but the faintest of boundaries between these dimensions. The poem ends, ‘Ten years later, I married: / a European with cool grey eyes, / a moustache, / pigskin gloves.’ It is almost as if she married Europe, as a kind of civil companion, and tellingly there is on the opposite page to ‘First Love’ a poem (‘Kismarton’) in which she and the grey eyes almost go home, staring across the border from Austria into an unreachable Hungary. Even more tellingly, the first line of that poem is: ‘The alliance was uneasy even then’.

There are a number of uneasy alliances in Owen’s book: among them, home and the world, humanity and nature, art and life, youth and experience, and most poignantly, love and release. In one of her most awarded poems, ‘Boy with a telescope’, her son is stargazing, and as she leaves him to it:

That Owen’s regard is expressed in a tone and with a timbre very much like that of Bertolt Brecht’s ‘Advice to the actress C.N.’ on how to wash in the morning, and is yet completely un-didactic and immensely tender, says all we need to know about her as a poet. When she looks back at her own childhood there isn’t such a regard: it is fustian and perhaps over-remembered, and with odd hints of menace, as when, in ‘History Lessons’, Stalin dies, in 1953, on the day – almost at the moment – that she starts her first period. She writes: ‘Someone was dead, / and we were allowed to be glad. / all day some distant darkness spilled through me.’

Peter Kenneally is a librarian, writer and reviewer, and poet. He has appeared in The Australian, Southerly, and Island, among others, as well as in the 2010 Best Australian Poems. In 2005 his suite of poems Memento Mori was selected for the anthology of the Newcastle Poetry Prize, and in 2007 his piece ‘a streetlamp goes out when I walk under it’ was commended in the New Media section of the same prize.

View all posts by Peter Kenneally on Cordite →