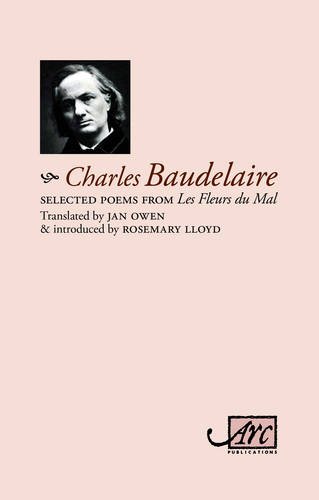 Les Murray endorses Jan Owen’s translation of Charles Baudelaire’s Selected Poems from Les Fleurs du Mal (1857) on the book’s back cover: ‘Jan Owen’s Baudelaire brings the French conjuror closer to me than any version I’d ever read.’ Although we could take umbrage to the term ‘conjuror’ being used in relation to Baudelaire, it is, on closer reflection, quite apposite. In fact it may apply to the French poet as well as his Australian translator, for both are magicians in their own way. Given Baudelaire’s impact on Anglophone poetry, poetics, and criticism, he needs no introduction to many readers of Cordite Poetry Review. If in doubt, needing a reminder, or wanting to know of his most unlikely love affair with an Australian poet and translator born over one hundred years after the publication of his (in)famous Flowers of Evil, read Jan Owen’s preface. It tells of her long-lasting infatuation with Baudelaire’s work, of her desire to translate his poetry, and of her approach to translation.

In this preface, there are echoes of Walter Benjamin’s essay ‘The Task of the Translator’ (1970). Benjamin makes three points which have endured in theories of translation. First, in claiming that one cannot speak of the relation between ‘original’ and ‘translation’ as representative or reproductive, Benjamin avoids a traditional pitfall of translation theory, one that computational lexicography has spectacularly disproved: the problem of equivalence. Indeed, machine translation and computer aided translation have demonstrated that there are irresolvable problems of idiomatic, formulaic, metaphoric and syntactic nature at the heart of translation. Benjamin, however had highlighted the problem long before the birth of computational lexicography. In ‘The Task of the Translator,’ Benjamin argues that it is no longer necessary to evaluate a translation in terms of how well it transposes the original; rather, it is the translation itself which draws on some ‘specific significance inherent in the original’. This leads him to assert that the translation ensures the survival of the original text despite the transformations and transmutations entailed in the process. Benjamin’s conclusion is that there exists a ‘pure’ language outside of the two versions of the text and their corresponding languages. Needless to say, the very idea of a ‘purity’ of language is itself problematic. But Benjamin gives us a clue as to how the puzzle might be solved: when two languages come into contact in the act of translation one has only a glimmer of this ‘pure’ language. For Benjamin, this so-called pure language, or the kernel of pure language to which he refers, however, does not lend itself to translation. Yet, all the same, as the translation is not able to communicate it, the ‘tremendous and only capacity of translation’ is also the attainment and conveying of this kernel intact. It is not clear, however, what the nature of this kernel might be, since for Benjamin it is, by definition, elusive. This elusive quality inherent in the very act of translation is comforting to our twenty-first century ears. Much has been made of the irreducible difference at the heart of translation, not least by theorists such as Blanchot, de Man and Derrida, but also by poets themselves – and the list is much too long to cite here. Nonetheless, this is the focus of Jan Owen’s preface.

Owen states: ‘literary translation may be viewed as a re-creation, a difficult balancing act relying on receptivity and empathy’. The stress on ‘receptivity and empathy’ suggests that to translate poetry is infinitely difficult and requires intuition, identification and responsiveness. In Benjamin’s terms, what is to be translated is ‘a mode of signification’. Some poems require to be translated literally. Others demand to be transposed metaphorically, or dramatically. To translate a poem is to recreate it creatively across language and time – and therefore across the fault lines of subjectivity and culture. It is a form of ghosting, and in this sense, it is an ethical act. ‘Because of its insistence on faithfulness,’ said Berman thirty years ago, translation ‘originally belongs to the ethical dimension.’ This is because ‘in its very essence’, translation is about the ‘desire to open what is Foreign as Foreign to its own space of language’, with the act of translating aspiring to ‘recognise and receive the Other as Other’ (my translation).

What I’m getting at, is that Benjamin had made this point, too, and one that is Jan Owen’s credo, if you forgive the use of the term, in her approach to translating Baudelaire’s work. Benjamin suggests that ‘a translation ‘must lovingly and in detail incorporate the original’s mode of signification’ (my emphasis). I am struck by the use of the adverb ‘lovingly’: does this mean that for Benjamin a translation should bear the mark of love? A love of the work? A love passed on to the text either written or translated, or both? A love of this palimpsest of signs we call an author? It seems that in Benjamin’s and Owen’s books, love is the context of translation, by which I mean that which accompanies the text. It is in this context that the act of translating occurs – an act that produces another text while incorporating the live body of the original text. A body that lives across language and time through its rhythms and cadences and images, yet in the process sheds its ideological and cultural cells and grows new ones.

It is exactly in this context that Jan Owen stands out as a translator of Baudelaire: in the re-incarnated body of the selected poems where the overlay of the translator’s hand is light, yet steady. The result is a collection that translates Baudelaire’s experiments with voice, texture and form across language and time in what constitutes a palimpsest of imaginary engagements with the originals, and ultimately, a loving re-creation of the poems. Take for example the first stanza of ‘Les plaintes d’un Icare’:

The use of the verb ‘truck’ brilliantly captures the sinister exchange that underpins the business of prostitution, which the word subtly modernises and contextualises for us while compensating for the loss of the alliteration of ‘r’ in the English language.

Dominique Hecq is a Belgian-born poet, fiction writer and scholar living in Melbourne. Her published works include a novel, three collections of stories, and eight books of poetry. After Cage (2019) is her latest poetry collection in English. Kaosmos is forthcoming. She has been awarded the Martha Richardson Medal for Poetry, the New England Poetry Prize, the inaugural AALITRA Prize for literary translation for poetry (Spanish to English), and the 2018 International Best Poets Prize.

View all posts by Dominique Hecq on Cordite →