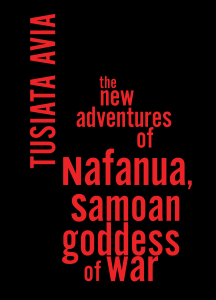 Samoan-New Zealand poet and performer Tusiata Avia explores the intricate fate history and myth have sent her way in The New Adventures of Nafanua, Samoan Goddess of War. This slim volume is divided into two parts: the Nafanua poems, followed by lyrics gathered under the subtitle ‘How I Came into this World’.

Tusiata Avia’s imaginary is rooted in an ambivalent cultural matrix made of multilayered psychohistorical, sociocultural and mythical patterns. It is imbued with multiple connotations: it reflects New Zealand’s complex history and a woman’s passionate engagement with it; it also rejects Cartesian intellectualised thought in an effort to move into a different mode of feeling, seeing, knowing, and making. If New Zealand emerges as a magnetic locus for the imagination, the poetic topos is really a site without any actual locality; it appears at diverse geographical locations as the poet roams from one imaginative space to another. Here, the body is the point of destination and departure of quests. Here, poetry is analogous to swimming under water. It is diving, moving, taking, and giving. It is pulling toward and pulling back. It is pushing forward and pushing away. It is, briefly, coming up for air. Consider this excerpt from ‘Nafanua dreams of water’:

The juxtaposition of moods in this poem suggests the destructive yet liberating force of the imagination. As elsewhere in this work, anxiety and fear often coexist with desire, suggesting the close relationship that exists between Eros and Thanatos, the intertwining of which is at the heart of experience and creativity.

The blurring of boundaries between the physical and mythical worlds is analogous to the border crossings between the conscious and unconscious forces that constitute the signifying processes in any production of meaning. The poetic voice gives articulation to this dynamic activity, where the speaking persona is constantly confronted by some unknown other. As a result, the protagonist appears to be in a constant state of becoming, indeed demands to be in a constant state of becoming. Perhaps this is because Tusiata Avia operates within the framework of a peripheral tradition. Perhaps this is because she uses an assertive stratagem in the form of a desiring body rather than a defensive one. Whatever the reason, what strikes me here is a refusal to ‘territorialise’ the body in its diverse manifestations – geopolitical, cultural, historical, colonial, amorous, and purely sexual and reproductive.

The first poem stages an encounter between Nafanua and Calamity Jane. It focuses on the painful history of their native societies and on their shared experience of exclusion, highlighting the dominant themes of the work. In particular, it dwells on the tension between exclusion and aggression while clearly advocating an ethos of compassion. It is a fragmentary text where the reader travels in all directions at once, realising that unspeakable truths lurk in the silences, the gaps between words, the blanks between stanzas. It is full of the whispers of ghosts. Yet it speaks of a refusal to succumb to repression and oppression.

As I suggest above, ‘Nafanua dreams of water’ works as an allegorical reflection on the plight of the performance poet. It breathes a corporeal contour into the craft that wavers between the materiality of the female body and the imaginary. It gestures towards the transformation resulting from a text’s being written, performed and visited upon an audience as though keeping in check jouissance.

Violence lurks under the surface of these poems and occasionally tears through the page as it does here in a carnival of images and echoes.

This proto-critique of postcolonialism is brought into relief in the next poem, a villanelle titled ‘Nafanua becomes creole’, where the colonial legacy is envisioned as dismembering. Here, the dispossessed are reduced to body parts, to racist taxonomies, to degradable materials and to both degraded and degrading metaphor: Nafanua is reduced to her belly with skin ‘as dark as an octoroon’ while her lover is ‘the colour of a brown paper bag’. In the end:

‘Nafanua talks about going to Washington DC’, ‘Nafanua sleeps rough in Central Park’ and ‘Nafanua speaks to her beloved in Palestine’ are acerbic pieces that resonate with prophetic intimations of impending catastrophes, as does the poignant piece from part two, titled ‘The opposite of déjà vu’, with its ‘armageddonish’ sky, ‘a stage for the second coming’.

Of the more personal poems from part two, ‘We, the afflicted’ is unforgettable. It tackles the theme of maternal ambivalence with astonishing honesty and clarity, linking pain with glee in the event of a mother’s separation from her child. In this section, poems focus on other people’s bodies, including the failing body of the author’s father, and revisit the themes explored in part one from a more subjective standpoint. Here is an alternative expression of trauma on individuals who, while not directly affected by it are, as in part one, nonetheless haunted by it. Here, memory is about resonances and unprocessed experiences stored in the psyche and deposited in layers of flesh.

This entry was posted in BOOK REVIEWS and tagged Dominique Hecq, Tusiata Avia. Bookmark the permalink.
Dominique Hecq is a Belgian-born poet, fiction writer and scholar living in Melbourne. Her published works include a novel, three collections of stories, and eight books of poetry. After Cage (2019) is her latest poetry collection in English. Kaosmos is forthcoming. She has been awarded the Martha Richardson Medal for Poetry, the New England Poetry Prize, the inaugural AALITRA Prize for literary translation for poetry (Spanish to English), and the 2018 International Best Poets Prize.